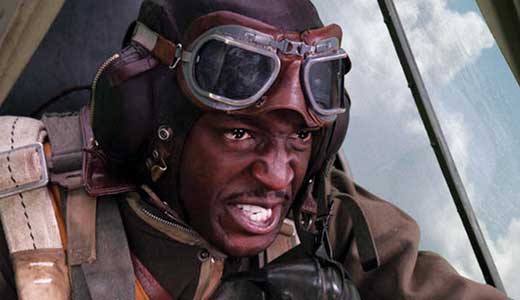 George Lucas has proven time and again that he is a master at visual magic and classic plots — but he must never be allowed to write dialogue! Luckily he only co-wrote this exciting, true tale of the Tuskegee Airmen, the all-black squad of air-aces who “fought Nazis in the sky and racism on the ground.” The terrific cast includes David Oyelowo, Nate Parker, Tristan Wilds, Elijah Kelley and especially Terrence Howard. But beware: Between Lucas’ occasional script entries and the dizzying you-are-there dogfight scenes, you may lose your popcorn. Recommended.

This quickie action/thriller toss-off would never have made anyone’s radar if not for the amazing cast. Teri Polo (2005 Playboy cover model) is the mother of a lost child; Jon Voight is the determined police detective whose search is complicated by the presence of a dicey TV psychic. Co-stars Julian Morris and Dermot Mulroney. Worth checking out.

BOB THE BUILDER: ADVENTURES BY THE SEA

As you read this, we are packing for a week on Sanibel Island with our wives. The only thing to do there is eat, sleep, drink, stumble over seashells, and screw (we get to pick two). In honor of our sacrifice, we suggest you buy this five-story set about colorful CGI rescues in Fixham Harbor. Suck it, losers.

This wildly artsy-fartsy drama/romance finds author Juliette Binoche and opera singer William Shimell exploring life, love and the concept of “original works versus copies” over the course of a long, lazy Italian afternoon. Sound dull? Not on your life. Wonderfully enigmatic, thought-provoking, warm and oddly mysterious, just like life. Now available in a Blu-ray Criterion edition.

DRIVER X4: THE LOST AND FOUND FILMS OF SARA DRIVER

If you are a fan of fantasy, sci-fi or horror films and have never heard of director Sara Driver, then you owe us a debt of thanks for telling you to run out and buy this collection. Driver combines those elements with straight-up drama and finishes with a twist of surreal, mind-bending plot elements. The result? Impossible to classify, but damn entertaining. Contains “Sleepwalk,” “When Pigs Fly” (with Alfred Molina and Marianne Faithfull), “You Are Not I” and “The Bowery.”

More spookydoins from the European version of “Ghost Hunters,” with a nice look at the Ostrich Inn, the 900-year-old hostelry in England that inspired the tale of Sweeney Todd, the barber who butchers his patrons and bakes them into pies. A dozen other stakeouts include a “real life” haunting by the real pirates of the Caribbean, and a historically accurate Army of the Dead from Serbia. Turn the lights off first.

Nice! This insane live-action sci-fi actioner from Japan will make fans of “Tokyo Gore Police” cream in their jeans! Writer/director/star Noboru Iguchi (“Machine Girl”) really outdoes himself this time as three very pretty — and only slightly mutated — teenage girls do battle for some damn dumb reason with total abandon: ripping off faces, causing heads to explode and otherwise creating carnage on an epic scale, all the while remaining sexy as hell while never getting nekkid. A visual masterpiece with some wicked cult-culture references and damn funny satire. Our highest recommendation — go and buy it!

We have always held that the 1960s was America’s greatest decade, and that this series, more than any other, represents the standard by which TV drama should forever be measured. A pair of handsome young men, Martin Milner and George Maharis (later replaced by Glenn Corbett), travel across America seeking adventure in the show’s real star, a cherry Corvette convertible. Man, what a panty-dropper! With a cool theme song by Nelson Riddle, a parade of top-notch directors and writers, and some of the greatest guest stars ever to grace the small screen (including Lon Chaney Jr., Peter Lorre and Boris Karloff as themselves — and in full makeup!), this is, arguably, the greatest three seasons of TV ever filmed. Your only purpose in life is simple: You must own this set.

This MTV series was originally written off by many as just another supernatural “Twilight Saga” rip-off, but it’s a bit better than that, being inspired by the Michael J. Fox comedy of the same name, if played much darker and sexier. Dylan O’Brien stars in 12 episodes with Tyler Posey and Colton Haynes.

THE SECRET WORLD OF ARRIETTY

Hayao Miyazaki puts his inimitable stamp on this animated version of “The Borrowers,” an amazingly delicate movie about the tiny people who live underneath our homes, living off the scraps of food and materials that we “beans” wastefully discard or misplace. Within this secret world, a young girl takes her first borrowing excursion, accidentally befriending a human boy — something that puts her entire race at terrible risk! We don’t care who you are: If you are human, you cannot help but be mesmerized.