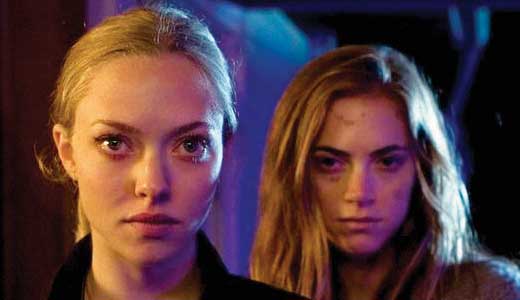 This dramatic Amanda Seyfried vehicle suffers from its PG-13 limitations, but there’s still a lot to like. She plays a young woman struggling to rebuild her life after escaping from a mysterious serial killer whom police don’t fully believe exists. Then the killer returns, this time taking her younger sister, and, again, no one believes her story. OK, so it’s a bit hokey, but the performances are solid and the cast is attractive. Apparently the studio wanted a PG-13 chick-thriller, but the material and screen-talent begs for more. Still, recommended.

This dumb, violent guy-comedy/drama simply hasn’t been properly advertised or distributed, but we liked it. Seann William Scott is terrific as a dim-witted but lovable bar bouncer who finds fame as the “enforcer” for a hopeless, small-time hockey team … despite not being able to skate. It all goes to glorious, bloody hell with help from Jay Baruchel, Liev Schreiber, Eugene Levy and comely Alison Pill from “Scott Pilgrim vs. The World.” A “Slapshot” for the 21st century.

One of those updated Shakespeare thingies that megalomaniacal actor/director Ralph Fiennes likes to dabble in. Here he leads Gerard Butler (another big-head case) into urban hell as post-war food riots turn the world upside down and Fiennes finds himself exiled, looking to forge new alliances. Lots of blood, savagery and literal back-stabbing with more than a hint of homoeroticism. Big speeches abound as the Eurocentric cast (Lubna Azabal, Ashraf Barhom, etc.) enunciates The Bard’s iambic pentameter with flawless precision. A great telling of the tale, if not for everyone.

There have been more than a dozen movie treatments of this Verne classic, the best featuring animation by Ray Harryhausen. This one avoids comparison by largely jettisoning the book’s plot in favor of time-traveling castaways from the Bermuda Triangle. A silly bit of colorful nonsense with Lochlyn Munro, Pruitt Taylor Vince, sexy Susie Abromeit (“Battle Los Angeles”) and Gina Holden (“Saw 3-D”).

This three-disc set includes 17 episodes, plus music videos and other goodies from the ABC James Bond TV-spoof cast entirely with chimpanzees! A grand, goofy and nearly forgotten series that ran for two years before it simply ran out of bad puns. With a who’s-who of voice talent including Dayton Allen, the incomparable Mel Blanc, Joan Gerber (as Mata Hairy), Steven Hoffman, Bernie Kopell from “The Love Boat” and the dulcet tones of Malachi Throne as The Narrator. Simply wonderful; a must-own.

MAN ON A LEDGE

An exceptionally stylish — if occasionally too hip for its own good — thriller that keeps you nicely off-kilter and guessing. Sam Worthington checks into a ritzy New York hotel, orders a big meal, then goes strolling on the ledge outside while crowds gather below. What the hell is he up to? And why does he insist on talking only to Elizabeth Banks (other than the obvious)? And what’s that going on across the street? The script telegraphs the plot a bit too much for our tastes, but this is still a sweet ride with too-small parts for Genesis Rodriguez, Edward Burns, Kyra Sedgwick and Ed Harris (who looks like hell). Recommended.

As far as we can tell, this is the first time this incredibly popular Jack Kelly/James Garner series has ever been released in a complete season, which is hard to believe considering how damn entertaining it is. The boys plays rascally riverboat gamblers who find themselves in all manner of comic straights — usually involving beautiful women — which they always resolve with style, wit and charm. Simply the best TV Western ever made; don’t miss it.

This tale of a soldier who collects Iraqi battlefield souvenirs is a knowing nod to those who have served in the military. The man, played as an adult by Jonathan Bennett, finds his grandfather’s footlocker at age 13. The grandfather (James Cromwell), who never discusses his military service, makes a deal with the boy: Pick three objects from the locker, and he will tell the tale associated with it. A long, gentle look at the effect of war on a person’s soul. Recommended.

Haven’t had enough of Titanic fever? Here’s a nice final word that explores and recreates the newly considered “mirage” phenomena caused by unusually cold/warm water and air masses. These could have not only have obscured the lookouts’ view of the icebergs, but also contributed to the lack of action by the nearby steamer Californian, which saw Titanic’s emergency rockets, yet did not respond.

VALLEY OF THE SUN

WE NEED TO TALK ABOUT KEVIN

Tilda Swinton looks even more pale and sickly thin than usual as the mother of a teenage boy who is, to put it in a word, evil. But is he the product of nature or nurture? Excellent storytelling with a slam-bang finish you’ll be talking about for days. Frankly, being parents ourselves, this thing scared the holy crap out of us — kids are just naturally scary!

An exceptional indie look at the Lost Generation, told in the visual language of a classic Western. A Jersey teen is just trying to find his place in the mean streets when he approaches natural leader/psychopath Mike Santo, setting the two of them on a collision course over Santo’s squeeze, a buxom blonde (Mianna Saxton). A gritty, harsh look at a generation that feels the American dream has let it down. (Oh, boo-hoo.)