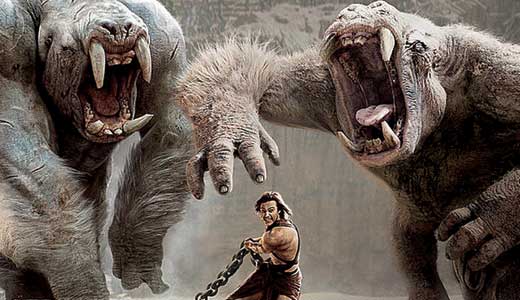 If you skipped this at the theaters — maybe turned off by all those hack reviews — then you missed the best adaptation of any Edgar Rice Burroughs creation ever put to film. It is a sprawling, magical ode to pulp fiction, beautifully realized by state-of-the-art effects and top-notch storytelling. It also had, hands-down, the worst ad campaign in the history of movies. Our only personal complaint is that the JC saga cries out for a multi-movie treatment a la “Lord of the Rings,” instead of cherry-picking ERB’s best bits from across a dozen books (plus some unfortunate made-up stuff), piling it all in a single film. Co-stars Taylor Kitsch and Lynn Collins behind the unbelievable mind of Burroughs. Get the four-disc set.

Denzel Washington and Ryan Reynolds lead an amazing cast — Brendan Gleeson, Vera Farmiga, Sam Shepard, Rubén Blades and more — in this first-rate spy action/thriller that literally crackles with excitement. Washington is a veteran agent in possession of a vital microchip, under the protection of Reynolds, a green agent in way over his head and increasingly aware that his superiors have set him up for a deadly fall. Filled with terrific set pieces, gunplay, action and romance. Our highest recommendation.

Not the recent Takashi Miike remake, this is the original 1963 film by Eiichi Kudo that set the standard for Shogun movies. An evil warlord rapes a woman and then murders both her and her family. But he is above the law and fears no retribution, putting him on a collision course with a lone warrior who accepts a suicide mission to halt the warlord’s tyrannical rise to power. Twelve brave men volunteer to help, and together they march against an army. Absolutely brilliant; our highest recommendation.

The drawing card of this military actioner is simple: There are “no” professional actors, all parts are played by real soldiers. When crazed jihadists plot to send suicide bombers into America’s heartland, the U.S. military goes into action around the world, unerringly blowing the heads off bad guys with a single shot. Authentic to the last detail and a bit hokey at times, this low-budget/high-concept vehicle is earnest in its desire to showcase the work of the Navy SEALs.

The amazing Danny Trejo (“Machete”) goes ape-shit crazy in this brutal actioner about a disillusioned Vietnam vet who becomes a viral celebrity after stopping a hate crime. But when his best friend is murdered and the cops won’t help, Danny decides to cash in on his notoriety in bloody confrontations that reach all the way to the mayor’s office (Ron Perlman). Seriously cool.

HOW TO LIVE FOREVER

A wild and wacky look at what it would be like to live for hundreds of years — and the men and women who are working around the clock to make it a reality! With special bits by futurist Ray Kurzweil, Phyllis Diller and Buster, a 101-year-old marathon runner who lives on cigarettes and beer, the whole thing is fascinating, damn funny and surprisingly poignant. Very highly recommended.

JOHN MELLENCAMP: IT’S ABOUT YOU

The full-length 8mm film shot by a father and son team traveling with Mellencamp’s 2009 Willie Nelson/Bob Dylan tour, as shown at his last performance at the Louisville Palace. The flick is good and worth checking out, but we want to take this opportunity to apologize to John for the obnoxious audience that night. Despite his constant pleas to shut up, sit down and revel in the intimacy of the Palace, the crowd hooted, hollered, posted YouTube vids, yakked, texted, puked and tweeted non-stop. Sorry, John, Louisvillians are usually more polite than that. BTW: We would love to bring our kids to your show, but the beer, roughhousing and $100 ticket prices keeps them at home. Can we try again?

Blue-screen 3-D follow-up to “Journey to the Center of the Earth” with Dwayne “The Rock” Johnson leading Michael Caine, Josh Hutcherson, Vanessa “Oh my friggin’ God!” Hudgens, Luis Guzmán and Kristin Davis scampering through a colorful menagerie of critters and props stolen from Jules Verne. Gangs of silly adventure fun for kids.

Gerard Butler stops just short of out and out hysterics in this fictional tale based on the real life of Sam Childers, a notoriously violent criminal who got religion and set out to save orphaned African children. He’s helped by tough wife Michelle Monaghan and former biker-buddy-turned-babysitter, Michael Shannon; together they smuggle weapons, carve up baddies, and practice general war-sanctioned mayhem in their quest to make the world a better place.

A succulent French morsel about a 10-year-old girl who moves to a new neighborhood and — accidentally — starts a double life: At home she may be Laure, but all her new friends know her as Mikael, a boy. She keeps the ruse going all through the summer — and finds first love — until it is time to start school and reveal her true self to world. But who is “she”? Zoé Héran (who looks like Sting) is perfect as the girl, but Malonn Lévana Malonn steals the movie as her giggly little sister. Great subtitled stuff.