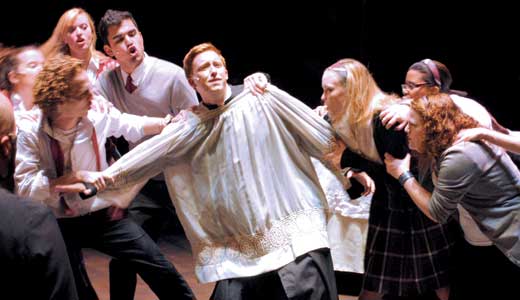 ‘bare’
Produced by Pandora Productions. Directed by Michael Drury. Continues through May 20 at Actors Theatre of Louisville. For tickets or more info, go to pandoraprods.org or call 216-5502.

A warmly lit churchy setting and the rich tones of an ancient Latin chant set the stage for “bare,” the musical by Jon Hartmere and Damon Intrabartolo now being staged by Pandora Productions in the Bingham Theatre at Actors Theatre of Louisville.

But it isn’t long before the cute, solemn choir — this Mass is taking place in the sanctuary of a Catholic secondary school — transforms into a dark, savage mob, straight from a nightmare. And a nightmare it is. Peter (Robbie Lewis), an altar boy, has drifted into a nap and is dreaming about his worst fear: being outed as gay.

Coming-of-age stories are often concerned with the little comedic deceptions that protect our private identities and shape our public images. But when the deceptions are as fundamental as concealing one’s sexual identity, comedy isn’t the likely result, and “bare,” which is sometimes referred to as a “pop opera,” has plenty enough drama to go around.

The plot revolves around Peter and his roommate and lover, Jason (Jason Brent Button). Jason is one of those students whose looks, smarts, personality and athletic ability have launched him to the very top of the school’s social hierarchy. And though Peter yearns to make their relationship public, for Jason, the stakes are too high.

The boys’ world is populated by a vivid assortment of teen and adult characters. There’s a priest given to uttering passionate platitudes (Jason Cooper). There’s a drama coach (Tymica Prince) whose production of “Romeo and Juliet” supplies a sort of dramatic and textual backstop for “bare,” and who turns out to be the only compassionate grownup in the cast. Prince also shows up in another of Peter’s dreams as a soulful Virgin Mary surrounded by shimmering dancers as she exhorts Peter to come out to his mother. And there is Peter’s mother (Susan McNeese-Lynch), who knows pretty clearly what she doesn’t want to know and expresses it in one of the play’s outstanding numbers (and in an outstanding duet with Peter).

Then there are the youngsters. There is Ivy (Katie Nuss), the pretty lass whose romantic interest in Jason drives the dramatic action to its climax. There is Matt (Amos Dreisbach), the unfortunate fellow who always seems to come in second to Jason — in academics, in the casting for Romeo, and in romance. And there is Nadia, Jason’s sister, played by Kate Holland, who pretty much takes over the show with her bracing portrayal of a dumpy, cynical teen who sees through the veneer of hypocrisy and status that privilege those who occupy the highest rungs of the high school ladder. Nadia has some of the best numbers in a show where outstanding music is in somewhat short supply.

Despite a fine cast and director Michael Drury’s fast-paced take, which elicits what the material has to offer, there’s a fair amount of sentimental chaff among the romantic numbers, and on opening night, a murky sound mix diminished the comprehensibility of some of the production numbers. Even so, the colorful production benefits from Christephor Gilbert’s choreography, Donna Lawrence-Downs’ costumes, and Karl Anderson’s sets. And when things get unleashed — as during a droll sort of rave that features the school dealer (Neill Robertson) doling out illegal delights, or when Tymica Prince sings the uplifting anthem “God Don’t Make No Trash,” the show’s energy springs to life.