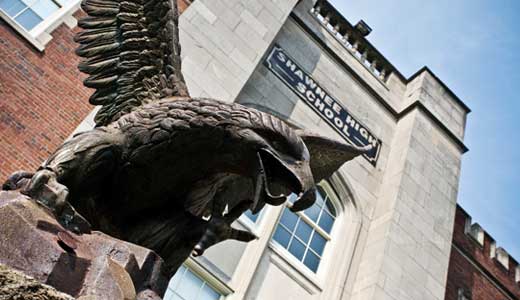 On a warm Thursday evening, the Academy at Shawnee’s auditorium bustles with anticipation. The handsome, aging space looks a little like an old book smells. And tonight, rows of wooden seats, etched into by generations of restless teens, pack a crowd of more than 100.

It’s senior awards night. One by one, teachers hand out medals and certificates to students for top GPAs or exemplary citizenship.

But the night’s highlight comes as the orange-gold curtains part. A slideshow of senior pictures begins on a large screen as R. Kelly’s “The World’s Greatest” plays in the background. For 74 of Shawnee’s 89 graduating seniors, their portrait is coupled with the name of the college they’re slated to attend next year. (Two will head into the military.)

This is a feat.

The Gaining Options for College Collaborative (GO College), a partnership of the Council for Opportunity in Education (funded through the U.S. Department of Education) and the GE Foundation, proudly claims some credit.

GO College aims to boost the number of low-income, minority and first generation students attending college. A five-year, $3.9 million grant awarded in 2011 targets a handful of Jefferson County high schools, including Shawnee, and is part of a larger, nationwide $24 million initiative.

The grant, administered through University of Louisville and Kentucky State University, has paid for college educators at Shawnee, Fern Creek and Moore high schools. An additional federal grant awarded to JCPS has also beefed up personnel solely dedicated to helping kids navigate the ACT, financial aid forms and scholarships.

In the auditorium, roars erupt for the four students attending U of L. The majority of Shawnee seniors, 52, are headed to Jefferson Community and Technical College. This year, all Shawnee seniors had to apply to JCTC. It cemented the joy of an acceptance letter as well as a backup plan. That mandate helped the school’s college acceptance numbers rise.

Anthony Smith, with the Network Center for Community Change, volunteers at Shawnee helping with the
GO College initiative.

He sits toward the back of the auditorium, snapping pictures with his phone, beaming with pride. A lot of the kids Smith has worked with are first-generation college students. So he knows the true test will come in the next several months.

“They get in. They still need support,” Smith says. “I think what happens is the community sees you get in and they think you’ve grown, you can make it on your own. And I think folks still need that support system.”

It’s not uncommon among this population of first-generation college-goers to abandon the institution they’ve been accepted into. Perhaps a job, childcare or finances reversed their plan. Data from 2010 bears this out.

When the school year ended at Shawnee, roughly 60 percent of students had opted for a four-year, two-year or vocational school, according to district data. But the National Student Clearinghouse reported only 34 percent followed through in the fall. In 2011, that number dropped to 33 percent.

As students filter to a nearby room to feast on cupcakes, Shawnee’s principal, Keith Look, reflects on what lies ahead for his graduating class.

“How many of them will actually show up on campus and begin the process? It’s tricky,” he says. “I’d love to break
50 (percent).”

In a compact room, down a hallway lined with college acceptance letters, Melissa Helton-Allender feels hints of anxiety when she thinks about Shawnee’s seniors.

This is her first full year as the school’s college access resource teacher, one filled with challenges. She’s helped kids who vow they “hate” school to opt for vocational programs. She’s propped up kids who suffer the disappointment of a rejection letter. For many students whose parents are incarcerated, homeless or reluctant to fill out complex financial aid forms, she’s put hours in on the phone, writing letters.

But come graduation, she’ll confront yet another hurdle — making sure kids show up to orientation and stick with classes. Data shows less than a quarter of students at two-year institutions finish in three years. Dropout tends to occur within the first 15 credit hours. (Four-year colleges are better at hanging onto newcomers.)

“There’s a little bit of that nervousness of knowing I’ve got to make sure I’m following up with them,” she says. “And make sure they’re doing what they need to be doing, because it doesn’t stop here.”

Helton-Allender has connected JCTC staff with kids. And organizations like the Network Center for Community Change and the Louisville Urban League are also trying to widen that support system.

Even if there is a dip in how many kids commit to college come fall, Vicki Lete believes these federally funded programs encouraging postsecondary education
are working.

She’s the principal of Moore High School, where a program similar to GO College has been in place for a few years. The school’s college participation rate has slowly increased, according to the National Student Clearinghouse. This year, 51 percent of seniors have been accepted into college or vocational schools.

“There’s other ways to measure than just the clearinghouse,” Lete says. “I’ve got more kids graduating.”

Part of the program includes outreach to freshmen. It’s an area these targeted schools need help with. Of the 142 freshmen who ended their 2008-2009 school year at Shawnee, 55 will walk across the stage on graduation day. Part of that stems from the high mobility of these students, but several drop out.

“A good indicator of whether a kid will drop out of high school is their grades freshman year,” says Helton-Allender, who taught at Shawnee for eight years prior to her current post. “Those kids kind of give up.”

With “one and a half” guidance counselors at Shawnee, it would be nearly impossible for them to focus solely on coaching kids for the post-high school years. While on this day Helton-Allender’s “college access” office is empty as kids rehearse graduation, most days, she says, she’s swamped.

Anthony Helton is one of the Shawnee seniors who has been at the school since his freshman year. He’s headed to JCTC in the fall and says “there’s a big difference” when it comes to how students now perceive college. He noticed last year flags from area universities popped up in the hallways. Teachers intensified their push for continuing education.

Asia Ware, a senior who’s headed to University of Kentucky, says the extra support at Shawnee guided her toward her college dream. At home, she says, there’s “a lot going on.” She’ll be the first in her family to tackle a four-year university.

“I’m the only one focusing on this. So there’s no one like, ‘Go to college, go to college,’” she says. “They want me to, of course, (but) their mind is everywhere else. But I do have a lot of teachers, church members helping me, pushing me.”

She’s secured $11,000 of her $17,000 tuition. That $6,000 gap is a bit nerve-wracking. But she’s confident it will work out, either through a job or scholarships. She’s not quite sure what she wants to study, maybe broadcast journalism. But she’s fully committed to life’s next chapter.

“It’s the only way out … out of the struggle, out of poverty, out of a lot of mess going on these days,” Ware says. “I know at the end of the day, I’m going to make it.”