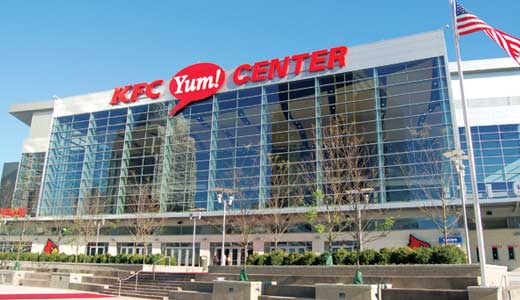 Though a great deal of mystery has surrounded the attempted ouster of Kentucky State Fair Board President and CEO Harold Workman — and the subsequent firing of Yum! Center general manager Ted Nicholson by Workman two days later — a whistleblower lawsuit filed by Nicholson may finally shed light on the drama.

In the lawsuit — which echoes claims previously reported by LEO Weekly — Nicholson alleges he was retaliated against by Workman for being too forthcoming with auditors examining the finances and management of the Yum! Center, which is operated by the Fair Board and whose profits have been much lower than forecasted.

“In terms of his termination, it’s a textbook case of what the whistleblower statute was enacted to protect folks from,” says Bo Bolus, Nicholson’s attorney.

“Waste, mismanagement and misuse of government funds were what my client was concerned with. He was doing the right thing for the right reasons. His compensation package was not tied to profitability of the arena, but he still was focused on that because he wanted to do a good job, and he got canned.”

The lawsuit — filed April 27 — is a scathing indictment of Workman’s handling of the Yum! Center.

Besides accusing Workman of implementing an internal structure at the arena that “neutered” Nicholson’s ability to oversee its financing, guest services, marketing and sales, the lawsuit alleges that Workman handpicked almost all of the center’s employees, many of whom “were personal friends of Mr. Workman and/or woefully unqualified for their respective positions.”

The lawsuit further claims Nicholson voiced frustrations about overstaffing at events and overpayment of staff, but they were not addressed, with Workman allegedly telling him “Don’t worry about it,” or “Everything will be fine.”

In September 2011, Venue Services Group, a consulting firm hired by the Arena Authority to review Yum! Center operations, interviewed Nicholson. The lawsuit claims that their draft report, released internally that November, “confirmed and agreed with most, if not all, of the complaints of financial waste and mismanagement made by Mr. Nicholson throughout the course of his employment.”

The lawsuit further asserts that upon receiving this draft report, Workman “verbally berated” Nicholson, stating “he didn’t know who Mr. Nicholson thought he was,” that he never should have provided such information to auditors, and that he would make sure the report “never saw the light of day.”

In response to the audit, Workman assured Arena Authority officials he would take the necessary steps to improve the arena’s performance, according to the lawsuit, but some were “apparently unhappy” with Workman’s follow-through, which led to a movement in February to oust him from his position.

Two business days after Workman survived this attempted ouster, Nicholson was fired. Neither Workman nor the Fair Board has given a reason for the firing.

Fair Board spokeswoman Amanda Storment tells LEO they have no comment on the lawsuit, and defense attorney Kenyon Meyer of Dinsmore & Shohl did not return a call or email seeking an interview. The Tourism, Arts and Heritage Cabinet — which oversees the Fair Board — has a contract with the law firm to provide outside legal services. The firm will bill the cabinet at an hourly rate.

Both the Tourism Cabinet and Gov. Steve Beshear’s office declined to discuss the lawsuit.

In February, Beshear admitted that he backed the effort to remove Workman, and in a press release following Nicholson’s firing, he referred to Workman’s move — just before the NCAA Tournament came to the Yum! Center — as “unfortunate and ill-timed.” During the Fair Board’s February meeting, Marcheta Sparrow, secretary of the Tourism Cabinet, made a motion to go into closed session to discuss personnel matters, including Workman’s future. Though Workman survived the attempted removal, he later announced plans to retire at the end of this year.

Ron Carmicle, chairman of the Fair Board’s board of directors, wrote a letter to Workman on behalf of the board’s executive committee following Nicholson’s firing. In it, he called for Nicholson to be rehired, warning that Workman’s action “could be perceived as vindictive or self-serving.” Carmicle — who called for greater financial accountability to the board and a succession plan for Workman at the Feb. 23 board meeting — did not respond to inquiries about the lawsuit.

Since LEO’s March 7 article detailing questionable hiring practices and exorbitant raises at the financially troubled Fair Board, more than 10 employees have contacted the paper with additional tips about mismanagement. However, due to what they describe as a culture of retaliation at the agency, none were willing to go on the record with their complaints.

All available evidence suggests that efforts to remove Harold Workman stem from financial difficulties of the Yum! Center — specifically, the Arena Authority’s ability to make debt payments on $349 million in construction bonds.

Though a good portion of the debt payments were to come from TIF revenues — a financing method that relies on anticipated tax dollars — those have been well below expectations, with the district producing $2.1 million in 2011, below the projected $6.7 million. The authority will be able to make the current debt payment by dipping into surplus funds, but narrowly escaped having its bonds downgraded to “junk” status.

This difficulty meeting payments is exacerbated by profits from the Yum! Center falling well below projections. Though revenues at the arena were higher than expected in 2011, operating expenses were double what was anticipated — leading to a meager profit of roughly $350,000, far less than the $1.2 million projected.

Efforts to right the ship have been ongoing since February, when the Fair Board hired a CFO to report directly to the board instead of Workman. In March, the board approved a study to analyze what role the Fair Board should play in the Yum! Center’s operations.

At the Arena Authority’s April 16 board meeting, the final draft of the Venue Services Group report was released, detailing some of the financial and management problems Nicholson alleges he relayed to auditors.

Specifically, the report says the arena’s expenses are greater than other similar venues, with recommendations to give the general manager — a position that’s currently vacant — more control over staffing, booking and finances, and perhaps the creation of a separate management company to operate the arena.

The report states that “information was requested from (the Fair Board) on staffing allocations, but no information was provided for purposes of this review.”

The Fair Board has denied LEO’s open records request for the original draft report by Venue Services Group — arguing draft documents are not subject to such requests — so it is still unclear how much of the original report made it into the final version, or if much of that information still hasn’t seen “the light of day,” as Nicholson alleges Workman declared in November.

Bolus, Nicholson’s attorney, predicts the trial will shed more light on mismanagement within the Fair Board, perhaps as much as the recent headline-grabbing findings of state Auditor Adam Edelen’s investigation into Richie Farmer’s tenure as commissioner of agriculture.

“This may not be as sexy on it’s face as Richie Farmer shooting deer with an employee field dressing it for him on government time, but I think discovery will tell that this has a potential to be of a much larger scale,” Bolus says. “There’s a cloud of suspicion surrounding all of this, I think it’s fair to say.”