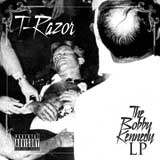 T-Razor commits a rap cardinal sin on the last song: He actually asks for his headphones to be turned down. This must be his last album before he goes folk, covering up Tupac tattoos with Hank Sr. quotes and Okeh logos. Outside of that violation, T-Razor has turned in his opus. The Bobby Kennedy LP is, by far, his best work, and this is coming on the heels of his excellent 2 the Top collaboration with Johnny Spanish. The album is almost magical in that everything has come together for Razor this time out. Gone are a lot of the gangsterisms of old; this is an older, wiser emcee, even if the smoke is still thick. There’s not a bad cut here, but I’ll tip the hat to the beautiful production of “Angela Davis” as our highlight.