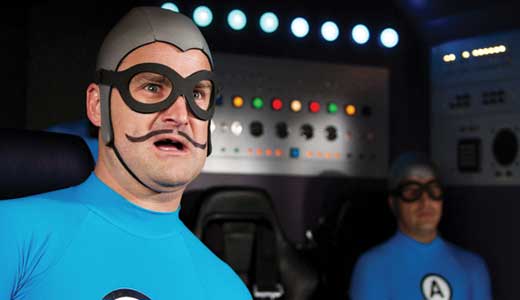 Christian Jacobs has lived many lives in his 40 years on this planet. Today he is star, co-creator and executive producer of the campy Saturday morning show “The Aquabats! Super Show!,” which stars his long-running New Wave pop-punk band, The Aquabats. It took 15 years for the band to achieve their dream of having their own TV series, and it took the success of Jacobs’ previous creation, “Yo! Gabba Gabba,” to ease the way.

Jacobs began his show business career early — as a child actor, appearing on “Married … with Children,” “Major Dad” and more. A role in the skate movie “Gleaming the Cube” led the L.A. resident to the local skate and punk scenes. In 1995, the Aquabats released their first album, standing out with a costumed stage show and storylines about superheroes battling villains. (Jacobs’ character is known today as “MC Bat Commander.”)

After the band’s initial success wore off, Jacobs and writing partner Scott Schultz developed “Yo! Gabba Gabba,” the hugely popular and weirdly psychedelic series hosted by a hip DJ for pre-schoolers (and their still-with-it parents, and/or stoned college students). Their vision finally confirmed by a mainstream audience, Schultz, Jacobs and the rest of the band premiered “The Aquabats! Super Show!” on the new kids’ channel The Hub in March. The first season has featured guest appearances by “Weird Al” Yankovic, Jon Heder of “Napoleon Dynamite,” comedian Paul Scheer, and ’70s game show star Rip Taylor, and follows in the tradition of Saturday morning cross-generational classics like “H.R. Pufnstuf” and “Pee-Wee’s Playhouse.”

“We really wanted to be put on Saturday mornings, in the tradition of that,” says Jacobs, “and we’ve been getting a lot of feedback from fans online and friends, saying, ‘It’s so awesome, we can’t wait to wake up and watch the show on Saturday mornings.’”

LEO: The last great network Saturday morning show was “The Weird Al Show,” which ended in 1997. You probably could have had this show on back then, but it took almost 15 years. Did Al give you any tips?
Christian Jacobs: Yeah, we talked about his show, actually. I was a big fan of his show as well … Al was like, “I’d been trying to do a show for a long time, and it came together, but there were so many rules and regulations, the network has this-and-that-and-the-other-thing; it was really an unpleasant battle to make that show,” which surprised me. He’s saying that standing there in a superhero outfit (laughs), because we were in between takes.

Jacobs praises cable and the Internet for giving writers and performers more chances to make shows like his, and with less restrictions. And though the initial broadcast audience might be smaller, such offbeat productions now have many more ways to be discovered.

LEO: The Hub’s target audience is between 6 and 11 years old. How difficult is it to balance making it fun for them and for adults?
CJ: I want to say “it’s impossible, you can’t do it, I don’t know how we discovered this magic formula,” but … “Spongebob” did it great, “The Simpsons,” so many shows do it great. For the kinds of things we’re referencing and homaging, I didn’t know it if would work for kids. I knew I liked it, I knew our peer group would enjoy it; it was just making sure it was appropriate for kids, that it wasn’t too violent, that kids could still benefit from watching it somehow. But being so close to the Aquabats, I always wondered, “Is this really going to be accepted by kids?” Or are kids just gonna go, “Oh, this is old, I’m gonna go watch ‘The Avengers’ or ‘Iron Man.’” There’s all these way more slick things out there, but we’re seeing that kids really do like it.

After so many years with the band, I’m just so glad that people are responding. It’s really surprising and satisfying for us, and I think the show can only get better and better as we keep reaching out there, do stuff that’s different and unique. It does come from a real punk-rock sensibility that we all grew up with. We grew up in a good time with punk and hip-hop and underground culture becoming mainstream; we’ve basically been applying that DIY ethic to making a television show.