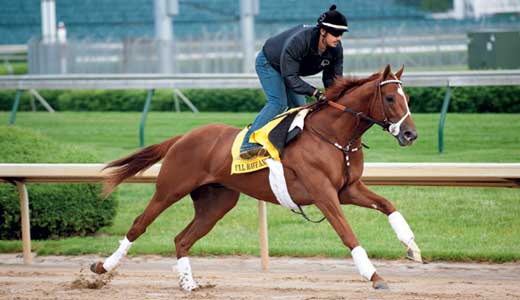 This handicapper got onto I’ll Have Another the same way most people pick the Kentucky Derby: something catches your eye — and that’s your horse.

All that scientific stuff? Speed figures? Workout clockings? Determining which is the oldest owner who most deserves to finally win the Derby before the bugler blows taps? Nah. Save all that technical stuff for when nothing strikes your fancy.

The I’ll Have Another story goes back to February, when the horse was just one of several unheralded prospects entered in the Robert L. Lewis Stakes at Santa Anita. The race is named for Bob and Beverly Lewis, who won the Kentucky Derby with Silver Charm and Charismatic, back when California horses had a little mini Gold Rush going in the Kentucky Derby. Those two, plus Real Quiet and Fusaichi Pegasus were four straight California winners from 1997-2000. Giacomo won it in 2005.

Anyhow, in this Santa Anita race, I’ll Have Another simply ran off.

A minute later — when others might have returned their attention to basketball — we dove headlong into the dusty archive of thoroughbred bloodlines. And bingo, there it was: an ideal Kentucky Derby pedigree for I’ll Have Another — Raise a Native sire line on top, with the dam’s line tracing to stamina stallions of yesteryear, including Hail to Reason, Princequillo, Ribot, Stage Door Johnny, Nijinsky and Sea Bird.

Of course, that was Feb. 4. It is a long time from then to now, and everyone knows how Derby prospects bloom and wilt.

For the next two months, I’ll Have Another trained, but did not race. Trainer Doug O’Neill skipped the San Felipe States, won stylishly by Creative Cause, and instead brought I’ll Have Another along with a series of stamina-building workouts — six furlongs, seven furlongs, a mile.

In the Santa Anita Derby, young rider Mario Gutierrez placed I’ll Have Another third behind the early pace, then rolled three-wide through the stretch to nail Creative Cause at the wire.

O’Neill said he would continue to train I’ll Have Another forwardly, promising his horse would arrive at Churchill Downs “locked and loaded and ready to run.”

Last Friday, O’Neill worked I’ll Have Another three-quarters of a mile at Hollywood Park, then put him on a plane for Louisville on Saturday. Sunday morning, I’ll Have Another was on the track at Churchill Downs, tugging at the reins of exercise rider Johnny Garcia.

“It’s exactly what we do every day,” Garcia says. “He always gallops very strong, and he’s happy doing it.”

Coming off the track, Garcia gave O’Neill a “thumbs up,” with the trainer telling his rider, “That was perfect, just perfect.”

Fans attending “Dawn at the Downs” this week can look for our Derby pick on the track at 8:30 a.m. with the other Derby colts and Oaks fillies. The son of Flower Alley is a bright reddish-gold chestnut. Likes to tuck his head low when running and, indeed, is equipped with an “overcheck” bit to keep his nose up so the jockey can steer him.

Of course, if I’ll Have Another doesn’t fire, it opens the race up to a long list of talented stars, including:

Hansen — the almost white horse that is partly owned by Louisvillians Jim Shircliff and Dr. Harvey Diamond. Louisville owners haven’t won the Kentucky Derby in 106 years, but Hansen has stamped his quality and might run the others right off their feet.

Union Rags — the very image of a thoroughbred racehorse, owned by Phyllis Wyeth, the daughter-in-law of American painter Andrew Wyeth.

Dullahan — looked terrific in the Blue Grass and has been brought to a peak by trainer Dale Romans. After Dullahan worked Saturday, the barn was jubilant. They love their horse’s chances.

Creative Cause — dances every dance with the stars.

Alpha — missed some training, but pedigree suggests he might know what to do with an extra eighth-mile.

Went the Day Well — saves his best for the stretch.

Bodemeister — ran away with the Arkansas Derby.

All quality horses, and probably the finest Kentucky Derby field in memory. But I’ll Have Another is the pick.

A horse for the money

Now we need an exacta horse. Something that can come along to fill out the bottom half of a big exacta. Maybe a whopper trifecta.

What you want is a horse hardly anybody is looking at that comes along late passing all the tired horses. Perfect for the role is Went the Day Well.

The horse is named for a 1942 British World War II movie, and England is where owner Barry Irwin found Went the Day Well for the Team Valor International syndicate. Team Valor won the Derby last year with Animal Kingdom, and Captain Bodgit was second to Silver Charm in 1998.

Shipped back across the Atlantic (he was bred in New York), Went the Day Well won on the dirt in Florida, then captured the Vinery Spiral Stakes at Turfway Park over a Polytrack surface. But Irwin was hoping the son of Proud Citizen would like the Churchill Downs dirt best of all. “But don’t expect much when you see him work at Churchill, though,” cautioned Irwin. “He’s a lousy work horse.”

Au contraire. On Saturday, Went the Day Well skipped a nifty five furlongs in 1:01 in his first try over the Downs dirt — while hardly drawing a deep breath. Very quiet and light-footed over the sandy loam.

“This is by far the most impressive work he’s ever done,” says trainer Graham Motion. “He’s not a flashy work horse, and even now he’s not blowing hard.”

The caution on Went the Day Well is he’s never faced the kind of crack competition he’ll meet in the Derby. He’s a guess.

We also like Alpha, based on bloodlines. And Take Charge Indy has trained like a dream since winning the Florida Derby. The latter flies to Louisville mid-week, and may come right off the plane running for trainer Patrick Byrne and rider Calvin Borel. Who knows?

One sad note: The 138th Kentucky Derby will be the first in more than six decades to be run without Julian “Buck” Wheat in attendance. The longtime director of Horsemen’s Relations at Churchill Downs, whose first job at the track was as an usher for the 1949 Derby (Ponder won it), died this past winter at the age of 78.

Known as the “Mayor of the Backside,” Buck knew everybody on the track and helped make the Derby as memorable as possible for visiting horse people. Thousands of Louisvillians knew him as a wonderful ambassador of horse racing and the Kentucky Derby.