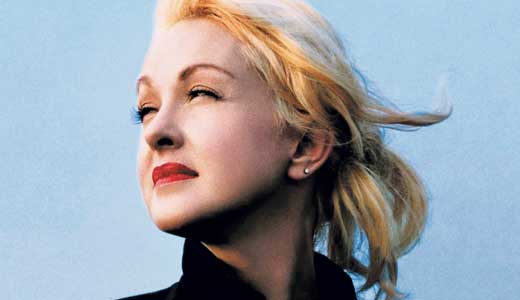 As if fried chicken wings and cold beer aren’t enough of a reason to go to a charity function at Buffalo Wild Wings in the Highlands, they’ve decided to go one better — you can meet Jean Cruguet, the now-retired jockey who rode Seattle Slew to a sweep in the 1976 Triple Crown. Cruguet will be signing photos (in exchange for a donation), and proceeds will go to Permanently Disabled Jockey Fund, a charity that provides much-needed financial assistance to disabled jockeys. In addition to Cruguet’s signing, photographs of Seattle Slew, Secretariat, Barbaro and more will be raffled, plus there will be a silent auction and drink specials. Ready to get your Derby week out of the starting gate? This is the place. And they’re off. —Kevin Gibson

When it was announced that Cyndi Lauper would be the grand marshal of the Pegasus Parade, the rebellious, pink-haired teenager in me threw my fist up and shouted, “Fuck yeah!” My officemate rolled his eyes. I managed to catch her by email. —Sara Havens

LEO: If you could throw anything out to the crowd, what would it be?
CL: Something soft … bubbles??

LEO: Any chance you might come back for our Pride Parade?
CL: Wish I could, but I hope it’s a good one.

LEO: What horses are you betting on?
CL: I love horses … worked as a hot walker at the Belmont track in New York when I was young, so I can’t pick just one. I hope they all win! Lol!

As Derby week kicks into high gear, there’s no shortage of star-studded soirees. And while I’m usually more of a cheap-beer-at-a-dive-bar kind of a girl, I’m willing to get fancy for a good cause, which is what Ferdinand’s Ball is all about. Now in its third year, this burgeoning Derby tradition raises money for Old Friends, a not-for-profit farm that provides a home for retired racehorses that might otherwise be slaughtered. At the $100 level, guests are privy to an open bar (with an array of bourbon!) and gourmet hors d’oeuvres (with Derby-themed bourbon balls for dessert!), as well as a silent auction, photo booth, live music and celebrity schmoozing with the likes of an NFL linebacker, Miss Kentucky, and model-turned Real Housewife Brandi Glanville. Higher-priced tickets come with VIP access and gift bags. Do it for the horses… —Sarah Kelley

If cheap beer and chicken wings are your idea of a good time (and if you didn’t fill up on the stuff at the previously picked Derby Wings Charity Bash), then The Bard’s Town just might be your mecca for merriment come Derby Eve Eve (better known as Thursday). As host of the 22nd annual Wing Ding — a tradition formerly celebrated at Louisville’s German-American Club — the Bard is offering $2 Bud and Bud Light drafts, 50-cent wings, and $1 shots from an ice luge. (That’s right, ice luge.) Both the front and back patios will be bustling with Wing Dingers, while The Jake Parker Band and Bury’n McIntyre provide live tunes. —Sarah Kelley

This is some other-level-meta shit, so hold on tight: Rí Rá, one of Louisville’s top 12 Irish-inspired bars (only bars in Ireland can truly be “Irish bars”), hosts a local group paying tribute to a London-based band who played music inspired by both the punk and traditional folk sounds of their native Ireland … just in time to celebrate the Kentucky Derby (aka St. Patty’s Day, May-in-the-Bluegrass edition). The Fauxgues (pronounced “foe-gs,” as in “fake Pogues”) celebrate the poetry and partying of the Pogues, the best band in the world circa 1988, who imploded because of their overindulgences; this local collective of Ladybirds, Squeeze-bot, and Junk Yard Dogs members keeps the flame alive. (Locals wishing to avoid tourists: See them at the Mag Bar on Saturday.) —Peter Berkowitz

Virginia-based artist Robert Joyner created the expressive new watercolor-and-charcoal logo for the 2012 Kentucky Derby and Oaks, and he will be signing the official prints of his work at the races. You’ll have to stick to a very specific schedule if you want to catch him: On Oaks Day (May 4), he’ll be in the Kentucky Derby Museum lobby from 11 a.m.-noon. From 2-3 p.m., he’ll sign at Gate 18 inside Churchill Downs. From there, he’ll move to Millionaires Row at 3:30 p.m. On Derby Day (May 5), he will return to the Derby Museum at 11 a.m., and from 2-4 p.m. he’ll finish up the day signing at Gate 18. To those of you who still want one after reading all that, we salute your chutzpah. —Simon Isham

All the locals know the party doesn’t stop after the last horse crosses the finish line. Derby night in the ’Ville will be teeming with parties, including the fabulous Down & Derby at the Water Tower. This open-bar event benefits the Louisville Youth Group and has a handful of celebrities who will make you dance off the day’s winnings … or forget about the losses. Reichen Lehmkuhl from Logo’s “The A List” will be a guest, as will Latrice Royale from season 4 of “RuPaul’s Drag Race” and DJ Brynn Taylor. Let your hair down and kick off those heels — this casual attire party is the perfect way to keep that track buzz fueled into the wee hours of the morning. —Sara Havens

‘Derby of the Dead’

“Isn’t the zombie thing dead by now?” my editor asks. “Indubitably so,” I say. But if you’re in the fraternal order of the walking dead, then I think dead might be exactly what you were hoping for. And this Derby, if whimsical hats and bowties, mint juleps and racing forms get to be too much for you, then definitely check out “Derby of the Dead,” a zombie-themed Derby party guaranteed to raise the dead. Once the ponies are safe in their stables, the undead are free to roam, congregating at the newly deemed “Zombie House.” There will be live music from Carlfox, Vaderbomb, DJ Andrew Kim and more — not to mention a money drop at midnight. So come on out for this inaugural gala that will hopefully become a tradition for generations of undead to come. —Brent Owen

In the midst of the Derby hullabaloo, Lexi Bass and Tenille Novinger, both of the University of Louisville, are celebrating completion of master’s degrees in fine art with a thesis exhibition. Bass brings “a modern secular space for spiritual self-reflection” with a film to encourage “reflection on morality with respect to both animal and human idealism.” She shares this exhibit with Novinger, who uses “repurposed feminized objects to create a contemporary dialogue about the traditions of courtship, marriage and divorce.” Lace, slips, wallpaper and, of course, doilies combine with text to bring her metaphors of relationships to fruition. —Allison Ray

Gibbs Rounsavall’s latest show is “How to be an artist 101” — basically, just do it. He assigned himself the task of drawing every day for a year. “On Aug. 30, 2009,” says Rounsavall, “I challenged myself to produce one finished piece every day for exactly one year. Keeping with Milton Glaser’s philosophy, ‘Limitation stimulates the imagination,’ I limited myself to making only self-portraits … and any mark-making tool I could find. Each drawing was completed with a caption, thus becoming both a visual and written record of the year. The result of the project was my gaining of a broader, truer sense of self and the reminder of how essential play is in the creative process.” There is a catalog featuring his 365 drawings available at the show. —Jo Anne Triplett

Painter Meg Krakowiak is a recent transplant to Louisville. The visual art community is better for it, because she’s decided to open up a studio/gallery In the Mellwood Art & Entertainment Center. “I really want to get involved in Louisville,” she says. “I am donating a piece of art for the auction for the Taste of Frankfort and plan to donate proceeds to a charity for my next opening.” She describes her art as “happy — I love beautiful. I create paintings from subjects that inspire a feeling in me. Trees, a house, a look. Everything has a story. I try to capture the tale with vivid colors and energetic brush strokes.” There’s no doubt we’ll be seeing more of Krakowiak and her work. —Jo Anne Triplett