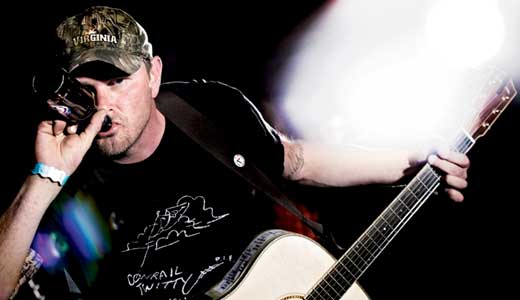 You’ve seen him on Letterman, Conan, “The Tonight Show,” “Chelsea Lately” and “Comedy Central Presents.” You’ve heard him on “The Howard Stern Show” and “The Adam Carolla Show.” Greg Fitzsimmons has made a name for himself by offering biting observations on our pop culture-obsessed society. He’s sardonic, irreverent and intelligent. He has worked as a writer (and won Emmys) for “The Ellen DeGeneres Show” and on “Lucky Louie” with the brilliant Louis C.K. Now he hosts his own top-rated podcast, and he published the bestselling book “Dear Mrs. Fitzsimmons: Tales of Redemption from an Irish Mailbox” in 2010. When he comes to Louisville this weekend, he will be working on a whole new hour of stand-up for an upcoming special. Fitzsimmons is a show not to miss. —Brent Owen

Three years after her husband’s death, Marge has determined that her life is in need of a makeover. But in the process of reinventing herself, her son and daughter re-emerge, each with startling news. “Upon the very first read,” says executive director Doug Schutte, “we knew we had a play we simply had to do. And the fact that it’s a piece by a playwright as accomplished as Nancy (Gall-Clayton) makes it positively perfect.” “The Snowflake Theory” was part of Beyond the Borscht Belt: A Jewish Theatre Festival in Columbus, Ohio, and was a finalist at Southern Appalachian Repertory Theatre’s ScriptFEST and for the Southeastern Theatre Conference’s Getchell Prize. Gall-Clayton’s piece “Encounter at the Ink Spot” was part of The Bard’s Town’s “Ten-Tucky Festival of Ten Minute Plays” last year, and she has had other work produced in 20 states, as well as Canada and Australia. —Jane Mattingly

What do you do when you find yourself broke and out of work? Become a stripper, duh! Based on the 1997 British comedy, this CenterStage production centers around six unemployed steelworkers from Buffalo who decide to bare it all to make ends meet. Of course, there’s more to it than body grease and banana hammocks. “‘The Full Monty’ is about so much more than stripping — that’s only the last few minutes of the show,” says artistic director John R. Leffert. “It’s a show about real people and their everyday struggles, with a tremendous amount of heart.” I feel the same way about Playboy magazine. —Sara Havens

“Freedom is more vital than a job. I’m 35 years old and I don’t work worth a shit, but I’m free as a motherfucker. And now I’m playing country music.” These are the fightin’ words of Tim Barry, former vocalist of the Richmond, Va.-based hardcore group Avail. Although the rough-hewn and often political musician is always outspoken onstage, he’s usually reserved and shy offstage. Perhaps as a result of this, he originally considered his solo act a side project, but it may indeed be more famous now than the work of the punk band. Of course, a lot of his former style has carried over into his newer work; simple rock chord progressions and honest lyrics endure, sustained in the plink of banjos and “everyman” storytelling narrated in his deep Southern accent. For this branch of his tour, he’ll be playing with Jenny Owen Youngs and Quiet Hollers. —Simon Isham

If you haven’t gotten a chance yet to plant that summer garden, there’s no time like the present. You’re definitely not too late … and if you check out Locust Grove’s Gardener’s Fair this weekend, you can even buy some flowers, herbs and plants already in bloom. There will also be experts there to answer any questions about weird weeds and pesky bugs, as well as tools, art and accessories available for purchase. A silent auction offers goodies like a box at Churchill Downs, Cardinal basketball tickets, lunch at Proof on Main, a quilt, garden bench and much more. Give that green thumb a reason to live. —Sara Havens

Barking at the Brewpub

If your two biggest loves in life are dogs and beer, the BBC in St. Matthews is the place to be on Saturday. Not only does this event celebrate the reopening of their dog-friendly patio for the spring (The Wort Dog Café), but all money collected from the silent auction and a portion of the beer and food sales will go toward the well-being of your puppy’s brethren at Saving Sunny and the Kentucky Humane Society. There will also be a wide variety of culinary treats from local vendors for your four-legged friend, and you can pick up a dog for adoption if one happens to melt your heart. There will also be live music from Rude Lucy and The Potluck Ramblers. Woof? Woof. —Joe Sonka

Internationally renowned sculptor Deborah Butterfield is the main speaker at the Speed Art Museum’s next “Artist Dialogues.” She will discuss her work as well as her love of horses and dressage. Other members of the panel are local artists Chris Radtke and Gaela Erwin, with curator of contemporary art Suzanne Weaver directing the conversation. They will talk about the artistic process and how one’s passions are reflected in art (Radtke and Erwin are also accomplished horsewomen). The museum has recently acquired Butterfield’s horse sculptures “Danuta” and “Burnt Pine,” which are on view in the show “Inside|Out.” The panel discussion and exhibition are included in museum admission. —Jo Anne Triplett

Her first new album in seven years, first for her own label, sees Bonnie Raitt taking greater control of what has already been an incredible career. Slipstream is the result of locking her longtime touring band in the studio and seeing what happened; some songs get to breathe in ways that her earlier material never did. What makes the new record even more special is her time in Joe Henry’s home studio in California, working with his core musicians, playing covers and Henry originals. Here’s hoping we’ll see a “Deluxe Edition” of Slipstream soon that unveils the rest of their work together. In the meantime, I implore you to sit in a dark room and listen to her take on Henry and Loudon Wainwright III’s “You Can’t Fail Me Now” with someone you more than like. —Damien McPherson

While we just marked the one-year anniversary of Osama bin Laden’s death, as intelligent LEO readers, you know we don’t live in a movie. One villain’s extinction doesn’t lead to happily ever after. For the real story, come to this Kentucky Author Forum event. Journalists Ahmed Rashid and Clarissa Ward will discuss Pakistan post-bin Laden. Rashid wrote “Pakistan on the Brink” and will address ramifications of the U.S. exit from Afghanistan, as well as the Taliban. Ward, a CBS foreign correspondent, spent time embedded with Marines in Afghanistan. The Kentucky Center is hosting the event with the conversation starting at 6 p.m. The evening allots time for an audience Q&A, wine and cheese, a book sale, and a dinner. Ticket prices range depending on what you’d like to attend. —Anne Marshall

If you’re looking for a trippy fix but only have music, Shpongle is your gateway. The duo behind this madness consists of Raja Ram on flute and Simon Posford, better known as British electronic artist Hallucinogenic, who handles all synthesizers and programming. Together they create mind-bending kaleidoscopic tunes based in psychedelic trance, moving freely across natural, ambient soundscapes before detouring into Indian music, complete with throat singing over a melodious, wailing flute. This heady blend is a layered beast without the repetition of most techno. This is more like Aphex Twin if he reached for the drugged-out stars where Shpongle reside. With a reputation for being an immersive live experience, this should be a rave to rave about. Psychedelic artist Random Rab opens and is a good reason to come early and not miss the opening act. —Austin Weber

The plague of meth addiction has, unfortunately, become fertile ground for many a work of popular art. Louisvillian Andrew V. McNeill has had the chance to see the layers of criminality and the withering hopes in many parts of society — especially in his former role as policy adviser to the governor of Kentucky. McNeill has applied his insights to a debut novel entitled “Breckenridge County,” and he’ll be reading at Carmichael’s next Wednesday. His story focuses on a small town that a drug cartel wants to use as ground zero for its plans to spread far and fast. Standing in their way? Not much — but one deputy sheriff is about to take a stand. The author has shown that he’s walking the walk by promising a portion of the proceeds to local addiction treatment facility The Healing Place. —T.E. Lyons

I’ve always said Michelangelo’s “David” has the best butt in art history. Now we get to see it in person without having to travel to Florence, Italy. 21c Museum Hotel recently installed Serkan Ozkaya’s “David (inspired by Michelangelo)” on the corner of Seventh and Main streets. You won’t be able to miss it — it’s a nude man, 30 feet tall (twice as large as the original) and in gold! 21c Museum’s chief curator Alice Gray Stites says, “Ozkaya’s replicated work, made of fiberglass and spray-painted gold … addresses the issue of value, both economic and artistic. How do we assess the value of an artwork (or its double), in the marketplace, in the art-historical canon, in our own subjective experiences?” —Jo Anne Triplett