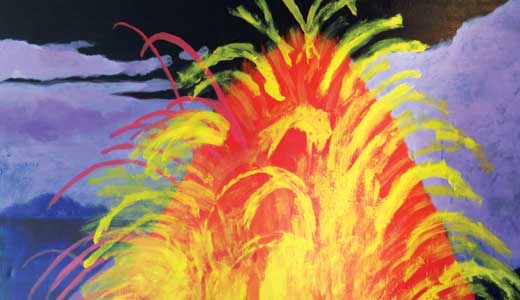 Sub Pop shoegazing poppers Memoryhouse are touring behind their new album, The Slideshow Effect, which showcases the Ontario-based band evolving from a bedroom project into a real, full-time band. The founders, Evan Abeele and Denise Nouvion, began working together as a multimedia experiment, pairing Abeele’s compositions with Nouvion’s visual art. They must have realized they were onto something, or at least figured out that, even today, there’s more money to be made in pop music than in Canadian art. The first paragraph of their bio mentions they’re from an area that hosts a festival that helped introduce Arcade Fire and Broken Social Scene … That’s sort of like me mentioning they sound kind of like Louisville band The Fervor, so you should go see them because The Fervor has played Z-bar before. —Peter Berkowitz

For fans of Louisville post-hardcore legends Coliseum, this is a notable show, as it’s their first without bassist Mike Pascal. “We’ve traveled the world together and had more great times than I can count,” band founder Ryan Patterson said in a statement/Facebook update. “While this is difficult at the moment, Mike’s departure from the band is the right thing for him, and I know we will all be better for it.” The night also features Tragedy, the crusty punks led by Todd Burdette and Paul Burdette, formerly of His Hero Is Gone. The band seems to hate publicity almost as much as they hate pop music, but they’re just humble. Todd told Portland’s Willamette Week, “We’ve never cared about hyping ourselves or promoting ourselves.” Sorry, guys. Shaved Women round out the bill. —Peter Berkowitz

Metal thrashing-mad fans, this is your seventh and last chance to check out this fest of heavy and wonderfully named bands, such as: Mangled Atrocity, Esoteric Burial, Cranial Impalement, Malignant Christ, Goremonger, Blood Coven, End It With a Shotgun, and, always, Coathanger Abortion. (Sadly, Intestinal Alien Reflux, Intracranial Butchery, Putrid Pile, and NunSlaughter have all had to drop off the bill due to low pre-sales for the weekend and rising gas prices.) If you’re full of pride for metal or just looking to get into somethin’ a little bit different this weekend, go out and pay tribute to these warriors, who are doing their part to keep Louisville weird. (It’s not as though you’ll have a chance to catch them on “The X-Factor” or “The Voice.”) —Peter Berkowitz

‘This is Not a Pipe Dream’

Seriously, this is not a pipe dream. Art is in action as the Alley Theater joins the Speed Art Museum to celebrate the life of Belgian artist Rene Magritte in the biographical play “This is Not a Pipe Dream.” Magritte’s work spanned styles from Impressionist to Surrealist, and his many oils represent his father’s contrary dismissal of his artistic visions as a “pipe dream.” Magritte’s only ally, his mother, committed suicide when he was 13, leaving him to fight for his artistic freedom. Magritte’s artistic realm survived the German invasion of Belgium in WWII when he embraced a painterly style. The show explores the many changes in styles, influences and genres Magritte conquered in an effort to bring his dreams to fruition. —Allison Ray

U of L’s Ekstrom Library

Ekstrom Library at U of L will be home to the sixth annual Kentucky Women’s Book Festival. Spalding University president Tori Murden McClure is speaker for the opening session, and then the day opens with women whose literary accomplishments are all over the map. The only fee is if you get the lunch ($16) at the session featuring novelist Mary Ann Taylor-Hall, who’ll speak on “A Very Odd Way To Spend a Life.” But it’s the entirety of the eclectic participants that will make this a day well spent — such as Nancy Jensen, author of the 2011 best-seller “The Sisters”; Lambda Literary Award-winner Julie Wade; and poet Kiki Petrosino. Then there’s LEO’s own Sara Havens, who’s been having a ball spreading the word on her first compilation of the adventures of Louisville’s Bar Belle. —T.E. Lyons

Flame Run Studio and Gallery is up and running in its new location in the Louisville Glassworks building. To celebrate, it’s having a grand opening that includes a multi-artist glass art demonstration. Twelve artists will all work on one sculpture from 4-7 p.m. During the last hour, they will be “sticking them all together,” says gallery manager Tiffany Ackerman. “A big part of Flame Run is the energy and the sharing and the fun we have here with each other,” she says. “Everyone who will participate in this demo has helped Flame Run. So this piece is going to be a symbol of that collaboration, our history and our future.” The exhibition “50th Anniversary of the Studio Glass Movement” is also on view; it runs through June 30. —Jo Anne Triplett

“A little charity and goodwill go a long way,” says Bronwen Harris, studio director of Creative Diversity. “All I want is for this to be successful, a little money made to help keep the ball rolling, and the artists to feel that their work is as important to the public as it is to them.” Art + food + helping others = recipe for success. Creative Diversity, an art studio for people with disabilities, is holding their Second Annual Pasta Bowl Fundraiser with food from City Café. “I just love the look on the artist’s face when asked to talk about their work,” Harris continues. “Our intentions (aside from raising funds) are to showcase the talents of the artists … and what new techniques they have picked up along their journey.” —Jo Anne Triplett

‘Gilda’s Night of a Thousand Laughs’

Some people just aren’t funny. But are you going to tell them that? I sure as hell am not. Especially if they’re sticking their necks out for a good cause. On Saturday, Actors Theatre hosts “Gilda’s Night of a Thousand Laughs,” which takes local celebrities, chefs and media personalities and throws them on stage in front of a mic for a shot at standup. Hopefully you’ll laugh with them and not at them — but that’s all part of the risk. This year’s show features comedians Tim Northern, Ted Mitzlaff and Brad Lanning, chef Dean Corbett, former Miss America Heather French Henry and many more. All proceeds go to Gilda’s Club, which offers help to families dealing with cancer through support groups, workshops, education and social activities. —Sara Havens

Have you checked out Kathy Griffin’s new talk show on Bravo (Thursdays, 10 p.m.)? It’s a highly entertaining weekly dose of celebrity trash talk by our favorite red-haired comedian (sorry, Conan). Chances are she’ll be working out new material for her show when she stops by the Horseshoe Casino Saturday night — from the Kardashians and the Housewives to Lindsay and Seacrest. And no doubt her mom Maggie — a regular on the show — will be a topic of discussion. Last time Kathy came to town, she said, “My mom is like the octogenarian Miley Cyrus before Miley got on the stripper pole. Remember when Miley was sweet and innocent and we didn’t know she was going to start stripping? That’s who my mom is right now.” —Sara Havens

The Louisville Independent Business Alliance makes no bones about the fact that it wants you to buy local. The Buy Local First Fair is just an official celebration of that desire, and you can do your civic duty Sunday at the Water Tower when more than 100 local businesses — including everything from musicians to artists, breweries to coffee shops, chefs to retail, and homegrown agriculture to … well, pretty much anything you can imagine — set up shop with their unique wares. There will also be live music from members of Vessel and Your News Vehicles, an “Iron Chef” competition, an arts and crafts market, a ValuMarket craft beer tent, plenty of food, probably lots of hipsters, and all manner of entertainment and fun. This event is all part of the mission of LIBA, Grasshoppers Distribution and the Louisville Visual Arts Association, which aim to support the local food movement. —Kevin Gibson

Make the Difference, a local suicide-prevention charity, is holding its third annual fundraising rally at the Irish Rover. There’s not a lot of net publicity on this event, so read carefully. Food, beer, a cake raffle, and a silent auction will be offered, with live music provided by The Rashers, The Juice Box Heroes, The Moon Dogs, and Shadwick Wilde of Quiet Hollers. Admission to this event is free, but donations are recommended and appreciated. All profits will go to the Kentucky chapter of the American Foundation for Suicide Prevention, whose motto is “Save Lives … Stop Suicide.” —Simon Isham

Just as Mellwood itself blossomed in the frame of the old Fischer Meat Packing Co., their newest exhibition illustrates just how well art and infrastructure cohabit. Austin, Texas, artist Chris Chappell understands this concept well, as his murals, which depict the reality of human life and the duality of joy and tragedy, can be seen throughout Louisville, notably in the lobby of the already-artsy Water Tower. This is the first-ever iteration of the hopefully annual metropolis-themed exhibit, which features artists from Louisville who are “with it” enough to showcase our scene, as well as some other hip cats from around the country. Mellwood’s own Crissa Candler hosted the opening on April 19 and is still the go-to for any exhibit-related inquiries. —Simon Isham