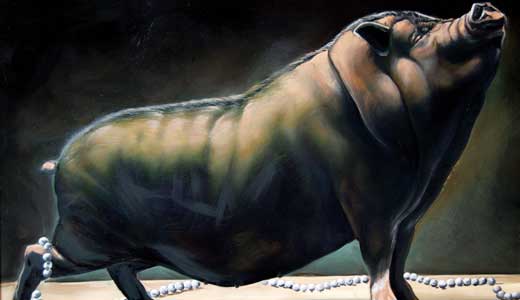 In the UK, new buzz bands are hyped every day, and lately, everyone wants to find the new Mumford & Sons. Though Dry the River can’t seem to find their way into a write-up that doesn’t compare them to the British bluegrass pretenders, DTR is much more clearly in the Arcade Fire/U2/Coldplay zone where everything is always big and orchestral and emotional all the time, and irony is saved for photo shoots. Their new album, Shallow Bed, sounds more like a late-’80s grunge title, but this ain’t Tad. In a brief but funny exchange, posted at bluecat.leoweekly.com, guitarist Matt Taylor answered my question about which one of them smelled best: “I do. Me or Jonny. We shower at least twice a day. Never together. Sometimes at the same time. Not together.” —Peter Berkowitz

This year, Abbey Road on the River, one of the world’s largest Beatles-inspired music festivals, will present … Jefferson Starship? Yes, that’s the band that apparently built this city on rock ’n’ roll back in the ’80s, under the name Starship. The reformed Jefferson Starship — featuring founding Jefferson Airplane member Paul Kantner and someone named Cathy Richardson filling in for the retired Grace Slick — will perform a show Saturday that features a blend of Beatles songs and its own hits, such as “White Rabbit” and “Somebody to Love.” Interesting. But as usual, there will be a ton of Beatles tribute acts from all over the world playing hit after hit, film screenings, Beatles karaoke, food, drink, merchandise and lots of family-oriented fun. It all happens Memorial Day weekend at the Belvedere. Don’t forget to wear your Jefferson Starship boots. —Kevin Gibson

You bust out “Take Me or Leave Me” at karaoke, you have headphones on at your desk but that thumping sound is your feet tap dancing, you may not be a Christian but you love “Jesus Christ Superstar,” and you have a plant you call Audrey II. Admit it, you’re a die-hard musical theater fan. The As Yet Unnamed Theater Company’s latest offering is a comedy within a musical about one who experiences a cast recording of a musical coming to life in his own living room. Written by Bob Martin and Don McKellar with music and lyrics by Lisa Lambert and Greg Morrison, the show grew from a spoof on old musicals they’d written for a party. —Jane Mattingly

“Desert Rose: An Arabic Showcase” is an evening of music performed by artists who have emigrated to Louisville from the Middle East. Some are also visual artists and have grown accustomed to traveling to cities with larger Middle Eastern populations, such as Chicago and Detroit, to perform and socialize. World music writer Alexander Campbell and Louisville Free Public Library (Iroquois Branch) immigrant services librarian Sophie Maier, both of whom have dedicated time and energy to helping such artists find a place in Louisville’s art and social world, teamed up to present this showcase. Mousa Alradwan (oud, drums), Mousa Al Taub (oud) and Mohammad Alabede (keyboards) are among the scheduled musicians, and DJs and belly dancers will join in the celebration. And we hear that traditional Middle Eastern drinks — both non-alcoholic and alcoholic — will be available. —Peter Berkowitz

Michael Franti has always impressed us as a fun yet serious artist. This San Francisco poet, filmmaker and children’s author most famously functions as a peace-loving musician who travels the world promoting social justice and performing shoeless. Since his emergence as a festival favorite in the early 1990s, Franti’s recorded work has ranged from the mellow ganja-flavored tracks on Front Porch Songs to the catchy, if angry, anthems that comprise his classic anti-war album, Yell Fire. But of late, Franti has been delivering less controversial, more radio-friendly (well, WFPK-friendly, at least) releases like All Rebel Rockers and The Sound of Sunshine. He returns to town Saturday with his rock-reggae-rap ensemble, Spearhead, for an intimate performance. If you have a conscience and you like to dance, this is one show that ought not to be missed. Nic Cowen opens. —Kevin M. Wilson

Oh my goodness, look at how adorable that alpaca is! If you’re like me and say that often, this is your weekend. Free — let me reiterate that, this is a free weekend of alpacas in Louisville. Why? Why not? OK, technically this is the national show of the Alpaca Owners and Breeders Association of Nashville. The AOBA “serves to facilitate the expansion of a strong and sustainable alpaca industry through the growth and development of the national herd and its products.” So, I guess we’re not eating them anytime soon? Just kidding! Everyone who’s anyone in the alpaca world will be there, and don’t forget to bring cameras. We’re told you can “talk to hundreds of breeders and meet over 1,000 alpacas face-to-face, all under one roof.” Talk about meeting cute! —Peter Berkowitz

This Memorial Day weekend, Chez Moi will offer race fans a chance to turn their winnings into something pretty to hang over the mantle. In addition to original works of art, the gallery will bring an ambitious, multimedia lineup to the track, featuring a “festive mix” of performing arts, film, hands-on children’s activities, and live bluegrass, blues and roots music. More than 500 artists’ booths and 15-20 larger gallery tents will fill the Infield, all while normal racing activities take place. Access to “The Experience” is included with general admission. The three-day festival also aims to raise awareness for charities like Home of the Innocents, Habitat for Humanity, AIDS Services Center Coalition/AIDS Walk, Fairness Campaign and the Churchill Downs Inc. Foundation. —J. Christian Walsh

WFPK has arranged a great lineup of soulful artists for your listening pleasure next Wednesday. First up at 6 p.m. is Vessel, a folksy group of highly sought-after solo musicians who have banded together to integrate their best ideas into a lively, danceable performance. Next is Joseph Arthur, the shining star of the event, who will begin his show at 7:30 p.m. The Akron, Ohio-born, Brooklyn-dwelling singer/songwriter creates textured and rich sonic layers, mixing them while onstage with a complicated array of switches and foot pedals — truly a sight to behold. The night will take a turn at 9 p.m. with a roots-rock twist on traditional Celtic music played by Kansas City band The Elders. As always, B.Y.O.B. is prohibited. —Simon Isham

The Figurative Collective is a group of artists who meet to draw, as their title suggests, the human figure. Two of the artists, PONDELL (Corrine Holt) and n d hazlett (Deborah Hazlett), are displaying some of their work from the studio sessions. Besides working in the same location, they are also bound by the emotions their works express. “The way I figure it,” hazlett says, “being an artist is a way of experiencing, then creating, then sharing. All these experiences have brought me pleasure, and I try to let others see what I see, feel just a bit of what I feel.” PONDELL agrees, saying, “It is important to be able to render a pose with correct proportion, but also be able to bring a certain feeling or mood into the pose.” —Jo Anne Triplett

Prior to the feminist art movement of the 1970s, it was hard to find images of pregnancy other than those featuring the Virgin Mary. It’s fair game now, and many express their personal journey through art. One such artist is Jennifer Romita; she’s taken pregnancy back to its beginning — fertility. “I had never given fertility much thought outside of the family planning aisle at the local pharmacy,” says Romita. “So when I lost my first pregnancy to early miscarriage … and failed to conceive in the many difficult months that followed, I began to suspect infertility. My doctor discovered my second pregnancy during a routine appointment only a short time later. To say it was unexpected would be understating my shock, and I was sorely unprepared for the identity crisis that followed.” —Jo Anne Triplett