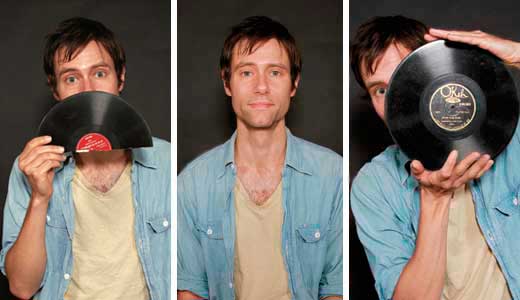 For the folks at home

“We’ve been walking over to a group of boys who seem to be taking their duties pretty lightly at the moment.” The renowned sportscaster Ted Husing is in Louisville to cover the 65th running of the Kentucky Derby for CBS radio. It’s 1939, three days before the race, and he’s on the backside of Churchill Downs. The “boys” aren’t; they’re black stablehands in the employ of two barns with horses scheduled to run on Saturday. They’re also musicians in two separate bands that, on Husing’s urging, proceed to “whip up a little bit of jive stomp” for the listeners. Their 10-minute broadcast, captured by WHAS engineers on a single 16” transcription disc, is an utterly unique, important and affecting document of Louisville musical and social history.

This music was hardly “jive stomp,” and Husing’s use of that term (made famous by Duke Ellington’s 1933 hit of the same name) is about the only evidence that what you’re hearing was recorded in the ’30s. The heyday of ragtime minstrelsy was many years over, and popular taste was deeply in thrall to swing. But it’s not hard to imagine that the audiences for whom the Barnyard Boys might have been used to playing — affluent whites on race days — could well prefer the hoary echoes of Dear Old Dixie to any contemporary swing-and-sway or jump-and-jive.

“Stand up, boys,” Husing orders. “You look lazy in the sunshine.” The members of the Six Bits of Rhythm might seem a bit more modern-minded with their takes on two Louis Armstrong records, “Old Man Mose” (1935) and “Shoe Shine Boy” (1936), but their instrumentation astounds. CBS’s man, for the benefit of the radio audience, ticks it off: guitars, kazoos, glasses, a jug, a cymbal, frying pans, and tin cans; instruments better suited to the turn-of-the-century “spasm bands” — typically kids making rackets on cigar-box guitars and homemade saxophones — than to any swing orchestra. Husing is especially impressed with the jug. It’s clear he’s never seen one played before, and he asks to hear it unaccompanied. “Ah, that’s swell,” he delights, as the blower vamps. “Isn’t that grand?” Many Louisvillians, of course, knew this already. The Six Bits could claim a legacy going back at least to 1903, when Earl McDonald’s pioneering jug band made its first appearance at the Derby.

Husing needs to wrap. He asks the Barnyard Boys for another piece, and, with a great rendition of “Dinah,” the massive 1932 Bing Crosby and the Mills Brothers hit, they show they’re not purely antiquarian. But the tune ends and Husing addresses his listeners: “We’re just trying to give you an idea — down here everything is happy moments, glad sunshine …” Sure, and “in de ebening, by de moonlight …”

The segment wouldn’t be complete without predictions. One of the Barnyard Boys has his eye on Technician; the Six Bits’ jug-man wants El Chico. Both were accomplished thoroughbreds, but neither placed that Saturday or ran in the Preakness or Belmont; except for their bloodlines, they’ve been forgotten. The stablehands, ultimately, were luckier. Berea College’s Hutchins Library acquired their transcription disc from WHAS in the late ’90s. The Clear Channel-owned station — responsible, in 1925, for the first live Derby broadcast — no longer had a use for it. It has since been digitized, and is available for posterity through the library’s online Sound Archive.

Nathan Salsburg is an archivist and producer for the Alan Lomax Archive, curator of the Twos & Fews label, and a guitarist.