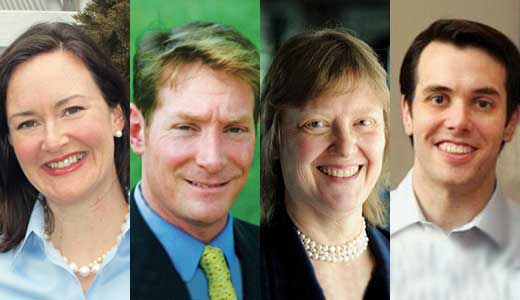 Perhaps the most competitive and important race on the ballot Tuesday in Louisville is the Democratic primary for the state Senate’s 19th District. With no Republican opponent this fall, the winner of this race will take over the seat of retiring Sen. Tim Shaughnessy for the next four years.

The race features Sarah Lynn Cunningham — an environmental engineer and activist, endorsed by the Sierra Club, Kentuckians for the Commonwealth’s New Power PAC, Rep. Jim Wayne and Councilwoman Tina Ward-Pugh; Morgan McGarvey — a young lawyer with the backing of big-name Democrats such as Jack Conway, Crit Luallen and Shaughnessy, as well as a handful of labor unions; Amy Shoemaker — another young lawyer with the endorsement of the Louisville Fairness Campaign’s PAC; and Gary Demling — a local golf instructor.

LEO Weekly conducted separate phone interviews with all four candidates on a wide range of issues. Their answers follow in the order in which they responded to our interview requests.

With the conservative makeup of the state Senate, what is the most realistic legislation you would like to see passed in the first one to two years of your term?

Shoemaker: One of the things that I’d really love to see is the bullying bill come back on for a hearing and make it out of committee. That was one of the pieces of legislation that really broke my heart and compelled me to push ahead in this state Senate race. The sexual orientation of high school and middle school students should not be a basis in which they can be bullied or taunted, and that should not be condoned by the adults around them.

Cunningham: If we’re going to continue to have the big boys at loggerheads, trapping everybody else’s effectiveness, that list of potential things could get much shorter. But I would say if it is anything, it would be something that would increase the efficiency by which state government uses energy, because conservatives like to lower government’s costs of operating and liberals like to reduce government’s carbon footprint. That’s the most likely place where I might be able to encourage some consensus and we can do something that makes everyone happy.

McGarvey: I actually think that we can get a gaming bill through the legislature. I think that we can get the 23 votes that are there. We saw this past session that Damon Thayer, a Republican, actually introduced the bill. I think we need to work on building a broader-based coalition, make sure that our university presidents, our chambers of commerce, some of our business interests, are on board. And probably do a better job at the front making sure that the entire horse industry is united around the bill, and that we do a better job of explaining where the revenue from gaming is going to go.

Demling: (An issue) I’d really like to see passed is the gaming bill. I think that more than likely, the Republicans will come together and realize that Cincinnati’s getting ready to build the biggest boat in the United States, and Indiana already has theirs, and our tax dollars continue to go across our bridges to other states to pay for their resources.

If you could fix one thing about the leadership of the Democratic Party in Kentucky, what would it be?

Shoemaker: I wish they wouldn’t involve themselves so heavily in a Democratic primary in a district that is overwhelmingly Democratic. That was a very surprising turn of events in this particular race, because there’s no Republican running. This is a beautiful situation for them, yet at the same time, not explicitly but rather implicitly, they definitely endorsed a particular candidate (McGarvey), and I don’t know that that candidate was the best candidate for Kentucky moving forward. So I’d like to see less insularity and less politics as usual, and more progressive openness to new ideas and new people.

McGarvey: I think the thing I want to see is more leadership. Democrats have good ideas on how to create jobs, on how to grow revenue, on how to improve education. But I don’t feel like we are doing a good enough job of concisely saying and articulating those plans with conviction, and standing up for what we believe in.

Demling: I think we need more transparency and more accountability. There’s such a disconnect between people in Jefferson County with those who represent them in Frankfort. A lot of people honestly don’t know who their state senator is, or who their state representative is. I think there needs to be a better connection there.

Do you consider yourself a “Friend of Coal”?

Cunningham: No. That’s an easy question. However, I must emphasize that I am a friend of coal workers. There’s a big difference.

McGarvey: I recognize that right now we receive 92 percent of our power from coal in Kentucky. But I also believe that we need to do a better job of moving toward a more energy-efficient economy. And I think the way we do that is to promote energy efficiencies in homes and businesses, so we’re using less power, less coal, and using it more efficiently.

Demling: On mountaintop removal, I do not like the way they are polluting our streams and endangering our valleys. Being someone who works around grass a lot at golf courses, I understand what that kind of run off can do. As long as OSHA and EPA laws are administered correctly and everything is safe, we can still create jobs that way. So yes, I’m a friend of coal, but I think we need to go revisit underground mining.

Do you think humans are causing climate change, and do you think this is a threat to the survival of the planet?

Cunningham: I would say it’s the result of industrialization, and it’s the gravest threat to the planet and those who inhabit it.

McGarvey: I think that we need to do everything that we can to limit our carbon footprint in a responsible way.

Demling: I think that with technology nowadays, and with people becoming more reliant on more technologies, it has affected the ozone layer. Now, I’m not an environmental specialist, but I do believe that it’s a cause in both areas: man-made, as well as just the way the planet is growing older and older.

Do you support Rep. Jim Wayne’s tax reform plan that he introduces every year?

Shoemaker: I do. Whether or not it can be realistically passed through both houses is questionable. But I support the premise on which it is based, the progressivity of its ideas, and would really love to see us move in that direction.

Cunningham: Yes. It is the most important bill that has failed in recent years.

McGarvey: There are a lot of really good things about Jim Wayne’s bill, and yes, without knowing all of the specifics of that bill, I do respect it. And he recognizes some of the key principles that we need to have in any tax reform situation. The tax cannot be regressive, and we need to recognize we’re in a more service-based economy.

Demling: In tax reform, everybody wants to get something in return. I support that bill, but I think we can add a little to it. I think service taxes should apply to attorneys and CPAs, and we could create some revenue as well.

The Ark Park: Good or bad for Kentucky?

Cunningham: I think it’s bad for Kentucky, but I also think with the way the economic development law was written, they didn’t have a choice but to subsidize it. I think that’s a problem with the law, but I don’t think it helps Kentucky to reinforce our image as being a bunch of poorly educated hicks.

McGarvey: I think the Ark Park gives Kentucky a bad image, considering there were other states that had already turned it down before we accepted it. But I understand the governor’s emphasis on creating an economic impact by getting more jobs and tourism dollars to an area that needs them.

Demling: I’m sorry to say that I haven’t (been there yet), I really should go visit that. Actually, it’s one of my plans for this year, and a few other places. Currently, I just don’t see it as being beneficial as of yet. But I still think that we maybe need more promotions and marketing for it.

For more from the candidates and additional primary coverage, visit fatlip.leoweekly.com.