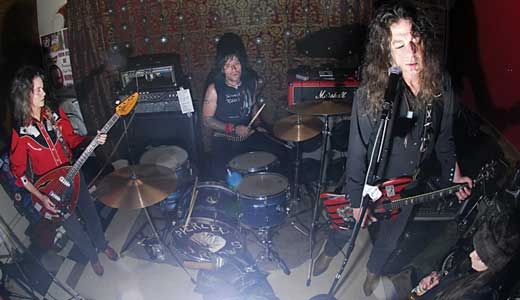 At the age of 63, most rock musicians are expected to be retired, dead or continuing to desperately hit every state fair possible to bleed pennies out of those two hits from 1966. Most people aren’t Toody and Fred Cole.

The happily-ever-after couple are best known — to the very small group who know them at all — as the duo behind Dead Moon, a band from rural Oregon who lasted for 20 years and was the subject of a full-length documentary film in 2006 called “Unknown Passage.” While even most rock fans with some intact social skills can be forgiven for not being aware of Dead Moon, or the Coles’ latest band, Pierced Arrows, Pearl Jam are fans and have performed some of their songs. A Dead Moon song can be heard in the video game “EA Skate 3,” and Vice Records released the latest Pierced Arrows album, Descending Shadows. Their din of psychedelic garage rock might scare the average Pearl Jam fan, or inspire them.

Guitarist Fred Cole has been performing since his teens, scoring a minor hit with a group in the mid-’60s, in fact. He and Toody ran a music instrument shop and made their own records for many years, living simply out in the country with their three kids in what she refers to as “a creepy old place” when they weren’t touring Europe repeatedly, where they built a following they couldn’t locate in the United States. “We’ve got way too much shit to ever move again!” she exclaims.

Today Toody, the bassist, continues to work on many of the tour details, booking vehicles and hotels and maintaining their website and correspondence. Having never played Louisville before, Toody included Possibility City on her wish list when looking at routing for their current tour. “It’s always really exciting to hit a new town,” she notes, citing “the people, the club, the vibe of the thing” as what they seek out on the road.

“In the Dead Moon era, we were amazingly popular in Europe, we did extremely well. Now with Pierced Arrows, over the past five years, Europe doesn’t have the incredible turnouts that they use to. We’re playing smaller clubs, so it’s not too much different, at this point, from touring in the U.S. — except that it’s to see all the people we’ve grown with over the past 25 years, that’s still incredibly cool.”

Drummer Kelly Halliburton, whose father played in a band with Fred in the early ’70s, came back into the Coles’ lives shortly after Dead Moon broke up and kept them from retirement. Not that they needed much encouragement.

“I think that self-motivation, self-drive, is something you’re just born with,” says Toody. “As far as doing something for this long, loving it enough to go through the pain for the hour of fun and glory.”

The Coles have literally done it themselves for years, homesteading, building their store by hand, and hand-manufacturing each of their early records. “There’s a great sense of accomplishment to dabble with enough different things to where you know how to do a little bit of everything. When we first started doing it, it was an economic necessity, there was just no other way around it. Fred happens to be one of these renaissance kind of guys who loves learning how to do everything.”

The years are catching up, slowly but surely, for the grandparents (their oldest grandkid is already in college). “You get to the point where going up and down stairs, lifting heavy equipment, carrying gear and stuff, gets to be real old. But that was always a stress before. It bothers Fred more than it does me. We’re pretty lucky — Kelly’s a big strong kid, so he takes care of the big stuff, I take care of all the small stuff, and Fred takes care of 90 percent of the driving … We each have our own roles.”

“Probably about 50,” Toody replies with a hearty smoker’s laugh.

with Don’t and Old Baby