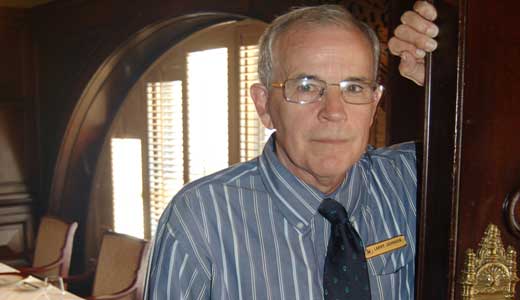 Sometimes in Louisville, we tend to fasten that Bible Belt a little too tightly, which makes us bulge with conservatism and forget our past as a debaucherous river city. Perhaps we’ve matured and left that life of reckless abandon behind — but we should never forget it. Thankfully, people like Larry Johnson, a concierge at the Seelbach Hilton, is around to remind us of our city’s exciting history. Booze, gambling and hookers have always rested comfortably in Louisville’s closet — and used to come out and play a lot more often than just the first weekend in May.

Johnson has worked at the Seelbach for more than 30 years and is the man to see if you’re looking for stories. He started as a bellhop and now adds “historian” to his title. He knows the Seelbach like the back of his poker hand — the secret tunnels Al Capone allegedly escaped through, the hidden doors and picture frames of a hotel speakeasy, and the very room F. Scott Fitzgerald referenced in “The Great Gatsby.”

Johnson wrote “The Seelbach: A Centennial Salute to Louisville’s Grand Hotel” in 2005 and has since updated it. Here he lays out all the facts and sordid history of the hotel, which was built in 1905 by brothers Louis and Otto Seelbach. The list of people who have stayed at the hotel is almost as extensive as the guest list at Liza’s last wedding — presidents Taft, Wilson, Roosevelt, Truman, Kennedy, Johnson, Carter and Clinton; and celebs Elvis, Muhammad Ali, Carol Channing, Al Pacino, Miss Piggy (random), Whitney Houston, and lots more. And for Gen X-ers, the Seelbach was where New Kid Donnie Wahlberg set the hallway on fire with a bottle of vodka. Street cred!

Johnson was kind enough to take me on a tour through the hotel, showing me every last detail and sneaking me into the basement to check out the secret tunnels that led to Louisville’s underground (and are now boarded off). I was able to jot down only a fourth of what he said — these walls can talk, and Johnson is clearly the Seelbach’s medium.

The storied Oakroom was our first stop. Kentucky’s only AAA five-diamond restaurant, the Oakroom once served as a gentlemen’s billiard hall and cigar room. In fact, you can still see the original cue racks on the south wall. Paneled in dark, hand-carved American oak and garnished with fancy chandeliers, the room was originally off-limits to women when it was added in 1907. This is where the Al Capone room is located, which is now a private dining room you can reserve for a larger party. Legend has it that Capone played poker and smoked cigars here, and if the feds got word he was in town, a small panel in the back wall made for a quick getaway — into a tunnel system underneath the city.

Next up was The Rathskeller, which is, without a doubt, the coolest room in all of Louisville. Now rented for wedding parties and high school proms, the room has served many purposes since 1907 — from a theater to a jazz club. Modeled after a German social hall, The Rathskeller is the only surviving complete Rookwood pottery room in the world. The ceilings by the back bar are made of leather and feature the 12 signs of the zodiac. And statues of pelicans are carved into the columns throughout the room — supposedly a sign of good luck. It’s here where F. Scott Fitzgerald hung out while he was passing through town in 1918, which inspired him to use the hotel as the scene of Tom and Daisy Buchanan’s wedding in “The Great Gatsby.”

Johnson completed the tour with a few ghost stories — the most famous one about the Lady in Blue who haunts the elevator shafts of the hotel. After several employees reported seeing the same mysterious woman in the elevator, some research turned up a story on a woman, in a blue dress, who plunged to her death in the No. 3 elevator shaft after finding out her husband was killed on his way to meet her.

Asked what Johnson likes most about his job after 30 years, he replied, “It’s being around people. I love to talk, as my wife would tell you. And my job lets me do just that.” Next time you’re looking for a lunch spot or heading to happy hour at Fourth Street Live, stop in at the Seelbach and take a look around. Ask for Larry. He’ll gladly tell you how the Grand Hotel is feeling that day.

The Big Chill: LEO searches for the coldest beer in town

From Garden-to-Glass: The quest for Louisville’s most local cocktail