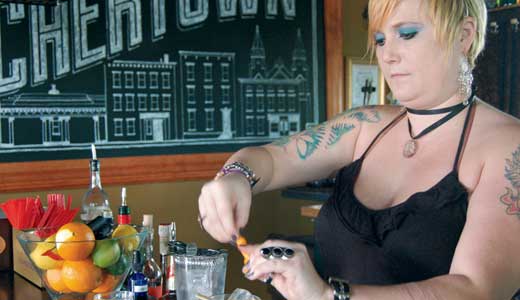 Bourbon is America’s champagne, and given its increasing global popularity, we should allow ourselves a little Napa Valley-level of horn tooting from time to time. So, to help get the barrel rolling, LEO invited some of the city’s most talented bartenders to create a “100-mile cocktail,” celebrating Kentucky whiskey and close-to-home products and produce.

The goal was to recognize one of them as the best-tasting, lowest-mileage concoction. However, the entries were all so different and — hiccup — amazing that we decided to stop counting food miles and just tell you about each of them.

It’s true: Fancy cocktails can take a hot minute to prepare. But why moan about it when there’s a show to enjoy? “The Shake” is usually the most entertaining part of the process — not to mention critical to the blend and mouth-feel of your beverage. A shake is like a bartender’s signature and can range from graceful and fluid to locomotive-like, complete with funky drummer facial expression.

Kyle Higgins’ attention-grabbing Pure Kentucky Sour benefits from not one, but two distinct takes on this practice. Traditional sours are made with an egg white that is first shaken into a whipped creamy meringue. Higgins adds the strong (107 proof) Pure Kentucky Bourbon, preferring a whiskey that stands up to the other elements in the drink — namely, Kentucky Colonel Mint from the backyard and Kilimanjaro’s Sunrise Ginger Syrup, a “KY Proud” product.

The result is a tantalizing, snow-white blend that’s served in a frozen coupe glass. For garnish, Higgins adds decorative filigree to the frothy head with Angostura Bitters, creating what resembles a chilly, inverted latte. If you’ve never had a traditional sour for fear of the raw egg, you’re cheating yourself. Not only are sours safe, they’re among the more elevated bar experiences one can have.

The first strawberries of the season jour-neyed a short hop north from Van Meter Family Farms in Clarkson, Ky., before (the aptly named) Jason Cobler muddled them with Harvest’s own sidewalk mint. Cobler adds a couple dashes of strawberry-sassafras bitters by Brian Dawahare, a Louisville accountant and moonlighting bitters distiller. The drink is set off with Buffalo Trace Bourbon and sweetened with Owensboro sorghum.

There were actually two entries that take advantage of Creation Gardens’ small strawberry shipment, and Cobler’s Back Forty really delivers on the fruit’s essence — imagine a strained, less viscous fruit shake with a touch of sin. The flecks of mint also pop, as does the alcohol, which is present without being overpowering. The Back Forty is seasonal, easy drinking and served straight up in a chilled martini glass: about what you’d expect from Harvest, Louisville’s elegant, farm-to-table star.

The Honeysuckle and The Café Racer

Doug Petry — the rookie in our group of five — turned in two solid entries, including the second of our strawberry cocktails. It’s interesting how drinks using similar components can turn out so differently. The Honeysuckle shows fine balance with the alcohol and sugars vanishing into one another. It’s less “berry forward” than the previous selection and cleaner tasting, designed for sipping on Rye’s patio during spring and summer months.

Petry also muddles Van Meter strawberries with mint, using leaves “that were in the ground 20 minutes ago” (from Ronald Farms, a nearby, mom-and-pop operation). Petry’s active ingredient is Bulleit Rye, sweetened with honey from Rye’s own beehive. The offering is served in an old fashioned glass and garnished with a honeysuckle bloom, picked from the bartender’s front yard before work.

The house’s zero-mile honey syrup helps offset the coffee used in The Café Racer (which gets a point, too, for being locally roasted at Sunergos). The sweetened coffee plays quite nicely with its Bulleit Bourbon partner. This smooth and creamy number is served on the rocks with fresh mint and has a definite dessert vibe — or breakfast vibe, depending on how you roll.

The ironically titled Rambling Man from this BF/GF tandem is actually quite down-home. Susie Hoyt and Larry Rice’s riff on the old fashioned is built from all things local, like a honey syrup made from Kentucky Straight Honey (out of Simpsonville, Ky.) and sassafras bitters that were — like many of the ingredients on display at this Frankfort Avenue honky-tonk — crafted in-house. The Rambling Man has a subtle, root beer flavor with floral notes that Rice says comes from the fresh honey. “You don’t get that with the processed stuff,” he adds.

Hoyt stirred these together with Charter 101 Bourbon and a dash or two of Peychaud’s Bitters, both produced by Buffalo Trace in Frankfort. Fresh takes on classic creations is where The Silver Dollar excels, and their Rambling Man fits this bill. The sassafras bitters are the star here, which, fresh out of the jar, wafted of edible potpourri and woodsy touches of clove. Rice is currently macerating orange, lemon and habanero bitters, which he says is the fun, “meditative” part of his job.

The 2-Counties Old Fashioned and Over Yonder Sazarac

“We’ve been called chemists before,” says Reina Shannon, as she sparks her lighter under a shaving of orange zest. The technique gives just the right kiss of citrus to the otherwise local Sazarac she’s preparing. The Bulleit Rye-based drink is sweetened with honey syrup made from a neighbor’s hive in Pewee Valley, which also appears in Jared Schubert’s recipe for the 2 Counties Old Fashion.

Schubert is another pre-Prohibition throwback who has spent a career perfecting, then trying to improve on, the cocktail’s illustrious past. What’s notable about both the 2-Counties and Over Yonder is how well suited they are for this marvelously decorated, second-floor time capsule in Butchertown. Meat has a mysterious, hideout kind of vibe that can be appealingly creepy (the glassed-in meat locker that greats you on your way in looks like a Damien Hirst creation). Both of these classic cocktails make an almost artistic connection to this environment, transporting its recipient to an era that vanished long ago.

These walls can talk: Seelbach historian spills hotel’s many secrets

The Big Chill: LEO searches for the coldest beer in town