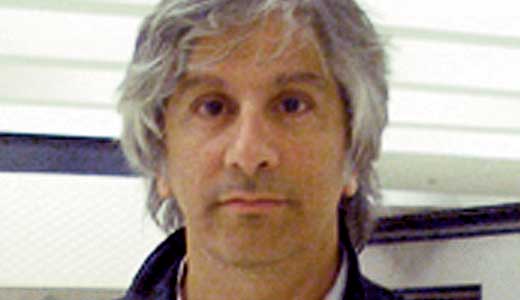 For 30 years, Lee Ranaldo was one of the two guitar heroes of the ultimate guitar/noise/cool band Sonic Youth. While he sang some songs, Ranaldo was perceived as being more of a worker and less of a centerpiece than guitarist Thurston Moore and bassist Kim Gordon, who sang more and stood out for their long, seemingly ideal marriage.

The couple announced their separation last fall, and the future of the band was put on hiatus. Ranaldo, now 56 and a tireless collaborator who has already released eight solo albums of experimental music, had been working with Sonic Youth drummer Steve Shelley and others on his first solo “song record,” as he calls it. The result, Between the Times and the Tides, was released in March, and Ranaldo and band come to Louisville in between dates opening for M. Ward.

Lee Ranaldo: I have a lot of friends who live in Louisville, and I’ve loved a lot of different music that’s come out of Louisville over the years. To me, it’s a really cool town, it’s a music town, and I really like hanging out there. There’s definitely local musicians I really like a lot, that I play with a fair amount, so I’m definitely psyched to come.

Some of his local friends include percussionist Tim Barnes, who often played with Ranaldo when he lived in New York, and singer-songwriter Will Oldham. Also, “There’s this poet/writer guy named Ron Whitehead down there that I’ve been longtime friends with.

“Louisville’s one of those places where it’s a small town but had a big impact on a lot of people,” says Ranaldo. “There’s been a lot of great music coming out of there.”

LEO: As a fan for two decades, this is the solo record I’ve been wanting you to put out.

LR: Oh, cool! Well, it’s definitely the record I’ve been wanting me to put out, as well. I’m super happy that it finally happened. It happened at the point when I least expected it. I’ve tried to make a solo record in the past, force it into being; either I’d get distracted by Sonic Youth going on tour, or going in the studio or whatever, it never happened. I’d always written songs like this — most of them are on cassettes in drawers. But this time, it snuck up on me at a time when I was preoccupied by a bunch of other stuff. It happened in a really natural way, which I think adds to how nice it sounds.

LEO: Did you feel that your time to do this was running out, after 30 years with a band?

LR: No, it didn’t feel that way at the time of making this record. But if you’d asked me four or five years ago, I probably would have said, “Yeah, if I don’t make a solo record soon, it’s never gonna happen.”

LR: It was weird. Especially with the timing — it was mostly complete when it was revealed, all this stuff internally with Sonic Youth … I don’t think I could have made this record knowing that the band was gonna stop, for a while at the very least, or whatever. I made it in our downtime, oblivious to all that stuff that was going on … My band played our first gig the day after Thurston and Kim announced their split.

LR: No, not really. If anything, I just felt sorry to see them going through this kind of pain.

LEO: I’ve thought before that if Sonic Youth had broken up around 1997, there would be millions of dollars waiting for you to reunite.

LR: Maybe. That wasn’t the important issue for us. We used to joke, “Yeah, we should break up and then come back six or seven years later, do a reunion tour, and make a lot of money,” but it wasn’t really ever the object of it for us. It’s been a lot of fun to do a small tour like this. It’s a lot of work to put it together; we’ve been spoiled in Sonic Youth by how faithful and devoted our crew’s been. It’s really, on a lot of levels, like starting from scratch … if I didn’t feel like the music was worth it, I wouldn’t be doing it.