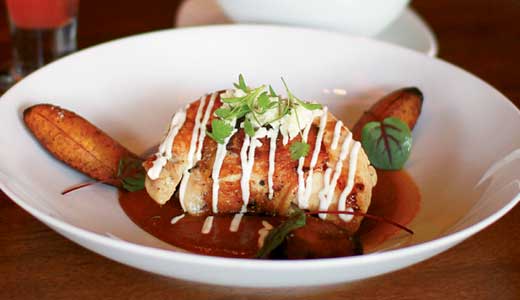 Some guacamole walked into a bar, and the bartender said, “Hey! There’s a restaurant named after you.”

“What? There’s a restaurant named Wilbur?”

Well, no. And my career as a comedian should probably end right there. After all, guacamole is no joke. And if you think guacamole is just some boring green stuff that you use as a dip at cheap Mexican restaurants, you might want to rethink that, too.

At Guaca Mole, one of the hottest new eateries in the East End, this avocado dish is about as good as it gets, in Louisville or even in Mexico. And that’s only the half of it: The name Guaca Mole is split in two to celebrate both “guac” and the equally iconic “mole,” the luscious dark unsweetened chocolate sauce that was also bequeathed to us by the ancient Aztecs.

Guaca Mole presents stunning examples of both dishes, and much more, too. The restaurant is a bright and boldly colored remake of a former Applebee’s and Shoney’s. Its new incarnation comes to us from Fernando and Cristina Martinez — partners in the original Havana Rumba and Mojito restaurants — and Fernando’s cousin, Yaniel Martinez, who was chef at the Middletown Havana Rumba.

The Martinezes, who boast Cuban heritage, created instant culinary landmarks with both those Cuban-style restaurants before they left town a few years ago, first to a resort in Venezuela, then to the Miami region. Now they’re back home in Louisville and applying their winning style to what might be called Nuevo Mexican cuisine with a Fernandez flair.

Let’s avoid getting into a fruitless debate about authenticity. I will simply testify that the fare at Guaca Mole has been consistently delicious; and it reminds me, more than a little, of the famous Topolobampo in Chicago, the higher-end eatery of top chef Rick Bayless, an Anglo cook and food television personality who can turn one hell of a Mexican regional dish.

The setting is mighty fine, too. The color scheme is fun and bright, with simple decor featuring authentic Mexican dolls and pottery. The restaurant seats 150 — a happy legacy from its corporate chain predecessors — with a large, comfortable rectangular bar at the center of the action.

The dinner menu features nearly three dozen dishes, segueing seamlessly from soups, salads and botanas (small plates) through sopes and guacamoles to ceviches, moles, tacos and specialties. Apps start as affordably as $5 (for soups) and $7 (for several small plates), and top out at a still very reasonable $16 (for the lamb-shank coloradito mole). The drinks list includes a short but reasonable wine selection of about two dozen bottles, mostly in the teens and $20s, starting at $4 for a glass, a short bill of mostly Mexican beers, and an intriguing set of Latino-style cocktails. Something called The Swirl ($7.25), a mix of sangria and a margarita swirled into a colorful whirl in a tall glass, was popular with our group, and the mango mojito ($8) also won applause.

Since Guaca Mole is the name of the place, we couldn’t resist trying some guac and some mole to start our meal. The guacamole sampler ($13) features small bowls of all three versions — traditional, Yucateco style with grilled corn and fried plantains, and con chicharrón with sliced radishes and pork rinds — and all went fast, helped down the hatch with excellent tortilla chips, fresh and warm and crisp. Another app, papas enmoladas ($4), consisted of crisp, sizzling fries topped with a slightly sweet dark-choco mole sauce and stripes of sour-cream-like crema.

A friendly warning is appropriate here: The guacamoles are off the charts, and so were the papas. The chips and salsa ($1.99) will also satisfy. So beware the Mexican Restaurant Effect, in which one gets so full before the main courses arrive that there’s no room left for dinner.

We fought that effect and kept piling more great dishes on the table. The Mole Poblano ($13) consisted of a tender, juicy half of a pan-roasted chicken on a bed of succulent dark mole sauce, striped with crema and garnished with red-veined lettuce leaves and plantains.

The tamales vegetarianos may be the most “meaty” vegetable-based dish in town. A deeply flavored masa corn-meal roll was wrapped in a corn husk and stuffed with a symphonic flavor and texture mix of wild mushrooms, corn kernels, tiny roasted tomatoes, cotija cheese and huitlacoche, the “corn smut” Mexican treat that Mayan Cafe made famous. Don’t knock it if you haven’t tried it. And do try it. You will not be sorry.

Our share of dinner was about $65, including a couple of oversize glasses of draft Dos Equis. Outstanding service earned a 20 percent-plus tip, and the abundant portions provided for a bag of leftovers to take home.