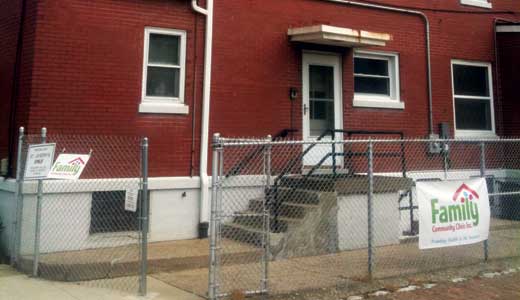 Shortly after 8 a.m. on Saturday morning, two people file into the rectory behind St. Joseph Catholic Church in Butchertown. In search of free primary medical care, they head downstairs, where the Family Community Clinic has set up shop.

The nonprofit medical clinic relies on church funding, donations and grants to serve just a small fraction of the estimated 14 percent of Louisvillians without health insurance.

The brainchild of the Rev. David Sanchez and St. Joseph parishioners, Family Community Clinic opened in January 2011 and is staffed solely with volunteer doctors, nurses and assistants. On most Saturday mornings from 8 a.m. to noon, they open their doors and give primary care to anyone — first come, first served.

While they do not have the resources to provide emergency care or treat chronic conditions, they can provide basic lab tests and physicals, and treat acute illnesses such as colds, flu, strep throat, respiratory aliments, allergies or rashes — with no money taken, and no questions about legal immigration status asked.

On this particular Saturday, six of the nine patients treated are immigrants, with five of those needing the services of language interpreter Joshua Tweddell, a regular volunteer at the clinic over the past year.

Tweddell says the clinic is often the only option for many uninsured immigrants outside of an emergency room. Here, they do not have to worry about confidentiality, safety or cost.

“Every single person that comes in is extremely grateful,” Tweddell says. “A lot of times afterwards, people will say, ‘How much do I owe you?’ No, it’s free.”

Dr. David George, an internal medicine physician who makes the trip in from Lebanon to work at the clinic, says his volunteer work for this community is a way of giving back.

“I’ve been very fortunate,” George says. “Two of my grandparents were immigrants, they had a chance and were successful. They had fortunate kids and grandkids, and I think we’re helping these patients get a chance.”

But Family Community Clinic also serves a demographic that has grown since the economy tanked in 2008: those who have been laid off and lost their employer’s health coverage, and those who don’t qualify for Medicaid but can’t afford insurance.

The volunteer nurses this Saturday are Emily Wade and Julie Gahm, who began working at the clinic last year after hearing about their need for nurses during mass at St. Joseph. They volunteer once a month and see a wide range of patients.

“There was recently a woman who just moved here from California, and her husband hadn’t started his job yet, so their insurance hadn’t kicked in,” Wade says. “She had a horrible problem in her ear, couldn’t hear out of it, and was dizzy. But we were able to clean her ear, and she was fine. And she was like, ‘I don’t know what I would have done without you all.’”

During our Saturday visit, the first patient to come through the door had recently been laid off and lost his insurance.

“It’s sad to think about where they’d go without this service here,” Wade says.

Though there are other services for the uninsured in Louisville, they are often fraught with problems.

There are seven Family Health Centers in Louisville — funded by the federal and city government — that provide a wider range of primary health care services, with patients charged on a sliding scale based on family size and income.

But Mary Lee Eady — Family Community Clinic’s manager, nurse and regular mainstay since its inception — notes that the backlog at such clinics, which treat more than 43,000 patients annually, often delays needed care.

“(FHCs) are wonderful clinics, but as you can imagine, they are overloaded,” Eady says. “It takes somewhere between two to three months for an adult patient to get a first appointment. That could be a diabetic with a very high blood pressure, so fast access to care can be an issue.”

While Family Community Clinic does not have the resources to treat every patient with a serious condition, Eady takes pride in giving patients the information they need to find where to best receive care.

“When you have a language barrier, you don’t really know where to go to figure out where you can be seen,” Eady says. “But one thing I’m really pleased about is that our nurses and interpreters sit down and literally talk to everyone who comes in, even if we know it’s a problem that we can’t address. We go over all of the resources that are available so we can steer people to another place.”

Another option of last resort for uninsured patients is University Hospital, which provides emergency care to 60,000 indigent patients a year, paid for by the Quality and Charity Care Trust provided by the state and local government.

However, that budget is currently in danger, as health care costs have begun to exceed available revenue. University Hospital announced it might have to reduce the number of indigent patients served by 5,000 next year, and based on the budget passed in Frankfort’s General Assembly this year, the Quality and Charity Care Trust might decrease significantly.

The budget stipulates that if the cash-strapped Metro Government reclaims a rebate from University Hospital, as it did this year with $2.6 million, then the state government will withhold that same amount.

Dr. Rick McChane, a Family Community Clinic volunteer from the University of Louisville Pediatrics department, notes that the uninsured population’s lack of access to primary care puts a strain not just on health, but on hospital budgets.

“Part of why they’re seen at the emergency room is that they don’t go to a primary care physician for either chronic health issues — hypertension, diabetes or an acute illness — and then they get sick enough that they have to go there,” McChane says.

In addition, he says many uninsured go to the emergency room for what should be basic primary care — knowing they likely won’t be turned away — which is extremely expensive for either the patient or, if indigent, the hospital.

“People are getting health care, we’re just doing it in a very inefficient way,” McChane says. “If we ever do get to the point of universal care, the money’s there, if we can just use it more efficiently. But the devil is in the details.

“It’s more appropriate for people to utilize a setting such as this for primary care, if it’s available,” he adds.

As for now, Family Community Clinic can only provide a small, yet crucial Band-Aid to the larger problem of the uninsured population.

Angela Cao, Family Community Clinic’s community relations manager, says they average about 10 to 12 patients every Saturday. However, she says they actually have the ability to take in as many as 30 patients per day, and part of their struggle is getting the word out about their facility.

Cao, who also provides interpreting services at the clinic, goes to community meetings in low-income neighborhoods to publicize their service. But she often encounters people who think it’s too good to be true.

“People have a hard time trusting that there are no strings attached,” she says. “We just try to emphasize that we’re all volunteers and here to help.”

In the long term, clinic manager Eady wants to see Family Community Clinic expand their services to treat more chronic illnesses and add a weekday to serve more patients. But that ultimately depends on an increase in donations, grants and volunteers.

“We’re just so grateful for all of our volunteers, especially the 20- and 30-year-olds that give up their time and keep coming back,” Eady says. “And we’re always looking for new volunteers: internal medicine physicians, pediatricians, nurses, any kind of help we can get.”