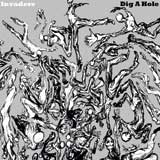 Floating was simply one of the best rock debuts ever by a Louisville band. That’s a big statement, but one Invaders backed up 11 times on their debut. The band split shortly before finalizing their follow-up, Dig a Hole, now finding our ears at last. What made Floating so special was engineer Kevin Ratterman; it could have been five very different sounding platters depending on what one did with the raw audio. Its bright, fuzzed-out and happily medicated trip through an Albini-cal Mystery Tour was but one of several possible iterations. Dig a Hole sheds light on what those alternate universes would sound like. If the record is jarring, I direct you to my Rosetta stone, “Bottle Rocket.” The harder, angrier, more intense drive could be a glimpse into why they shuttered so quickly.