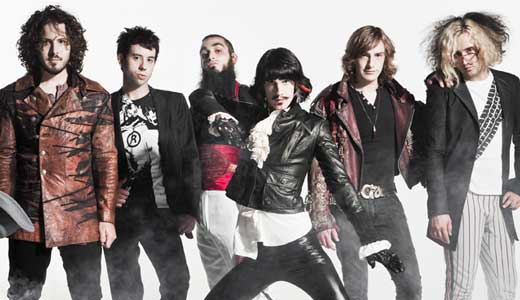 Welcome to Louisville. Yes, we are the home of KFC, Muhammad Ali, Slugger bats, yada yada. We are also, of course, the home of My Morning Jacket, Slint, Bonnie “Prince” Billy, and a thousand other great bands. That’s why you’re here, right?

OK, maybe you’re here for the horses. But what live music can you catch while you’re with us? Let’s go night by night …

We don’t know what your personal groove is (Christina Aguilera? Crass? Coltrane?), so we’ll try to break this down as easily as possible.

Buzzed-about indie rockers Walk the Moon play at the gorgeous Waterfront Park, with opening indie/Americana rockers Ha Ha Tonka at 7 p.m. It’s free with a Pegasus Pin (you’ll need to learn what that is).

Country star Clay Walker plays for free at Fourth Street Live (8 p.m.), while the infamous Phoenix Hill Tavern offers up one of the most fabulously exciting live bands in the region, Cincinnati’s Foxy Shazam. The Queen-style rockers are joined by the Hellzapoppin Freakshow and some party-crazy local bands (8 p.m., $15).

OK, now it’s really starting to get busy. If you love the Americana rock of the Old 97’s and the Sam Roberts Band, and are still sober at noon, head on down to the studios of public radio station WFPK for the live broadcast of their “Live Lunch” show (free, limited seating).

At 9 p.m., catch the Old 97’s again at Headliners Music Hall ($15 adv., $18 DOS). At 10, Third Street Dive has ska with The Pinstripes ($6), and the Hideaway Saloon offers the Deep Fried 5’s pseudo-funk ($5, naturally); for something progressive, Zanzabar offers krautrockers CAVE with the more obviously danceable Today the Moon, Tomorrow the Sun (10 p.m., $6).

Today’s the day! You probably weren’t invited to the Barnstable-Brown Party, and you probably didn’t score a personal invite to tonight’s “T.I.’s Celebrity Derby Gala” at the Kentucky Exposition Center (10 p.m., $60-$100), but don’t despair. Everything is going to be all right.

The big event, however, for the Louisville music scene is the debut of the art space called The Mammoth. Bay Area art-witch songtellers Faun Fables and the nonstop “circusgypsyprogjazzpunk shenanigans” of Lexington’s Ford Theater Reunion headline this epic gathering of some of our finest weirdo bands, including Softcheque, Parlour, Madame Machine, and w.n.b.a. (7 p.m., $10).

Well, that’s it. We’ll probably never see you again, folks, but we hope you have fun while you’re here! It’s kind of funny — we’ve got really interesting bands here, some cool venues (plus many great restaurants, art, parks, etc.), and yet, most of it goes completely undiscovered during Derby …

Louisville: A weird place to vacation, but a great place to live.