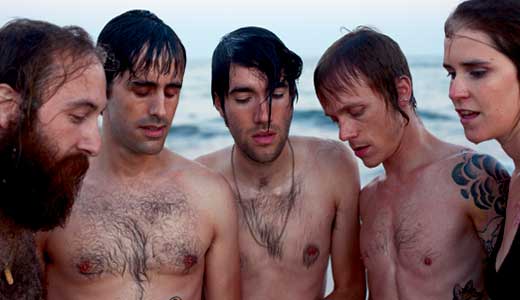 Sometimes, despite all best efforts, the meeting of the subject and the journalist doesn’t quite work out. In the case of the band Dark Dark Dark, their current stint in a recording studio in New Orleans, where they are working on their third full-length album, has taken up most of their waking hours this month. Music lovers should embrace this commitment to excellence, while fans of award-winning journalism will surely weep.

New Orleans is a perfect setting for the band, whose bio cites “minimalism, New Orleans jazz, Americana, Eastern European folk, and pop” as some of the influences that inform songwriters Marshall LaCount and Nona Marie Invie. Dark Dark Dark is a band out of step with modern trends in popular music; the sextet is downright gothic in their romanticism, while living by the underground aesthetic of playing (musically) by their own rules. The Minneapolis public radio station The Current wrote about them: “Consisting of piano, accordion, cello, guitar, upright bass, drums and multiple vocalists, Dark Dark Dark creates beautiful and often haunting folk soundscapes.”

The band already has friends in the greater Louisville area, including guitarist and LEO columnist Nathan Salsburg, and Elephant Micah leader Joe O’Connell, whose song “Wild Goose Chase,” about life on the road, has also become a favorite for them to perform. The last time Dark Dark Dark was in town, promoting their album Wild Go, the locals guided them to an in-store performance at ear X-tacy Records and then to their ticketed show at Skull Alley. While neither of these venues survived, the band returns to Louisville Sunday for a performance at Uncle Slayton’s (in the former home of Skull Alley), presented by the WFPK-produced radio show “The Weekly Feed.”

“We try to create a magical space with our performances,” singer and pianist Invie said in a statement. “I’m always blown away by the number of people that come up to me afterward and say how much the music touched them. I love it when people can dance and have fun at our shows, but it’s when people are quiet and I can tell that they are feeling it on a personal level that I feel like I’m really connecting.”

Dark Dark Dark was founded in Minneapolis in 2006 by LaCount and Invie, and released their first full-length, The Snow Magic, in October 2008. A surprising EP of Bjork-ish remixes came out 11 months later, the archly titled Bright Bright Bright EP was issued in March 2010, and a second full-length, Wild Go, followed that October. Today, only Invie remains in Minneapolis, as other members have moved to Chicago and New Orleans.

The band’s last album cover featured naked photos of some band members, as seen from the backside. Last month, the band noted on their Facebook page, “FB, after two years, censored our album cover for ‘standards violations.’ The modest booties (Jonathan, Nona, and Marshall) had a good run, though.” A photo shoot for their next cover was one reason why LEO had trouble connecting with the band this time; we’ll see soon enough what they’ve been up to this time.