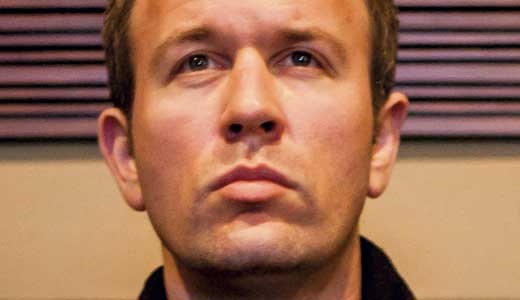 When Brendon Small — the Berklee College of Music-trained guitarist and showrunner of the popular Adult Swim TV series “Metalocalypse” — decided to release his first solo album on April 29, he was advised to stick to the music industry practice of releasing albums on Tuesdays. The clean-cut, 37-year-old metalhead said no.

“I said, ‘I am gonna put out a record on a Sunday, because I don’t think anyone really gives a shit.’ Because I’m not putting it out in stores — it’s available for download on my website and a couple of other places where you can get it — I’m doing the whole thing myself. So I figured, ‘What’s the cleanest way for me to put this record out? When I have the new premiere of my series.’”

“Metalocalypse” returned for its fourth season last week, following the animated adventures of a popular and powerful death metal band called Dethklok. The series has released two soundtrack albums of music Small composed for the fake band, with him playing the real guitars. For his new album, Galaktikon, Small has done it himself, paying for everything from the other musicians to the mastering, because Adult Swim and their parent company, Time Warner, own the rights to all things “Metalocalypse,” and paying for — and owning — his own personal material is “cleaner,” Small says. “At some point, you want to own it yourself and not get six lawyers on a phone call.”

Adult Swim has been supportive in many other ways for Small. In 1999, the then-23-year-old was discovered by TV producer Loren Bouchard while performing in a Boston comedy club. Bouchard was looking for talent for his new animated series, “Home Movies,” and Small not only voiced and shared his name with that series’ main character, he also found ways to add his guitar playing to its soundtrack. As the show progressed over four seasons, Small’s music became heavier, more reflective of his personal obsession. That music birthed the idea for his follow-up series.

Though Small developed and runs the show, writes dialogue, does voice acting, and writes and performs music for “Metalocalypse,” he bristles at the term “control freak.”

“If a guy’s running a TV show and he’s not a control freak, that show’s gonna suck. I’ve known guys like that … You’re always only three bad decisions away from it all going down the toilet. I’m not a control freak with humans — I don’t tell ’em how to dress or how to speak or anything like that. (The show) has to be a certain way, or it’s not the thing.”

Commitment is a common thread between the music and the comedy. “(Real death metal band) Cannibal Corpse takes itself dead seriously. If it didn’t for a minute, it wouldn’t work. It’s almost like a great actor — they’re not gonna go, ‘I’m not really a wizard, but I’m playing one right now.’ You can’t drop the veneer, even for a second. I think even the people who find the ridiculousness fantastic will also be hurt by that. ‘Oh … they’re joking?’ You have to commit 100 percent in performance, album cover art, lyrics — all that stuff.”

Galaktikon is a concept album about a superhero going through a divorce. It’s more melodic than Dethklok’s brutal sounds, closer in sound to the ’80s European metal bands that thrilled Small as a teen.

“That young boy lives within me. It was such an important time for me, discovering metal and guitar; those are the years you start developing your personality and making choices.”

Small, who still performs comedy, understands the fine line most heavy metal walks between earnestness and parody, perhaps better than most. “It’s grandiose, and you’re giggling at it, as a 15-year-old, but you also recognize its awesomeness.”

Even in his youth, Small recognized metal’s cartoon-like qualities, theatricality and storytelling potential. For Small, creating a TV series like “Metalocalypse” seemed obvious: “If we hadn’t done it, somebody else would have, and that was part of my pitch. ‘Somebody else is going to fuck this up — we can do it right.’”