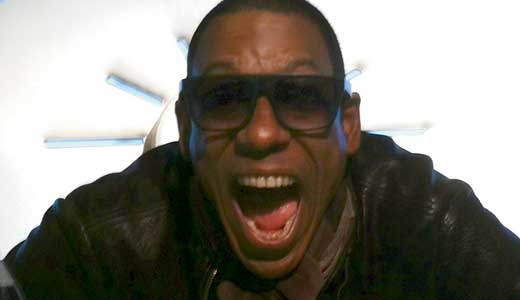 An original cast member of “Mad TV,” a memorable big screen presence, and star of the “Make 7 Up yours” campaign, Orlando Jones took a few minutes to talk about where he comes from (Alabama and South Carolina) and where we’re all going.

LEO: Do you think growing up in the South had an effect on your sense of humor?
Orlando Jones: The short answer? Yes. I don’t know how it’s possible not to.

LEO: Was it the culture?
OJ: Well, yeah … we’re outsiders really. If we’re being honest, to people in New York, we’re not even the “flyover” states, we’re somewhere south of the “flyover” states. That’s how L.A. and New York think of the South. I think my entire persona is a function of being an outsider, coming from a place people don’t care about or understand. I think it’s funny to hear what they think about our culture, our tradition and the way we see the world. L.A. is the most segregated place I’ve ever been … (laughs) so as far as I’m concerned, these cosmopolitan motherfuckers are full of shit.

LEO: What guys inspired your brand of comedy?
OJ: I tend to like Bill Hicks, Sam Kinison — or the way people did stand-up where they could say things from the stage you couldn’t say other places. Like stuff you weren’t going to hear in movies or on television, when they actually had something they wanted to talk about. Back when it was actually about the human condition. I like that version of stand-up. Guys like George Carlin will always be revered, but I like the guys that talked about life.

LEO: You worked on what I would consider to be two of the most influential and often overlooked shows in relatively recent memory: “Herman’s Head” and “Roc.”
OJ: Yeah. “Herman’s Head” is weird because it was a high-concept situation comedy that was multi-camera. If you look at the landscape today, there are maybe two multi-camera shows and they’re both on CBS. So that kind of gig is slowly coming back into existence, after disappearing for a long time.

“Roc” was crazy because we did it live. It was real live TV — we didn’t have a safety net, there was no 10-second delay. When we did that, no one had done a sitcom that was multi-camera, live-to-air, since “The Honeymooners” in 1953. So there was a sense of history there because no one had done it in over 30 years when we did it.

LEO: You had a somewhat public war of words with Sarah Palin last year. Can’t we all just agree that she’s pretty ridiculous?
OJ: I’m not a real political dude, but I find her stances, across the board, to be … crazy. Granted, Republicans and Democrats have both said things that are a little insane; but then there are people on both sides who take stances that are more insane. And she is definitely amongst that number of people.

LEO: Last year you were in a documentary about Lenny Bruce. Do you fear that in the wake of big names like Carlin and Pryor, that Lenny Bruce’s influence might be forgotten by future generations?
OJ: No, not to people that know comedy … but I guess it’s possible when it comes to good people. Lenny Bruce was a rebel. He fought for a level of freedom of speech that is deteriorating now — there are a lot of police around now, telling you what you can and cannot say. You have to think, he pushed lines in a time when he went to jail for saying a certain word. It seems weird to me that politicians say things that they really mean that are hateful, anti-Semitic or sexist — and we don’t ask them to apologize. They’re being serious. But we ask comedians to apologize when they weren’t being serious, they were just trying to make us laugh. It seems to me that Lenny Bruce is more alive than ever, and what he stood for is more important than ever.