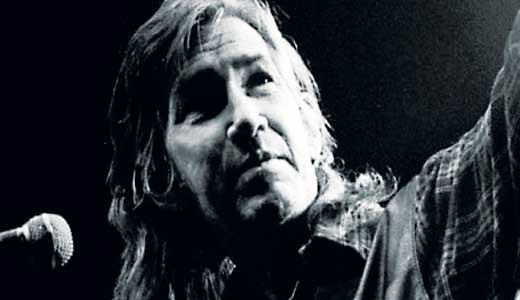 Brian T. Atkinson: Can I ask you a question first?
Edward Lee: Sure!
BTA: How did you get into Townes?
EL: Townes died on the same day as my grandmother. I had known of him, but I had never really listened to him. I don’t know why, I listen to Dylan and all those guys. There was something in the paper the next day, “Famous musician dies” — it was the same day as my grandmother. I decided I would go out and buy a CD.

BTA: What was the CD?
EL: It was the first CD, Townes Van Zandt. And that was it — from there I was hooked. I’ve been a huge fan ever since … As you know, I’m not a journalist, I’m just a fan. I came up with some questions, and I thought you’d have some good answers for them.
BTA: All right!

EL: Why Townes? Why now? And, do you think he’s more or less relevant as an artist today than when he was alive?
BTA: The “why” is the easiest one, because he’s my favorite songwriter. There’s no question in my mind that my first book was gonna be about Townes. What was the second part?

EL: Why now?
BTA: Oh (laughs), I wanted to write a book. I knew that there were two biographies in the works when I started this, so I wanted to do a Townes book, but I didn’t want to do it just to do a third biography, a couple years after the second one, which was just a couple years after the first. That made it a little difficult, actually, but when I came up with the plan, it seemed to work out.

On his relevance, man, when I started this nine years ago, and I was interviewing songwriters … nobody seemed to know who he was. I would bring him up — “He’s my favorite songwriter” — and talk about some songs, and I’d get blank stares; now, I do a lot of interviews for the Austin American-Statesman with bands that come through town, and it seems like — without me even bringing it up — a lot of the younger songwriters, especially, will namedrop him as “I’m trying to be taken seriously as a songwriter, and I listen to Townes, of course.” I think he seems to be getting a lot bigger than he was in his lifetime.

EL: It seems like the legend keeps growing.
BTA: Yeah, and I hope for the right reasons. Everyone knows about the drugs and the booze and everything. I hope the songs are what really — I hope he gets famous one day! I think he deserves to be talked about with Dylan and Paul Simon — all the other songwriters everyone knows.

EL: I get the sense that Townes was a really funny guy and a hoot to hang out with. That’s something that really comes through in the book. You listen to some of the songs, and you get this image of a guy who’s depressed, in a bar, writing these sad lyrics. Is there anything about your perception of him that changed from when you started writing the book until you finished?
BTA: Just what you’re saying. I’ve talked to Guy Clark a couple times, and he always says, “Townes was the funniest son-of-a-bitch I ever knew.” I guess there are those two parts of the personality — it’s not that he wasn’t the guy sitting in the bar, depressed, writing a song like “Nothin’” that is just like a stabbing in the eye, y’know? But he also was writing “No Lonesome Tune,” which was one of the sweetest songs I think I’ve ever heard. He definitely had a sweet, funny part to his personality, and it did sort of surprise me that a lot of people talked about that, as opposed to the darker stuff … I think people do want to remember the good times, having laughs, as opposed to when he was pissin’ them off (laughs).