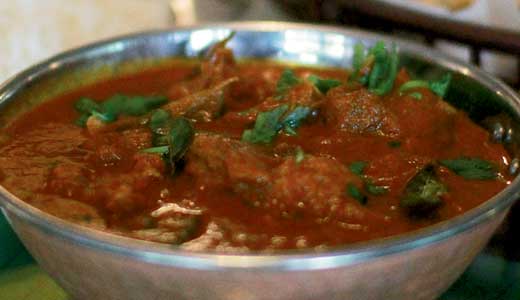 Bombay isn’t Bombay anymore, it’s Mumbai. And as India takes its native names back, Madras is Chennai, and Calcutta goes by Kolkata. But “Mumbai Grill” just doesn’t have the same curb appeal as Bombay Grill, somehow.

Still, even if you say “Mumbai” and I say “Bombay,” let’s not call the whole thing off. Recent visits to Bombay Grill have me persuaded that it’s leading the growing local pack of Indian restaurants in a hotly competitive food fight right now. The food seems authentic, an assumption that’s substantiated by the regular presence of crowds of happy Indian-American diners.

More important, the Indian food here is consistently delicious, served in bright, clean and comfortable suburban shopping center environs, and service has been invariably friendly, quick and smiling. We’ve got a half-dozen Indian eateries around town, and a couple have stuck for close to 15 years. It’s a good thing, and if you still haven’t really embraced Indian food, perhaps it’s time to give it a try.

If you don’t have much experience with Indian cuisine, we’ll excuse you if you think it’s nothing more than bowls of fiery-hot curry, rice and maybe a big bottle of Indian beer. Not that there’s anything wrong with that, mind you; but it’s worth knowing that Indian food is actually as diverse and interesting as India itself, and that’s saying a lot.

From its southern tip in the tropics to its northern heights that reach to the top of the Himalayas, India incorporates fields and farms, jungles and deserts, plains and great river valleys, some of the world’s tallest mountains, and nearly 5,000 miles of ocean coastline that provide a wealth of seafood.

With 1.2 billion people in a country about as large as all of Europe, India is the world’s second most populous country (after China), and is wildly diverse in religion, culture and custom. What that means to us is that some Indians shun beef but eat pork; some reject pork but dine happily on cow; and quite a few avoid eating animals at all, turning this preference into some of the world’s most interesting vegetarian fare.

Bombay Grill earns my applause for opening its menu to the full range of Indian regional cuisines, offering samples of all those flavors from just about every corner of the subcontinent. You can sample a broad selection on the all-you-can-eat lunch buffet ($7.99 weekdays, $9.99 Saturdays and Sundays).

The menu, though, offers a much wider range of treats than you’ll find even on its expansive buffet line, offering more than 100 options divided partly by primary ingredient (lamb, chicken, seafood, goat and vegetarian), partly by cooking style (tandoori oven, biryani rice dishes) and partly by region (dosai and uthappam from South India). It’s all affordable, the menu topping out at $12.99 for seafood courses, $10.99-$11.99 for most meat and seafood entrees, and $8.99-$9.99 for nearly two dozen vegetarian dishes.

We put the system to a stress test recently with a sizable group of 11 for dinner, a crowd that proved to be dwarfed by an even larger anniversary party. No worries — service and the kitchen handled the load well.

We passed around all manner of dishes, and really had no complaints about quality or preparation on anything. Even with a bountiful meal, our large group joined the clean-plate club.

We began by sharing four or five appetizers, including medhu vada ($3.99), which look like Nord’s finest but are actually dense and savory “fried donuts” made with lentil flour; samosa turnovers ($3.99), or spicy mashed potatoes and peas wrapped in fried pastry cones the shape of oversize Hershey Kisses; a South Indian masala dosai ($5.99), or a giant crepe rolled around spiced potatoes; and a veggie appetizer plate ($8.99), featuring four chutneys, pakoras (onion fritters), a snow-white iddly (rice bread), hot green chiles peeking out of a fried wrap, spiced fried potato wedges, another medhu vada and a samosa, and something called a “vegetable cutlet.”

Main courses passed around the table included such traditional goodies as chicken tikka masala ($10.99), tender chicken bites in an orange-pink, mildly spicy tomato and butter sauce; chicken tandoori ($10.99), bright red and sizzling from the clay oven with sliced onions; and lamb saag ($11.99), chunks of lamb in a savory spinach-and-cream sauce.

An average share for dinner would have been about $30 per couple; we picked up the appetizers and a big Indian beer and still got out for $66.15 plus tip.