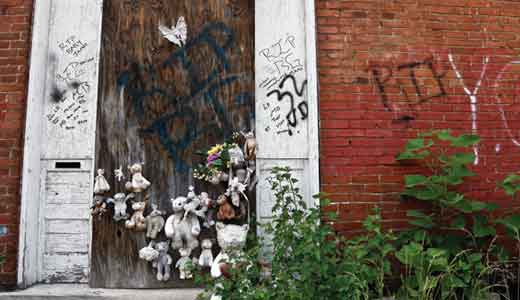 Keisha Harper’s cell phone rings around 2 p.m. on Thursday, May 17.

“Did you hear what’s going on at 32nd Street?” a familiar female voice asks. It’s her former co-worker at the Parkland Boys and Girls Club, which closed its doors last fall.

“Yeah, I’m watching it on the news,” says Harper, a 30-year-old who’s seeking work but unemployed. She hasn’t strayed from the television since the news broke less than an hour ago: Two young men were shot to death near the corner of South 32nd and West Kentucky streets. Two other men also were shot and transported to University Hospital.

“You know it was CJ?” says the woman on the other end.

“CJ” is Craig Bland Jr., a 22-year-old who frequented the club through his teenage years and even into young adulthood for games of dice or basketball.

As the administrative clerk at Parkland, Harper scanned in guests at the front desk. Most visitors, including Bland, lived in the neighborhood. Tyson Mimms, 24, occasionally popped in as well. Now both are dead, draped in sheets on the pavement. She begins processing the faces of their friends, loved ones, siblings.

Watching news helicopters hover over the maze of media, sirens and crime scene tape, Harper feels compelled to go to down there. Mostly, she wants to check on a teenage brother of one of the deceased whom she’d grown close to during her time at Parkland.

“You sure?” asks a friend who’s watching the news with her.

“Yes,” she says. They head out, along with Harper’s sister.

The three mull impossible questions during the short drive: If the club were still open, would this have happened? Maybe someone could’ve intervened before shots were fired. How could this happen in broad daylight? Why?

Theorizing often trails this kind of violence, more of which will follow in Parkland in the coming days.

Harper is the only one to get out of the car. She passes the boxy, brick Boys and Girls Club where weeds claim the chain-link fence.

She crosses the street to a mechanic’s lot and spots the young man she wanted to console, but he quickly fades into the mass of detectives, neighbors and reporters. Harper walks a little farther down 32nd Street, about a half-block.

A boy on his bike rides by yelling a loud message: “F— T.Y.!” Tyson Mimms also went by T.Y.

A crowd forms across the street from Harper.

She notices a petite, pretty woman who begins to wail, desperate to get across the crime scene tape. A friend is holding her back.

“Let me get through here,” Harper hears.

She thinks she sees a young man spit on this woman. There are screams, but she can’t hear what’s being said. The shrieks escalate.

Another woman who appears round in the belly walks up. Her gaze is intense, angry.

“These two are going to fight,” Harper thinks.

According to police, that’s when 24-year-old Cheetara Goldsmith — who is pregnant — reveals a handgun. She lifts, aims.

A child is now parentless.

Harper freezes. Her large brown eyes ingest the sight before her mind can catch up. One second. Two seconds.

Her flip-flops smack the hot sidewalk as she rushes toward the car. All around her, bodies dive behind cars or flatten to
the cement.

But Harper is silent, sprinting.

She hops into the passenger seat. The car is still running.

Police order the shooter to put down her gun, but she refuses. An officer fires one shot, hitting Goldsmith, who sustained non-life-threatening injuries. She has since been charged with murder.

We just saw a woman’s last scream, last cry, last breath, they realize. A fog from the chaos follows them on their familiar drive down Greenwood toward Harper’s home. Somehow they end up on West Broadway near Shawnee Expressway. No one remembers where they took a wrong turn.

Harper feels too numb for tears. She won’t cry later that day. Nor will she cry when she visits Makeba Lee’s memorial and finds that someone has thrown a T-shirt over it, a gesture of disrespect. Tears will arrive four days later, during the 11 p.m. news. A picture of Lee — a smiling mother — holding her baby appears on screen.

But on that Thursday afternoon, once Harper returns home, she swings into protective mode. She rapidly calls other former Boys and Girls Club employees with a warning: “Don’t come here. They’re still shooting.” One of the calls goes to Eddie Woods.

Over the last several days, Eddie Woods has received a lot of those “be careful” calls and texts. As co-founder of a youth outreach organization called the LIFE Institute, he’s been mentoring kids for years, particularly those at risk of veering toward drugs and gangs.

On Thursday, when the easygoing 60-something with a signature gold hoop in his left ear got the news, it hurt. He knew “all of them.” Woods operated a mentoring group out of the Parkland Boys and Girls Club for years.

The night of the shooting, he drove down 32nd Street. At the Greenwood intersection, he noticed three kids, no older than teenagers, yanking on the door of the club. He asked a woman living nearby if kids often check to see if it’s open. She told Woods, not until today.

When he recounts this story two days after the shooting, his eyes redden.

“It was more than a Boys and Girls Club. It was sort of a spot for folks to defuse and for folks to calm down for a minute,” says Woods, wearing a Boys and Girls Club golf shirt. “Even if it meant that you were in the middle of something going on that was violent or something that was out of order, you could run into the club and get someone to talk to or get a voice of reason.”

The Salvation Army closed Parkland and three other clubs in October due to lack of funding.

Even if the club had remained open, Woods says, “I don’t think it would’ve kept those guys alive.”

Both Bland and Mimms had gang connections coupled with criminal pasts.

In the last two years, Bland was charged with marijuana possession and carrying a concealed weapon. This year, he violated his probation on the marijuana charge.

Mimms, meanwhile, has a far lengthier rap sheet, including drug possession, carrying a concealed weapon and witness tampering. In 2009, he was charged with the murder of Alfred Smith near 32nd and Kentucky. The case was dismissed due to a lack of evidence. This year, a case was pending against him for allegedly hitting a man with his car in a scuffle over a parking spot.

Woods knows troubled young men, especially those from unstable families, must choose their role models. If all goes well, they turn to a sturdy relative or pastor. If not, a gang leader. It’s why Woods encourages change without demanding kids abandon dangerous ways. It earns him genuine trust, but a few still stray.

On Thursday night, Woods wrote on his Facebook page: “I will miss CJ’s big smile and Tyson’s guaranteed ‘hello’ when he saw me. Three more gone, and summer is not here yet …”

Woods and several neighbors tell LEO there have been rumors of retaliation, including shots fired near Shawnee High School and outside Cole’s Night Club just a few blocks from Thursday’s homicides.

“Things will get worse before they get better” is a phrase heard repeatedly.

Although on Thursday evening Louisville Metro Police Chief Steve Conrad assured the public that everyone involved in this spate of gun violence was either dead or accounted for, he has since backed away from that statement.

Woods hopes LMPD opts for more proactive policing in Parkland. Rather than saturating streets in the aftermath, he urges officers to “sit on the porch” and talk with residents in an effort to get ahead of trouble. After all, 32nd Street is notorious for being a “hot” neighborhood, particularly between Garland and Greenwood.

The reasons extend far beyond anything police can do. Woods cites the economy and the demolition of housing projects that misplaced poor families.

“For an area or neighborhood to be violence-prone, criminal activity-prone, there’s got to be a lot of factors that come into play, and a lot of them don’t have to do with any singular thing that you can come up with like relocating people and numbers of dropouts,” Woods says. “But when you put a lot of those factors together, you come up with a pretty lousy condition, and unless you address the condition, you’re going to be constantly chasing activities.”

At least one tangible improvement was just announced. The Boys and Girls Club of Kentuckiana will purchase and reopen the Parkland club this summer. President and CEO Jennifer Helgeson says the deal has been in the works for several months.

Woods applauds the move. But he knows this won’t solve everything. Parkland bears many systemic scars. Weathered, limp teddy bears cling to an abandoned two-story building on 32nd and Kentucky tagged with 22 “R.I.P.” messages. Nearby, boarded-up apartments and houses sulk behind wild grass. The street looks quite different, more inviting, a few blocks south, but the site of Thursday’s crime scene is a telling backdrop.

On the Sunday after the murder, at the corner of 32nd Street and Greenwood Avenue, about a dozen members of Canaan Christian Church link hands in a prayer circle. A few feet away, a collection of other churches wrap up a peace rally led by the Justice Resource Center. A suited minister growls out his final thought: “Look down on our brothers. We need you and we thank you. Amen”

Across the street, two longtime Parkland residents watch. A young man in all black with a silver cross dangling at his chest begins to talk about a new outreach effort he’s involved with called Save Our Streets. He’s a musician who goes by the name Sam Majesty Starr.

Under a 90-degree sun, Starr watches through aviator sunglasses as the two disparate groups form one large prayer gathering. He says he’s not surprised so many separate vigils and forums have cropped up in the last few days. The shooting spree has yielded urgency.

“Now people who get in their pews, get in cars and lock their doors feel compelled to do something,” he says.

A half-hour later, Starr heads to a community forum at Cole’s Night Club. More than 100 citizens fill plastic chairs under a blue and white tent. An array of city leaders, from Mayor Greg Fischer to religious figures, field concerns and commit to reclaiming the streets and the youth slipping toward prison or death.

Mayor Fischer talks of his summer jobs program that will recruit hundreds of low-income, at-risk youth to learn about business while working for a wage. Preachers vow to connect to pain and frustration lurking behind violence.

Since May 17, pledges of support have poured into Parkland. But some longtime residents receive it with skepticism, especially when issued by politicians.

“I’m angry because this is nothing new. This has been going on for several years and all the quote-unquote leaders do is talk,” says west Louisville native Marsha Bailey following a series of press conferences featuring candidates in the District 1 Metro Council race the day after the murder.

All can agree there are no easy solutions.

And as media coverage fades, some wonder if the commitment to improve life for the crime-riddled blocks of 32nd Street will endure. Starr insists it must. To him, Thursday marked a new reality. Not only are three young people dead, but a pregnant woman arrived at a crowded crime scene, as kids returned from school, and without hesitation, pulled the trigger.

“That right there, that’s a sign of times,” Starr says. “That was a sign of the times and the way our community is headed … there’s no fear.”