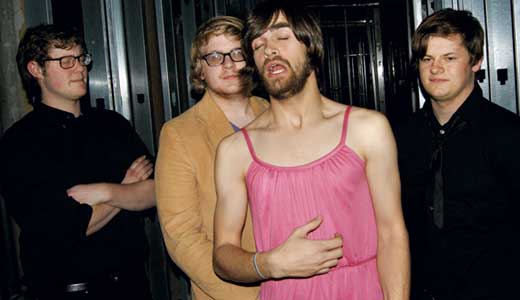 After recording a demo as Jackalope, the band now called via animo has a new guitarist, and guitarist Kyle Thompson has switched to bass.

“I think we are a completely different band now, and I’m really excited about the new sound we have,” says Thompson. “Without sounding too pretentious, I think we went from being a boring four-chord punk band to having something that mixes the aesthetic of ’80s hardcore with indie rock … That definitely sounds pretentious.”

Their new EP, This Courage is Bittersweet, was recorded by Mike Stewart at the House of Wax last fall. They then sent it to J. Robbins, in Washington, D.C., for mixing. In addition to leading several influential bands of his own, including Jawbox, Robbins has also worked with Louisville’s Slamdek Records, and the bands Black Cross and Coliseum.

LEO: Did you get to work with J. Robbins in person?

KT: Unfortunately, we did not, due to time constraints and everyone’s school schedule. We did everything over the phone and email, but I still feel like he got a feel for what we are going for, and I’m super pleased on how the songs turned out … We’re stoked to be able to keep the Louisville/D.C. connection alive!

LEO: Who are some of your other favorite bands?

KT: Whenever we talk about covering songs, I notice that none of us listen to that much music in common. To me, two bands that have had a huge influence on how I approach via animo, especially live, are Hot Water Music and Fugazi.

LEO: Do you prefer playing house shows to playing in bars?

KT: There are definitely benefits to both. I feel like bars are a little more inviting; a lot of people are kind of hesitant to go to house shows sometimes because they can feel exclusive. But, with that being said, we definitely prefer house shows. We’re great friends with the people that live at those houses, and all-ages is a huge plus.

via animo will play a house show on Tuesday, May 8, in Louisville. Listen to the EP at facebook.com/viaanimo and buy it at viaanimo.bigcartel.com.