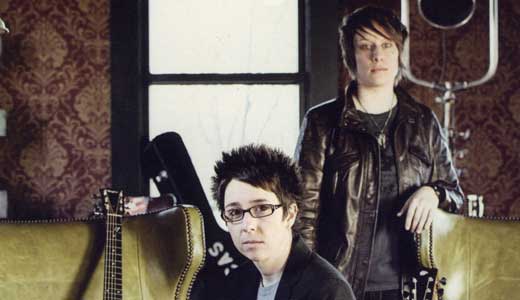 Jumping on the Bridge

After four years of playing together, Audrey Cecil and Amanda Lucas have made it official. Their first album as Bridge 19, The Fall Back, is being released this week, with a performance at the Kentucky Center on Saturday (8 p.m., $10).

“Fans kept asking, ‘Where’s the CD with you both singing together? We want that.’ … We are friends first, bandmates second. We’ve been pals since we were little kids. It just so happens we have the ability to make pretty music and run a business together.”

As kids, both listened to the country music their parents enjoyed, and Cecil was also exposed to bluegrass and classic rock. As teens, both fell hard for Alanis Morissette. Lucas was also turned on by No Doubt and the Dave Matthews Band, while Cecil gravitated toward early Sheryl Crow. In college, “I really started getting obsessed with the stuff that shapes me now,” says Cecil. “Fleetwood Mac, Indigo Girls, Sarah McLachlan, Paul Simon.” Today, in their 20s, both listen to a lot of singer-songwriters. Lucas also cites pop/rock, while Cecil loves “a lot of classic R&B.”

LEO: How many of your songs about relationships are “happy” songs, lyrically?

AL: About half of the songs I’ve written about relationships are “happy” songs, lyrically. Sometimes the “happy” songs don’t make the cut for the album for various reasons — too slow, too cheesy, etc.

AC: Amanda’s definitely the one to answer this question. She’s got the relationship songwriting covered. My songs tend to fall all over the spectrum in terms of topics. Sometimes about relationships, sometimes not, sometimes written using a relationship as a metaphor for something else.

LEO: If you got fat, would you consider changing your name to Fridge 19?

AL & AC: We considered “Refrigerate After Opening” for a band name, so, yes, we would — but only if “fridge” is capitalized. How about FRIDGE 19.5?