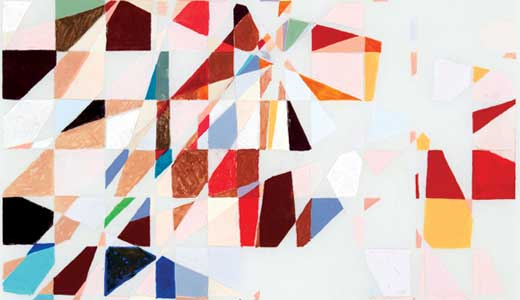 Awkward x 2, the likely/unlikely duo of Rebecca Norton and Jeremy Gilbert-Rolfe, are painters who are interested in aesthetic philosophy and its practical application. The two teamed up in 2010 and work collaboratively on each painting. Sometimes in the same studio, sometimes sending them back and forth across the country, they work in tandem until each of their contributions is fused beyond the point where individual contributions can be recognized.

Norton, a 2004 graduate from the University of Louisville, seems an unlikely collaborator for veteran artist, writer and critic Gilbert-Rolfe, but they share complementary aesthetics and a rare degree of philosophical simpatico that are expressed on the canvas. Before they started working together, Gilbert-Rolfe’s paintings consisted mostly of grids, Norton’s of fractures; combined as Awkward x 2, their compositions possess a balanced dynamism born from both. The team’s technique is primarily focused on obliterating individuality; the result of the fusion is an energetic explosion of visual energy. Some are pink-hued and sensuous, others blazingly white; they are as interesting as the mouth of a lover you want badly to kiss.

The goal of the work was not only collaboration but also exploration. One of the aims of Awkward x 2 is the uniquely contemporary task of capturing and recording the light that radiates from our computers; light that is flat on the surface yet pulls us in. This tension is realized within the work, as the planes explode and morph, but they lack the impersonal chilliness of an electronic device’s interface — they seem too warm and human.

Referencing sublime landscape, Islamic Girih designs, technical and scientific illustrations, their work also evidences allusions to famous light studies in the Western canon. Monet’s sunrises and brushstrokes come to mind when viewing “The First One,” and in “Painting for New York,” the compressing quality of light, like that documented in Hockney’s Californian swimming pools, is alluded to. Looking at it, you sense clearly a point is being made, but it is inquisitive rather than didactic; it is not a point being made at you. The pieces are conversational rather than confrontational. Yet, despite its loveliness, the work feels somewhat derivative, as if it could have been realized out of the aspirations of the Bauhaus, or Concretism, or some of the later work from the Op Art movement.

The Green Building Gallery is exhibiting both their large- and small-scale paintings and drawings. The drawings aren’t as stunning as the paintings, but they show a pared down version of their process. The show is on display through the end of July, and with extended gallery hours on Fridays and Saturdays, there’s little reason not to escape the summer sun and expose yourself to a different kind of dazzling light.