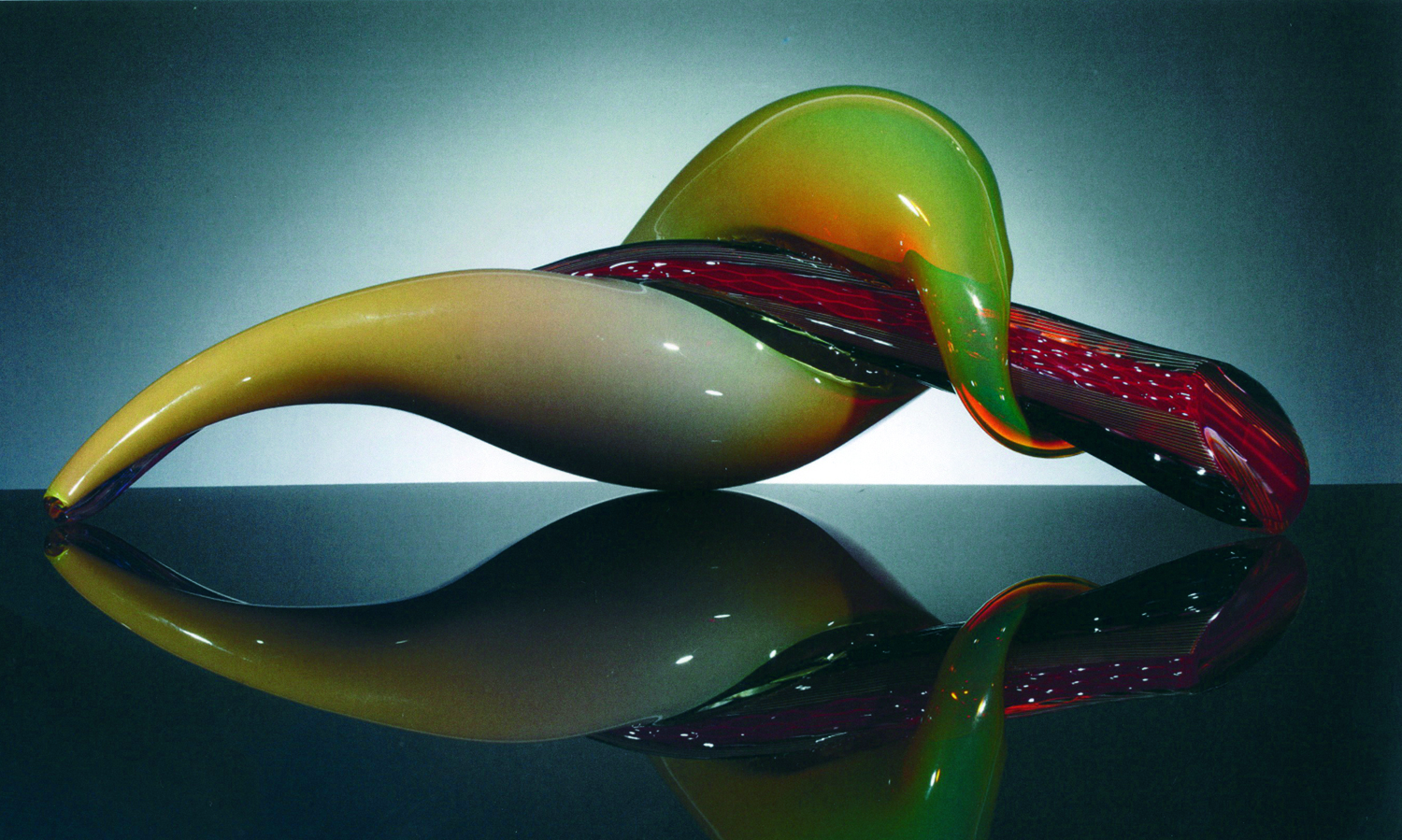 Instead of picking some isolated island, the next “Survivor” location should be in a glass hot shop.

Making art from glass is dangerous, expensive and laborious. Whether cut from colored panes, fired with a torch or shaped by human breath, glass is not for the timid. Yet legions of its followers have figured out how to heed the siren’s call and survive to tell the tale. The Kentucky Museum of Art and Craft’s exhibition “50 Years of Studio Glass” showcases examples of their creativity.

An important part of the history of glass is how industry tamed the fire that is necessary to keep the medium in a molten state. Factories were fitted with the huge furnaces that were needed to manufacture mass-produced glass for such items as light bulbs and jelly jars.

The art glass “eureka” year was 1962. That’s when artists Harvey Littleton and Dominick Labino developed a small furnace that led the way to what became known as the Studio Glass Movement. These furnaces let artists work outside of a factory on their own individual pieces. Attendees of the early workshops in Toledo, Ohio (called the industrial “glass center of the world”), became evangelists, spreading the gospel of personalized glass.

Fifty years later, many places around the world are celebrating studio glass, with at least 160 events in the United States (an additional anniversary show in town is at Flame Run at Glassworks). KMAC’s exhibition features more than 60 artists, from international stars like Dale Chihuly, Richard Marquis and Marvin Lipofsky, to local emerging artists such as Devyn Baron, Amy Pender and Jonathan Capps. KMAC is also showing the video “Pioneers of Studio Glass,” which is about the 1962 Toledo workshops.

Louisville is lucky that we have the necessary components to make our mark in glass: a university that teaches glass blowing as well as a commercial hot shop and gallery. Headed by Che Rhodes (U of L) and Brook F. White Jr. (Flame Run at Glassworks), they came out of Stephen Rolfe Powell’s Centre College hot glass program that began in the mid-1980s. This is a case of “all roads lead to Rome” — the “50 Years of Studio Glass” show highlights the art glass movement in Louisville, in Kentucky, and throughout the world.

KMAC is further expanding our knowledge of studio glass with three speakers. Fritz Dreisbach, artist and Studio Glass Movement historian, and art glass writer James Yood were recent lecturers. The last speaker, artist Laura Donefer, is scheduled to talk on Friday, June 1, at 7 p.m. during the First Friday Trolley Hop. Both Dreisbach and Donefer have works in the show.

Kentucky Museum of Art and Craft?