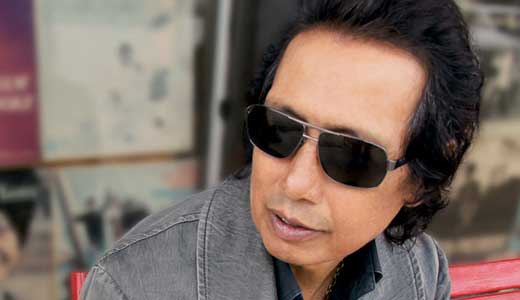 At 61, Alejandro Escovedo still looks and moves like a young rocker with something to prove, but he’s been kicking around for 35 years. From early punks The Nuns to the groundbreaking roots-rock bands Rank and File and True Believers, followed by two decades of influential solo work, Escovedo still seeks out new experiences.

For his latest album, Big Station (out June 5), he co-wrote songs with old pal Chuck Prophet in Baja, then went home to record them with producer Tony Visconti, best known for his 1970s work with David Bowie and T. Rex. Escovedo also recently received praise for performances with Bruce Springsteen.

LEO: How do you write with Chuck? Do you guys sit together in a room, or work individually?

Alejandro Escovedo: No, we sit in a room together. We go to visit each other, he comes to Texas or I go to San Francisco. We work pretty hard, we have a lot of fun doing it. I’ve been writing with him since (2008 album) Real Animal, and this is our third record together.

LEO: What about Tony Visconti? Some of his best-known productions are fairly grandiose, but you’re more of a street-level guy.

AE: Yeah … it’s really easy to work with Tony. We’ve done three albums now, and he’s become part of the band, pretty much. I think we work very well together, I think the combination is great because … I mean, he brings such a vast musical vocabulary and history with him — those are the kind of records I still listen to and have listened to all my life. I feel very comfortable with him, the way we both bring really great things out in each other. I love working with Tony, and I hope to make many more records with Tony.

LEO: We’re in an election year, so with this new album coming out, there’s some songs you wrote about your heritage and border issues. Were you consciously thinking about the ugliness of the political world, like some of the problems in Texas and Arizona?

AE: You know, when Chuck and I sat down to write this album, we knew that it was going to be about … observing the world, rather than writing about what was internal; more about the world around us. Chuck and I went down to Mexico to write, so there were a lot of things that we saw down there that we wanted to write about. As a result, we wrote “Sally Was a Cop,” “Can’t Make Me Run,” “Bottom of the World,” songs like that. It was a result of that experience.

LEO: Were you in a beautiful beach area or a poor rural area?

AE: : Well, it’s both. It’s all there. It’s beautiful. But it’s sad to see how intimidated people have become as a result of the violence and everything.

LEO: You got a lot of good attention at South by Southwest in March. What’s it like having that extra Bruce spotlight shine down on you?

AE: Well, you know, it’s wonderful. He’s a great guy, a very generous man, he’s very cool. I just like playing with him. It’s all very, very good for me.

LEO: Did you know each other before you hooked up with his management team?

AE: No, I didn’t know him. He picks the songs that are played before his concerts, and he used to play me — he even played Rank and File songs.

LEO: You’ve been to Louisville many times before and did some recording recently in Lexington. Why didn’t you record there again?

AE: Big Station we did in Austin, I wanted to come home and do it. I’m glad we made the record here … but I love Lexington, and that studio is amazing. Those two albums sound so good, and I really enjoyed the crew there and the experience there is amazing. I hope to go back and make another record there.