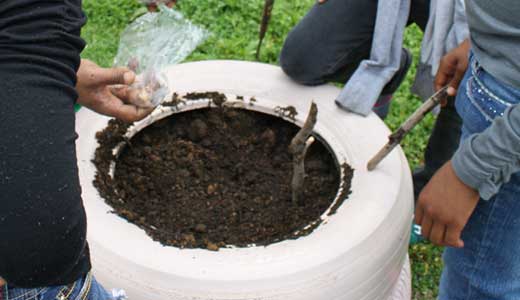 In between fits of spring rain, David Drummond leads a line of about 15 kids to a vacant gravel lot near 22nd Street and West Muhammad Ali Boulevard. The property, owned by neighboring Zion Baptist Church, sprouts an unruly stubble of weeds and grass. That will soon change.

It’s part of Drummond’s plan to turn illegal dumping into resourceful landscaping. He lives in this neighborhood and has witnessed west Louisville and Portland alleyways become disposal areas for unwanted junk, dilapidated furniture, and most plentifully, old tires.

He says it’s gotten worse over the last few years. So this past summer, he began collecting them, and in turn, kids have painted them pleasant, spring hues. On this Saturday afternoon, each tire gets rolled, stacked and stuffed with dirt for its new life as a raised bed.

“It’s a two-part thing,” Drummond says. “(We’re) trying to clean up the neighborhood, get the kids involved.”

Later in the spring, his youth group will plant vegetables available to the neighbors. For now, they use broken sticks to hollow out egg-sized holes. Bulbs plunge inside.

Drummond isn’t the only one to notice the surge in illegal dumping over the last few years.

“I get complaints about it,” says Metro Councilwoman Attica Scott, D-1. “I see it when I drive around the district, tires just piling up.”

Occasionally, a dam of garbage will crop up in an alley overnight. Of course, illegal dumping is a reality in any city, but a few factors may be worsening the matter. Tight budgets have trimmed junk pickup days. The foreclosure crisis of four years ago has contributed to Louisville’s roughly 7,000 vacant and abandoned properties, concentrated mostly in south and west Louisville.

“So no eyes in the homes to watch that you’re dumping,” Scott says.

On top of all that, Pete Flood says in the wake of a turbulent economy, more small, used tire shops have opened. He’s the compliance and enforcement officer in the Solid Waste Management division of Metro Public Works. Flood says it’s not uncommon for junk tires to pile up at these shops, and rather than pay roughly $2-$3 to properly dispense of each, shop owners will pay “middle men” a fraction of the cost to dispose of them.

A slideshow on the Metro Public Works website reveals dumpers in the act, scattering trash like birdseed. Cameras purchased by Metro in 2005 for about $6,000 each captured the pictures. Since then, though, only two people have been successfully prosecuted, Flood says. That’s because cameras must capture a license plate, meaning if it’s too far away, or if a driver has covered the plate, the footage is of little use.

Flood says the city needs better equipment. Three of the five motion-sensor cameras are worn out and not in use. Accessing pictures requires a bucket truck, making the process cumbersome. And by the time discs are downloaded, Flood says they’re often so full of images some have been recorded over.

He’s hoping to purchase up to 20 new cameras in the next few months with money from Metro Council members’ discretionary funds. The new cameras would cost about $3,000 each and have the capacity to send images to Flood’s office immediately via text or email.

“They’re cheaper but have many more functions,” says Flood, who has a list of a couple hundred requests for cameras in areas where dumping persists.

In an effort to curb the problem, Metro strengthened its penalties for illegal dumping earlier this year. If caught, the perpetrator would not only face a fine ranging from $200 to $1,500, but possibly vehicle impoundment for up to a year. Councilwoman Marianne Butler, D-15, was the primary sponsor of the bill. Her district, encompassing neighborhoods near Churchill Downs and Iroquois Park, is another hot spot.

“That’s nice that it has a little bite to it,” David Drummond says. “But that’s after you catch them … If you can’t catch them in action, they’re just tires in the street.”

Zion Baptist posted its own camera and has yet to successfully identify anyone. Drummond knows dumpers are fickle, targeting different places to stay off the radar. He’d like to see even more proactive legislation, perhaps a state or local financial incentive program for properly throwing out or recycling tires.

Currently, Louisville’s Waste Reduction Center will take up to four tires for free, but disposal costs kick in after that. The city’s Waste Management division also is working on a program with a local company that makes fuel out of tires in an effort to find free outlets for disposal.

For now, though, Drummond is relying on a green thumb and creativity to deal with the unwanted blight.

“Until we can find a legislative way to solve it, I guess the neighborhood will have to take it on and find a solution,” he says.

Nearby, kids play, tossing the rubber refuse back and forth. A few start icing them with white paint. Just then, another idea come to Drummond: “Tire swings.”