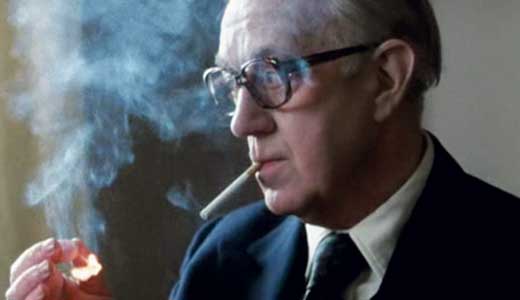 A fun little action/crime toss-off from Mark Wahlberg, who plays a veteran smuggler pulling off one last job to save his brother-in-law from slimy gangster Giovanni Ribisi. We’re not giving anything away by telling you it all goes to hell on the docks of Panama City in an explosive, slam-bang shoot-’em-up with lots of great stunts. Gangs of fun.

Now available on glorious and pristine Blu-ray, the great-granddaddy of all John le Carré Limey spy dramas, with Alec Guinness as George Smiley. This is BBC drama at its absolute best, with a world-weary and fragile-looking Obi-Wan called reluctantly back to service to ferret out a Russian spy within the British secret service. Quietly paced, and potentially suffocating if not for Guinness’ brilliant performance, it is nonetheless a deadly and shocking game of will and wits. This is how you fight a Cold War.

CHINA: IN THE SHADOW OF MR KONG

No, the “Mr. Kong” of the title is not King Kong, it is Kong Fu — Confucius to you — and his effect on human culture, which has been immeasurable, particularly in China. This five-part series tells the story of 2,000 years of Chinese culture, led by the teachings of Mr. Kong, which have remained all but unpolluted by the doctrines of Rome, whose culture-crushing conquests continue to this day. Visit the birthplace of democracy, silverware, most of the world’s great religions, song-based public education, figural art, the written word, and so much more.

The profoundly hot bikini body of Halle Berry stars in this hilariously contrived tale of swimming with sharks for fun and profit. Really! She plays a (snicker) “shark whisperer,” despondent after a companion is killed, who accepts a job from an old flame: take a thrill-seeking millionaire on a shark-dive. Without the cage. It’s just as ridiculous — and entertaining — as it sounds, and Halle has never looked better. Nice.

Brad Dourif is absolutely perfect as a suburban recluse who just happens to have a crematorium in his basement. He befriends Jeremy Sumpter (“Friday Night Lights”), an abused and fatherless 17-year-old who discovers the man’s secret hobby: Together they make the world a better place by systematically ridding the world of bullies … until the boy makes a mistake. Worth checking out.

This early Ross “Dinosaur Island” Hagen flick is terrible, just like all RH flicks — but in a good way. A soldier returns from “the war” and infiltrates the biker gang responsible for the death of his cop-brother. The best things about this movie are the beautiful biker chicks (one has an eye patch!) and the ’60s music by Somebody’s Chyldren and Davy Jones & the Dolphins, which has become something of a Holy Grail for ’60s vinyl collectors. Memorably riffed by MST3K; wonderfully bad.

One of the best-written indie dramas of recent vintage, and on a fascinating topic: religious cults. Heather Wallis (aka Heather del Rio), a member of a quiet fundamentalist sect, goes to work in a health-food store, where she meets two men: One the son of a preacher and a devout skeptic, the other a college dropout who finds televangelists to be great entertainment. Filmed partly in Southern Indiana.

The first complete Blu-ray release of arguably the greatest — and certainly most iconic — martial arts franchise in movie history. A savage former assassin, unable to bear the grief of his wife’s murder, pushes a baby carriage across the mountains of Japan to protect his only son from the hordes of evil-doers, shoguns, ninjas and otherworldly horrors who accost them. Your life is without meaning without this boxed set, which includes great bonus goodies from Samuel L. Jackson, Ric Meyers and Steve Watson.

Supposedly based on real events, this low-budget chiller is a major hoot, largely because of the presence of Cloris “Frau Blücher” Leachman. An 8-year-old is shipped off to spend a summer in the country with his grandparents in 1973, where late-night horror-film-loving grandma Cloris warns him to stay out of the cornfields. But does he listen? No, of course not; and what he finds there turns their quiet homestead into a nightmare. Great indie stuff.

Before his brutal murder in 1992, publisher Todd Loren had fought all the way to the Supreme Court over his right to sell a blistering line of unauthorized rock-star biographies in comic book form. Some of the subjects were delighted by his savagely perverse look at the decadence of life on the road, while others sued him. This long overdue bio-doc tells the tale, with lots of righteous indignation from Guns N’ Roses and pretty-boy hack Jon Bon Jovi, and high praise from others. Recommended.

“The Wicker Man” of 1973 stands as one of cinema’s best horror films, featuring Edward Woodward and Christopher Lee in iconic roles. This would-be sequel is engaging and finds Lee in good form again as “The Old Man.” A pair of virgin Christian missionaries come to Tressock, Scotland, to knock on doors, but the locals have profoundly more practical uses for them. Not in the same league as “Man,” but serviceable pagan horror with a good cast, including the irrepressible Honeysuckle Weeks.