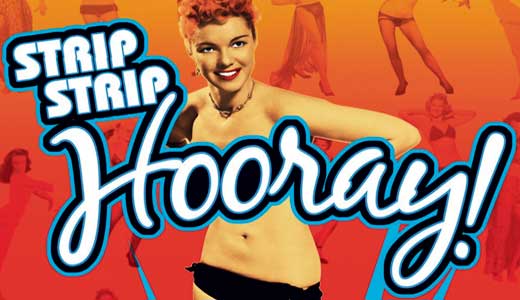 Re-release of a guilty pleasure of ours. This scruffy tale takes us into the heart of rural Texas for a night of romance, adventure, popcorn and crappy movie watching at the local passion pit. Stars no one you ever heard of coping with car crashes, rival gangs, morons, fights, cops, girls, robbers, jealous boyfriends, and so much more — while above it all plays “Disaster ’76” on the big screen. Directed by the legendary Rod Amateau, who brought us “Dobie Gillis” and “The George Burns Show.” “Well, SOMEbody’s got to rebuild Rio!” Our highest recommendation.

Boy, howdy! A sextet of mostly b&w burlesque movies from the late ’40s and early ’50s featuring the most famous names in the art. If you’ve never seen Sunny Knight, Gay Dawn, Val de Val or Ruby Lee, then you don’t know nuttin’ ’bout struttin’ yo’ nekkid naughties! And it’s all “topped off” by none other than Tempest Storm, The Girl with the Fabulous Front! A welcome walk though the lost world of grindhouse goodies; two discs, more than seven bumpin’, grindin’, dancin’, singin’ hours of beautiful women having fun. We think we’re in love.

60 MINUTES: JOY IN THE CONGO

Amid crushing poverty, endless civil war and rampant murder, rape, and disease rises the Kimbanguist Symphony Orchestra deep in the African Congo. A full-sized modern orchestra and chorus that performs all the classics — in their original German, French, etc. — despite the fact that nearly everyone is illiterate and a working musical instrument is considered priceless. And yet it exists and flourishes and performs with the most joyous sound you can imagine. (We should send our Louisville Orchestra Board there. One way.) Simply in-freakin’-credible. A must-see.

We don’t normally mention sports vids, but this one is dear to our hearts: A compilation of vintage newsreel footage featuring such greats as Babe Ruth, Willie Mays, Lou Gehrig, Wilt Chamberlain and local legends Johnny Unitas and Muhammad Ali. Perfect.

A trio of perfectly matched dark comedies for a great price — and on Blu-ray! The first is, arguably, Michael Keaton’s best film, the second a favorite from Gene Wilder, and the third a vastly underrated piece from Tim Burton. (Also available: a Blu-ray trio of Mel Brooks’ hilarious “Blazing Saddles,” Chevy Chase in “Caddyshack,” and National Lampoon’s “European Vacation.”)

GHOST STORY AKA CIRCLE OF FEAR: THE COMPLETE FIRST SEASON

Horror movie master William Castle — the man who gave us “The Tingler,” ballyhoo and Emerge-O — made this little-known foray into anthology TV back in 1972, hoping it would become the next “Alfred Hitchcock Presents.” Only one season exists, hosted by Sebastian Cabot, who usually introduced the characters and plot from within his spooky mansion. Twenty-three hour-long episodes featuring Jason Robards, Jodie Foster, Angie Dickinson, Martin Sheen, Stella Stevens, Karen Black, Rip Torn, Carolyn Jones, and many, many more. Recommended.

This sappy gospel-infused comedy is just an excuse to put Queen Latifah and Dolly Parton in front of the camera and let them have at it. Lots and lots of righteous sounds by both (and some surprise guests, including Kris Kristofferson) get bogged down in silly side plots. Fast-forward through those and just dig the music for a joyous, uplifting bit of nonsense. It’s been stuck in our heads now for a week!

“Mimic” distinguished itself by being the first English-language film by the great Guillermo del Toro, and because it made us wet our pants; Mira Sorvino, Charles S. Dutton and Josh Brolin co-star behind an army of giant mutant cockroaches. Seriously cool. The sequels, “Mimic 2” and “Mimic 3: Sentinel,” are both worthy successors, if lacking del Toro’s genius, with terrific special effects, action, terror, and just enough gore to keep you from getting another beer. Three great films on Blu-ray for one seriously cheap price.

If you are a fan of Christina “Married With Children” Applegate — and who isn’t? — and you missed this short-lived ABC sitcom, don’t make the same mistake again. She wakes up one day to discover she’s been in a coma and can’t remember a thing about herself; but her amnesia may be a blessing, since everyone agrees that she used to be a bitch. Her attempts to live a better life are fun, heartfelt and funny. We miss this show; now on Blu-ray.

Directed by “Madonna” Louise Ciccone, this big-budget Limey biopic tells the tale of Edward VIII (James D’Arcy), who abdicated the British throne in 1936 to be with his true love, American divorcee Wallis Simpson (Andrea Riseborough). Rather than a straight-up telling like we saw in “The King’s Speech,” this is done in parallel flashbacks from the point of view of Abbie Cornish (“Sucker Punch”), a woman taking part in a 1990s auction of royal doodads.