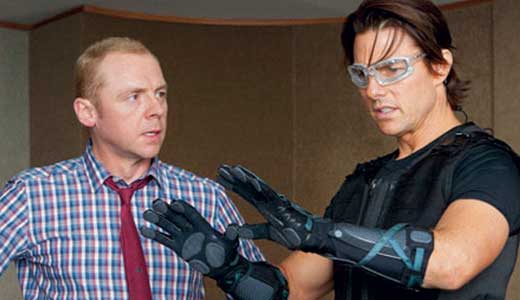 It’s a far, far more mature Tom Cruise at the helm of this fourth installment of the MI franchise. You can see it in the painful stunts, the way he relates to his MI crew, and the freedom he gives the other actors. Yep, TC may be turning 50, but he attacks this mission with the same zest he’s always had, whether he’s dangling from the world’s tallest (and slipperiest) building, racing through a sandstorm, or dealing with the comic failures of tech-wizard Simon Pegg. The plot, something to do with nuclear launch codes, is just an excuse for the usual frenetic action — which is not a bad thing! A welcome addition to the canon.

There was a lot of Oscar controversy over this film, largely because star Michael Fassbender (and, too-briefly, co-star Carey Mulligan) spends so much of the movie nekkid and sweaty with the lights on, earning it the dreaded NC-17 rating. But despite all the wonderful skin and lubricants on display, this is a lonely and unpleasant film, which is probably the point. A dark character study of the relationship between an out-of-control sex addict and his sister, who unexpectedly moves into his apartment, cramping his sex-hunts.

Local boy Ned Beatty is most often recognized from “Deliverance,” but this is our pick for his best flick. A raw and unsentimental look at undocumented Mexican farm workers, made 35 years before the issue became a GOP hot button. Domingo Ambriz stars as a man who wants to work in the fields of California, with Beatty in a small role as the “Anglo Coyote”: an American who rounds up scores of cheap laborers in Mexico and drives them across the border like cattle. Now available in a perfect Blu-ray Criterion release.

A downright scary trip through the musical mindstorm of Ministry, the proto-industrial metal band, founded by Al Jourgensen, that launched/inspired a generation of musicians, including Trent Reznor (Nine Inch Nails), Jonathan Davis (Korn), Dave Navarro (Jane’s Addiction/Red Hot Chili Peppers) and Maynard Keenan (Tool) — all of whom appear in this impossible-to-categorize flick. Includes a CD by Paul Barker. The band, which broke up in 2008, has announced an August reunion concert in Germany and just released a new album.

A joyous and unpredictable doc/thriller about WWII counterspy Juan Pujol Garcia, who quite literally changed the course of history (including your life!) by simply being very, very clever. Unlike any doc we’ve ever seen, this one tries to keep the viewer off-balance, with clips of real newsreels intercut with cheezy spy movies to explain how Garcia succeeded in infiltrating Axis strongholds. Trust us, this is one of the best docs you’ll ever see.

It’s surprising how well this otherwise run-of-the-mill reality series has hung on, documenting the annual high-speed runs of equipment and supplies across treacherous, frozen tundra during the brief window before the Arctic road literally melts into the sea. We think the fantasy of driving hell-bent, like your life depends on it (which it does), is a big part of the show’s charm, but the real-life characters and their century-old back-stories are also very engaging. A guilty pleasure of ours.

IMAX: BORN TO BE WILD

Available in 3-D, this big-budget documentary on animal rescue and rehabilitation is flawless, from the narration by Morgan Freeman to the stunning visuals to the heartbreaking tales of people who have devoted their lives to helping animals. Two of the most memorable are Daphne Sheldrick, who wears pearls while feeding orphaned elephants at her Kenyan facility, and Biruté Galdikas, who fills the role of a mother orangutan that was killed by the loss of Bornean rain forests. Recommended.

This four-disc, 11-hour British documentary series on Winston Churchill’s WWII intelligence operation is a mind-blower. Part spy thriller, part history and part roll-call of unlikely heroes, it follows the actions of the British Special Operations Executive (“SOE”), a super-secret organization that sent spies across the world to, as Churchill demanded, “set Europe ablaze.” Includes a look at “Agent Garbo,” who is credited with saving D-Day, and Royal fashion designer Hardy Amies, a gay spy for Her Majesty and expert in “no-rules warfare.” Incredible.

Every time we get one of these “Shaun the Sheep” vids, we stop whatever we’re doing and sit in front of the TV like 4-year-olds, laughing and cheering. We should be ashamed, but we’re not. In this set, Shaun must suppress those dastardly pigs — who have decided to take over the entire farm! Then he falls for a beautiful stranger before capping things off with a ride in a runaway hot air balloon. Come join in the fun!

An amazing cast raises this end-of-world shocker head-and-shoulders above what has become a very dismal and undistinguished genre. Lauren German, Michael Biehn, Milo Ventimiglia, Courtney B. Vance and Rosanna Arquette are part of a pack of panicky survivors in the basement of an apartment building after a nuclear attack. But the real threat to the survival of the human race isn’t radiation, starvation or thirst. It’s us. As Sartre said, “Hell is other people.” Ain’t it the truth. Disturbing.

This dumb C. Thomas Howell movie is just what you’ve come to expect from him: A brain-damaged vet sets off a homemade bio-weapon in a federal building to expose the government’s secret efforts to create a zombie army. Low-budget serio-comic hijinx with lots of guest stars, including Jason London, Judd Nelson, Robert Carradine, Lochlyn Munro and Alicia Leigh Willis from “The L Word.” Dumb fun.