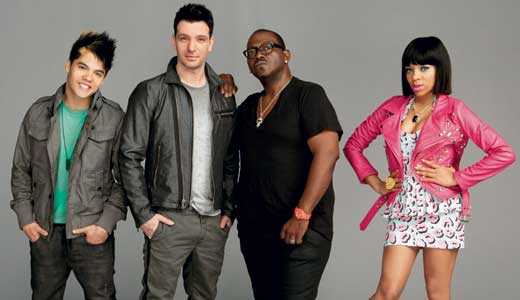 Now entering its seventh season, MTV’s street-dance competition, “America’s Best Dance Crew,” has kept a mostly stable cast, with host Mario Lopez and regular judges J.C. Chasez, the former ’N Sync singer, and Lil Mama, the young rapper, in place from the beginning. Now in his second season on the judging panel, dancer Dominic “D-Trix” Sandoval has an especially unique perspective on what it takes to win, having earned the title three years ago with his group, Quest Crew.

“It’s something I take very seriously, because I come from that same world,” he tells LEO. “I care a lot about all the dancers; seeing them onstage reminds me of when I used to be on there, and how much it meant to me to win the show … At the same time, I have a lot of fun with it.”

D-Trix, whose outgoing, goofy personality works well for television, has also competed on Fox’s “So You Think You Can Dance,” standing out for his flirtatious banter with host Cat Deely. It was only after he began entering TV competitions that D-Trix, self-taught as a hip-hop-inspired b-boy dancer, realized his ambitions went beyond being merely the coolest guy in the streets.

“I took b-boying seriously until ‘So You Think You Can Dance’ — that’s what changed my mind. I wanted to be an overall dancer. With that, I trained a lot, both as an individual and with a crew, and I just fell in love with dance in general. I think that’s really helped me get to where I’m at today, being able to judge dancers, ’cause I’ve studied. By being a street dancer, I can vouch for people on the show, and it’s all gone hand-in-hand. I never thought I’d be at this point.”

He continues to take classes in various forms of dance, going back to explore the roots of each style, while also expanding his performing skills on the YouTube channel YTF. The YTF group, a collective of comedians, singers and dancers who met after becoming YouTube mini-stars, is what D-Trix today calls his main job.

“We’re a bunch of friends, just hanging out, making dumb videos, and we’ve created a fan base online. With that, we want to spread the message of what YTF means to us, by touring and continuing to put out content. YTF is a group of friends who love being nerds online,” he laughs. “I think over the last year and a half, I haven’t really danced at all. I’ve been mostly just creating for YouTube, and, for me, my future is online.”

D-Trix acknowledges that a show like “Dance Crew,” which predominantly features young African-American and Asian-American street dancers, is a harder sell to mainstream America than a more traditional, faux-celebrity-driven dance program on a bigger network.

“It’s a sad thing. It’s probably because of the network, and who they cast on the show. It’s mostly an urban audience, and kids and teenagers, and it’s a very positive thing. It’s good for crews all over the world, and we stay off of the streets because we have crews and we dance. If people can understand that, they can appreciate it a little bit more.”

Dance crew Fanny Pak, a favorite from last year, is returning this season, the first defeated crew allowed to try again. “It’s amazing!” says D-Trix. “They want it really bad, and that’s the main reason why they did come back, they felt — and a lot of people felt — that they went home too early, and they’re back for redemption.”

So who will win?

“That’s a tough one. I don’t really have that answer yet … It seems like a choreography team will win this. It might not be a crew that has crazy stunts, because, the first night, choreography alone was the most memorable. I think that’s a good thing — I think America needs to know that dancing isn’t always a double back-flip off the stage. And I’m a tricker, so for me to say that — I believe in crazy, dope stunts and crazy moments, but if you can blow people away with your choreography, that’s saying something else.

“But, that could change next week. You never know. That’s what’s amazing about this season is, you don’t know.”