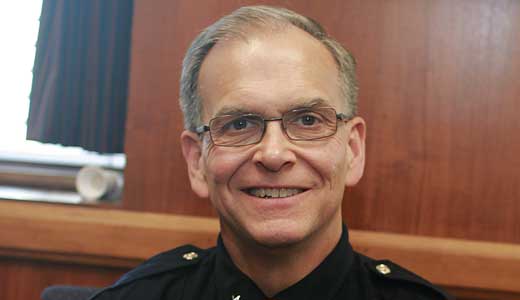 At the end of his second week on the job, Chief Steve Conrad sits down and states he doesn’t have a plan. But the Louisville native says that’s intentional. Conrad feels it would be disingenuous to arrive back in town after six years away with a cache of crime-busting answers, like some brash, square-jawed lawman carved from comic books.

He says he’ll spend the next few months bundling concerns. From community meetings to monthly sessions with union leadership, Conrad’s master’s degree in community development is reflected in his thoughts on how to improve safety, including engaging residents in the process. He’s imparted upon rotary luncheons and reporters the need for neighbors to watch out for each other and themselves. For instance, always locking your home and car.

Conrad started his career in 1980 as a Louisville patrol officer, rising through the ranks, eventually becoming assistant chief in both the former Louisville Police Department and LMPD. In 2005, he moved, assuming the chief position in Glendale, Ariz. He’s thrilled to be back, saying he greatly missed Heine Brothers Coffee, the Highlands and LEO (it’s true, he said that).

LEO: You’ve talked a lot about how you want to make Louisville the “safest city” in America. With 54 homicides last year, almost 200 shootings and tight budgets, how do you achieve that? A lot of times, those promises can seem kind of gimmicky.

Steve Conrad: Well, I think No. 1, it’s not a promise. I’m not running for office. It is a goal. And I think that we make improvement by setting lofty goals … I’ve challenged the men and women who work at this department to come up with ways to make our city safer … More specifically, about things that we need to be doing.

The Metro Police Department does a good job here of analyzing crime. We use that crime analysis to figure out when and where that crime is occurring. We need to look at ways to take that to the next level in terms of trying to identify the most active criminals in our community … 10 percent of the active criminals in any given community are going to be responsible for 55-60 percent of the crimes going on. So the challenge for law enforcement is to identify those active 10 percenters … If you can identify and arrest those people, you can have a significant impact on the amount of crime going on in our community.

LEO: Do you think Louisville has a gang problem that needs to be addressed? And are there any thoughts about bringing back a gang unit focused on the issue?

SC: We have gang problems in our community. We have people who are committing crimes together for the benefit of the group. And what I’ve described is a criminal syndicate … But it’s not like 20 years ago or 30 years ago when we all watched the movie “Colors.” Gangs aren’t out there wearing blue and red necessarily. They’ve morphed into sophisticated criminals who are committing crimes, whether it’s dealing narcotics or involvement in some other criminal enterprise … In terms of a gang unit, per se, we already have a narcotics intelligence unit that’s working to gather information about people involved in narcotics trafficking, people that are involved in violent crime. And if there’s a gang connection or gang involvement, we have the ability to gather that information, to analyze that information, and then disseminate it back to our officers.

LEO: The city is dealing with a large quantity of vacant and abandoned properties, about 7,000 at last count, many clustered in certain neighborhoods. How does that contribute to crime? Or do you feel that it does?

SC: I absolutely feel that it does. And coming from Glendale, which is in the middle of the metropolitan Phoenix area … Arizona and Nevada were two of the hardest-hit states in terms of foreclosures. And the number of vacant homes is even larger there than it is in the Louisville Metropolitan area. There we saw problems, and I assume the same problems are occurring here … The homes would be stripped of not just metals, but cabinets, ceiling fans, air conditioners … If they’re not kept secure, you’re going to have a place where people can get in it, get out of sight, commit crimes.

LEO: The issue of low morale in the department has been discussed. Do you have any plans on how you can boost morale?

SC: Morale is a tough issue. I’ve been in law enforcement for over 32 years … I think for the most part your immediate supervisor tends to have more to do with your morale than the chief ever does. If you’re a patrol officer, it’s your sergeant who determines whether you can have a vacation day Saturday so you can watch the U of L game. It is your sergeant who is making a decision whether he or she is going to accept the excuse that you’re sick when I didn’t give you the vacation day and now you’re sick on Saturday night. I think what our officers are looking for in a chief is … somebody who explains where we’re going as an organization … That (was) one of the frustrating things for me growing up in the police department, is seeing things coming out of the chief’s office and not necessarily agreeing or disagreeing with it, but not understanding why we were doing it.

LEO: Earlier you were talking about the very small percentage of the population that’s responsible for a large percentage of the crime. What do you think the police department can do to help juveniles that may be prone to fall into that pattern of adult criminal activity?

SC: I think we can do a couple of different things that might be beneficial, like creating or finding opportunities where officers can interact with kids in non-threatening environments. I mean, so often the interactions that kids have with officers are out on the street … and they don’t’ have the opportunity to get to know the officer and the officer to get to know them. Having officers interact with them in their schools, in parks, in community centers may be some way to allow for that interaction. One of the ideas that we had talked about in Glendale, and we just didn’t have the opportunity to make it happen, and it’s something I’ve already talked about a bit here, is the potential in different neighborhoods to do some sort of youth summit.

LEO: Do you think it will be easier or harder to be chief in your hometown?

SC: I think being a police chief in any community is a true honor … It is truly an opportunity, but opportunities in life always come with risks and what needs to drive you and drive your decision making needs to be your personal values and our department values … No matter where you’re the police chief, you’re going to potentially have challenges, and the thing that we all need to do is just do our best every day, try to do our best for this community, try to do what’s best for the men and women who work in this department, and just try to do the right thing.