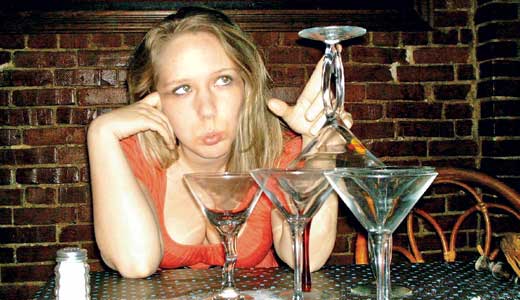 The best jokes contain the most truth. A robber enters a bank only to find that another has already held the place up, and they argue while the teller plays with her nails instead of calling the cops. Silly and unlikely, of course, but isn’t life full of poor timing, jumping to conclusions and surprise endings? In Finnigan’s fifth “Festival of Funky Fresh Fun,” 10 playwrights have created captivating and overwhelmingly funny little nuggets of theater, performed and directed by locals, many of whom have previously graced the Finnigan stage.

Watching the festival at its new Highlands home still feels a bit crowded and awkward, but I’d still prefer this intimate lounge environment over a traditional theater setting. It just fits.

Many of this year’s pieces feature a wouldn’t-it-be-crazy-if plot base, lots of F-words and a few dick jokes, making it seem more like a comedy sketch show; but deeper pieces like Tad Chitwood’s “Toast” and the brief monologues between scenes help break up the romp. These little interludes, which are all true accounts on the same subject, are a nice addition to the festival and give the audience something to watch while the cast scrambles to change sets.

David Clark’s “Chocolate Girl” kicks off the show, telling the story of a chocolate addict and a one-night stand turned ugly. Various kinds of therapy sessions take place in Sarah East’s “On Call Empathy Team,” Mitch Fields’ “Life is But a Dream,” and Brian Walker’s hysterical (and kind of scary) “Women Who Love Gay Men,” all of which creatively comment on our obsession with trying to make ourselves feel better.

“PlayList,” by Kate Barry, uses music to get inside the head of a barista distracted from her mundane work by her crippling crush on her co-worker. Zachary Burrell’s “Stick-Up” was like something out of Woody Allen’s “Take the Money and Run,” with a bank robbery gone awry. “Nick and Corey Grave Rob” sounds like it would follow a similar plot, but not exactly — and if you’ve seen Nick Potter and Corey Music’s “Hell’s Awesome” or “The Spy and the Playwright,” you will recognize their specific sense of humor.

Andy Epstein’s “Greek Tragedy” is particularly clever and will be appreciated by anyone who’s ever studied classical theater. The use of the traditional Greek chorus in this piece (directed by Joe Hatfield) was spectacular — the choreography was perfect and their masks were delightfully creepy. Finally, Bryce Woodard’s “Death Hamster” wraps up the show and was almost too much, but then again, I don’t think anything is too crazy for the Finnigan Fest. They’re not afraid to go overboard, and they know how to pull it off.

The entire cast was strong, worked well together and impressively jumped around from different (bizarre) characters, but the actors who truly shined this year were Elizabeth Cox, with the most impressive range of roles, Craig Nolan Highley, Jordan Kelch, Abby Braun and Corey Long, who were all solid and honest. The lovable Michael Roberts and Meg Caudill were great as well, and Eric Welch grabbed lots of laughs by randomly popping up and disappearing.