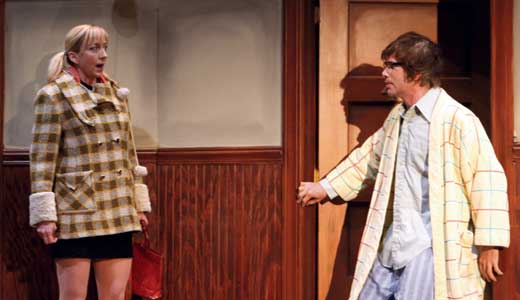 “The Ten-Minute Plays” are a staple of the Humana Festival, and 2012’s three offerings show what can be accomplished in the format. Something needs to happen, but better to not bite off nuclear armageddon.

In “The Dungeons and the Dragons,” rural teens act out a fantasy: It’s fun, and they’re much more powerful here than in their real lives. Interlocutor Brett (Jordan Brodess) is drunk on power; when Jean Verlaine (Sean Mellott) addresses Marlin Bricks (Sarah Grodsky) out of character, he declares Jean has lost an eye.

Then there’s Felicity Hydrangea Karmikal (Trent Stork), who enters on skates, all pink and purple sparkles. Felicity is an “onyx wizard” here, but in life, bullies are hassling him big-time. As the kids contemplate an ambiguous goat off in the distance, Felicity calls time-out because the real-world rednecks are outside smashing the disco ball hood ornament on his dad’s car.

Brett insists Felicity has left the game, but when Felicity tells his friends he is “shitty and ruined,” they relent. It’s a sweet gesture, and Felicity constructs a closing narrative in which they “fly to a place of feathers” where “everyone is as nice as she is.” For a moment, we forget Felicity’s dad is going to kick his ass.

Things are equally tense in “Hero Dad,” which focuses on three separate male-female-child interactions. First, a woman (Kate Arrington, who plays all three women, each unnamed) on the eve of her bar exam complains about a noisy kid next door. Vincent (William Connell) rationalizes his unneighborly attitude — his baby mama lives out of state and he gets the youngster two weeks a year.

Next, Billy (Alex Moggridge) apologizes to a jogger after his kid chucks a ball at her. He, too, is an occasional dad, and his clumsy discourse — he asks her to help calm the kid, then hits on her — explains why he’s coming up short in life.

Finally, Mike (Mike DiSalvo) implores the woman carrying his child not to go through with an abortion. She lays it out: You’re not up to the task, and that’s not fair to an innocent child.

Collectively, the stories are a pointed indictment of men (of any age) who can’t change enough to understand, much less meet, their real obligations.

Based on Shakespeare’s 23rd sonnet, “The Ballad of 423 and 424” is set in the hallway of an apartment building. Ellen (Kate Eastwood Norris) has just moved into No. 424 and tries to get to know Roderick (David Barlow) in 423. He’s a famous author, but beyond weird and apparently socially phobic. Their courtship is odd — he makes her coffee each morning and hands it to her in the hallway. She knocks on his door and he barks as if his apartment is full of dogs — his excuse for not letting her in.

Eventually, he loses his bathrobe for a suit. After several false starts, he knocks on her door and hands her his latest book, which he’s dedicated to her. She invites him in for dinner and he accepts — but insists the door remain open in case he needs to make a quick escape.

It’s wacky and good fun, and shows how even accomplished people must overcome their fears — and what good things can happen when they do.