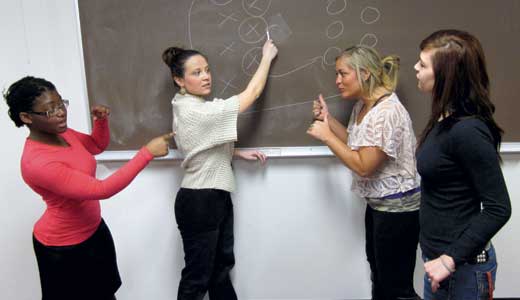 U of L Theatre @ Thrust Theatre

Lisa Simon loves her children. She loves them so much that she lets them draw all over her artistic livelihood when she’s finished. The resulting jumble of classical sketches and juvenile scribbles, entitled “Stratiform,” is not a fiasco, but rather a collaboration in which both mother and child can be perceived with equal intensity. She and fellow artist Kevin Lippy share space for their exhibits at Galerie Hertz. Perhaps better known for his digital graphics-heavy advertising career at Two Guys Freelancing, Lippy drops his MacBook and picks up a more traditional tool — a paintbrush — for this show. His love for his hometown is evident; in his “Urban Landscapes” series, he serves up hot and candid “slices in time,” all captured in downtown Louisville. —Simon Isham

The opportunity to see a true virtuoso in Louisville only comes around every few years; even when it does, it’s usually someone that only people well versed in classical music would recognize. Joshua Bell is (nearly) a household name. He arrives here as the music director of the Academy of St. Martin in the Fields, one of the most internationally renowned chamber orchestras. They are also one of the most recorded, having played the soundtracks for such movies as “Amadeus,” “The English Patient” and “Titanic.” The Academy, a 25-member group of accomplished musicians, is itself unique in that it works entirely without the direction of a conductor. Instead, the orchestra will accompany soloist Bell. The program lineup features nothing but Beethoven, to be played in the astounding acoustic environment of the Kentucky Center’s Whitney Hall. —Simon Isham

A university is in danger of being taken over by a nasty corporate sponsor, and the only way the students can save it is by winning a game they are unprepared for, facing corporate ogre Big Sweety, a pop star and a superhero version of Tom Brady. This original sports-themed play was written by students in Amy Steiger’s ensemble performance and community-based arts class last spring; once they decided on the subject, they were turned loose in the city to collect information. Their play, though quite fictional, grew from actual interviews with sports fans all around Louisville, focusing on how sports impact the university and community. “Theater is a social force,” Steiger says. “Community-based plays create civic engagement and connect the arts and the public around areas of common interest.” —Jane Mattingly

From New Orleans, home of the occasional unplanned disaster, came Crowbar, a sludge metal band with a name that summarizes their approach to music. Traveling down similar paths as the Melvins, Pantera and early Soundgarden, as well as interconnected neighbor bands Eyehategod and Down, these gnarly dudes have unleashed heavy records such as Obedience Thru Suffering and Time Heals Nothing since 1992, demonstrating the focus of their particular perspective, and 2011’s Sever the Wicked Hand continues their assault. Co-headliners Prong have a new album out this month, Carved Into Stone, a more New York/industrial approach to intensity that is also more ass-shakin’. If you thought their best days were behind them, they will prove you wrong. Also with Witchburn, Eye Empire and Maltese Cross. —Peter Berkowitz

So the folks at Le Petomane Theatre Ensemble are letting the horse out of the bag on how we really feel about Derby. Sure, from the outside, we are a welcoming bunch of polite Southerners who give up our tables, barstools and roadways to tourists excited to lose their money on animal racing. But under our breath, we curse these meddling interlopers. “A Derby Carol” is Le Petomane’s comic meditation on what really goes down the first Saturday in May. They’ll take on the sacred traditions — perhaps a stab at “My Old Kentucky Home”? — and the ridiculousness of it all — the Infield, ’nuff said. Tickets are on a sliding $8-$20 scale, so make your way over to The Bard’s Town and be prepared to laugh at yourself and your neighbors. —Sara Havens

Unikids, a local charity that collects art supplies for needy children, and Local Art in the Highlands, a coalition of artists, are teaming up for a charity art auction to raise money to provide school supplies for orphanages and underprivileged families in developing countries. Local artists have donated some 30 original works in a variety of media to the auction, and the money raised will fund this charitable effort. Local Art in the Highlands was created by Sandie Griffin and Kim Torres of Lucent Dreams Photography in partnership with St. Andrew’s Church, while Unikids was founded locally by Senait Mareligne. In addition to the auction, each donating artist will have a booth with original works for sale, and there will be a cash bar and live music by Jonny Sands. —Kevin Gibson

‘The Roast of Hitler’

The Young, Dumb and Full of Comedy crew is at it again. This time, they’re bringing their fury down on the fuehrer. Yep, they’re roasting Hitler. In dishonor of history’s most hated man’s 123rd birthday, the comics and The Bard’s Town will give him their worst. Emcee Tyler Jackson will oversee the dais of historical figures, like Eva Braun, Anne Frank and, well … of course, the much-maligned man on the hot seat, old Adolf himself. It’s hard to imagine a scenario where this won’t be hilariously offensive to everyone on some level. “The Roast of Hitler” is a show that the easily offended and children should probably avoid. —Brent Owen

James McMurtry is a singer-songwriter from Texas renowned for his ability to lyrically capture the depth and breadth of any situation. His capacity for arranging words was passed down to him from his parents — his mother was an English teacher, his father a novelist. His storytelling style, in which he assumes a character’s identity for the duration of a longish song, stems from brief stints as an actor in his younger years. On two albums, McMurtry collaborates with his baritone sax-playing son, who is “tough to work with, because he knows a little bit more about what he’s doing than I do,” he jokes. McMurtry is often heard on Kentucky airwaves, notably as a perennial favorite of WFPK, and McMurtry and backing band The Heartless Bastards are established regular performers at The Continental Club in their Austin hometown. —Simon Isham

Do you have a friend who tells more stories than he buys rounds? Make him pay his dues and drag him to Moth Storyslam at Headliners Tuesday. The Moth is a nonprofit organization dedicated to the craft of storytelling (so don’t let him have too many beers before). Each show features 10 people (drawn from a hat) who get up on stage and tell stories that fit the theme of the night. Each contestant only has five minutes to artfully articulate a beginning, middle and end — and make it entertaining. Three teams of judges, selected from the audience, determine a winner. It’s highly entertaining to watch the good, the bad, and the ugly. Tuesday’s theme is Derby. This should be interesting. —Sara Havens

The nasty viruses that sometimes emerge just as we make plans to attend Derby festivities rear their ugly, symmetrical head as Barry Motes puts sickliness in the backdrop of “Virus Paintings.” Invisible and deadly diseases are magnified to provide a bold surface on which Motes superimposes people opposite ancient text from cultures long forgotten. “The portraits are people who have been ‘solarized’ to convey the psychological state of those living in a technological and catastrophic age,” he says. Motes shares his time at Faulkner Gallery with Linda Akers, a local folk artist who enjoys her abstract genre using bright palettes. “I intrigue my viewer with whimsical portrayals of humanity and environment,” Akers explains about “Head Travels.” Her current project highlights common emotions and experiences happily. —Allison Ray

It’s not often that a proprietor gives some of his personal collection to an artist, then anxiously awaits the artist’s return so the work can be displayed in his establishment. That’s exactly what Andrew Hudson, owner of the sustainable design studio Hudson Home, did with artistic storyteller Kiki McDonald. The result is an exhibition of new assemblage collages. “Kiki and I bonded over our design sensibility,” says Hudson, “so it made sense to offer up part of my own collection of ephemera and objects for her to use. Some of the pieces have been floating around in my life for over 20 years. It was time for them to be put to good use.” McDonald says the collages are “quirky, sometimes funny and a little dark — kind of like me.” —Jo Anne Triplett

The cooperative gallery that is Zephyr has a roster of artists with a full range of creative ideas. Their current exhibition features paintings: acrylic on canvas by Deborah Thomas and oil on board by Sharon Weis. “This body of work is about reclamations, both of materials and ideas,” says Thomas. “My inspiration has always been, and continues to be, the organic shapes and colors of the natural environment.” Weis has two groups on display. Her bird paintings reflect on “the patterning in each bird (that) represents the individual variation within us all, evoking the idea of heredity,” she says. Her love of the Louisville Metro park system inspired the series of paintings she calls “parkscapes.” “They are entrenched in my earliest memories and where I go to put miles on my feet.” —Jo Anne Triplett