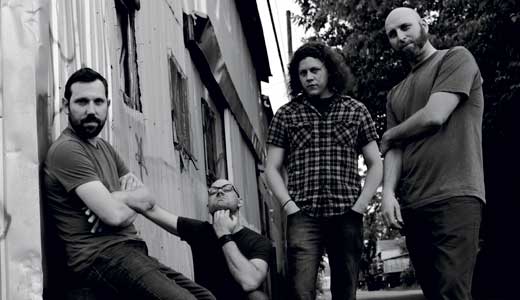 Noir-inspired, ethereal rock band Seluah broke up early in the Bush era, leaving only one popular EP behind. They reunited in 2010, and, after an almost Axl Rose-esque wait, Seluah has finally delivered their debut full-length album, Red Parole, through local label Karate Body Records. It’s about as far from Chinese Democracy as one could ask: smart, intense, moving, full of memorable riffs and grooves, and well worth the wait. They celebrate with a Friday performance at WFPK’s “Live Lunch,” at U of L’s Red Barn, and with a nighttime show at Zanzabar on Sunday. LEO caught up with guitarist Andrew Killmeier.

LEO: The EP was released in October 2002. What have the guys been doing since then?

Andrew Killmeier: We split up when I moved to Los Angeles in 2004. I was there for six years working in the film industry, not playing any music. I moved back to Louisville a year and a half ago after the economy went to hell, and we just started playing together again without even really discussing it — just picked up where we left off, so to speak.

LEO: Reviews of the first EP often cite trip-hop, shoegaze and similar aspects, but the new album has more heavy guitar riffs. How has the sound shifted, and what inspired those changes?

AK: The simplest explanation is that I used to play a lot more keyboard and sampler in the old Seluah. When we got back together, I basically told the other guys to shove the synth up their asses; I was going back to the guitar with a vengeance. I still play both guitar and keys, but the balance has certainly shifted toward the dark side of the six-string. I’m older and more ornery than I used to be.

LEO: The band is notably cinematic in sound and scope. How have movies influenced the music?

AK: We all love fine cinema — and some lousy cinema as well. We’ve always paid attention to great scores and composers of film music — in particular, Angelo Badalamenti, Bernard Hermann, Cliff Martinez and Ennio Morricone. Sometimes a narrative element is necessary in music, and Red Parole is certainly a noir album. If I had to think about it, I’d say we approach our work from an atmospheric element, as opposed to setting out to “write a song,” though we aren’t particularly deliberate in anything we do. Everything is permitted.

LEO: For several years, many considered Seluah to be Louisville’s great lost band. Were the members aware of their legacy?

AK: I’ve always thought we were a good band — an original and soulful band. But I never thought much about any legacy. The small number of people who happened to see us play back in the day and the people who bought our old EP have always been very supportive and vocal about their appreciation. Sometimes I wonder about those six lost years, what could’ve been had we stayed together, but I listen to what we’ve done on Red Parole, I hear how intense it is, and I believe all our crooked respective paths were necessary to get us to this destination. And I don’t wish to be anywhere else.