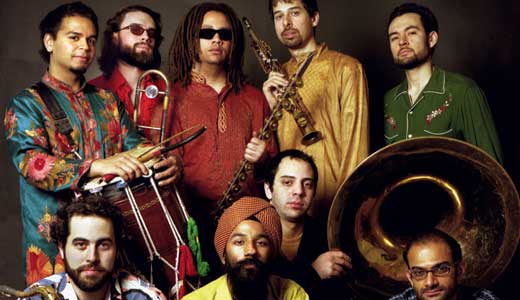 The nine-piece Brooklyn-based “dhol ’n’ brass” band Red Baraat has turned heads in their four years together, fusing traditional sounds from India with inner-city funk rhythms, utilizing only brass and percussion instruments. Their second studio album, Shruggy Ji, will be released later this year. LEO asks dholi Sunny Jain about how they operate.

LEO: Kentucky audiences might recognize some of your formula from New Orleans jazz or marching bands, or Latin salsa dance bands; Red Baraat fuses this with some traditional Indian sounds, Bollywood riffs as well as dining favorites. How much of this fusion was calculated to bring in a larger audience, as opposed to focusing on one genre and appealing to just that audience?

Sunny Jain: Yes, you’ll definitely hear some of what you described, but the truth is, having seen brass bands in the streets of India during childhood visits, I wanted to meld those sounds with the American sounds of funk, jazz, go-go, hip-hop, rock. Red Baraat was really something that was a natural progression in my creative process. For me, music serves as a bridge for the two cultures I grew up with — the Indian culture and American culture. Growing up, I had always had difficulty balancing or intertwining these two cultures, and music has always served as my expression and attempt to deal with that.

So while I was leading a jazz quartet as a drum-set player for the past 10 years, I found myself gravitating toward the dhol drum. In the fall of 2008, I started up Red Baraat with the intention of creating a large, acoustic band that brought a powerful, primal sound. As I started thinking of instrumentation, I also knew I wanted a wide variety of musical voices, and to make up the sound of Red Baraat with no electrified instruments — just drums and horns. It’s the guys in the band that collectively make up the sound of Red Baraat.

Regardless of musical background, one will find something to connect with in our sound. It’s a real musical collection reflecting global unity, which is not only found in the make-up of the band, but also in our fans.

LEO: For those not yet familiar with words like “dhol,” can you explain it and how it helps define your sound?

SJ: The dhol is a barrel-shaped wooden shell drum with two heads: one high and one low. It slings over my shoulder and hangs about waist-high. I play the drum with two sticks. The high side is played with a very thin bamboo stick, and the low side with a thick, curved stick. The dhol is synonymous with Punjabi culture and Bhangra music. It’s a loud, festive, outdoor drum, and it dates back to the 15th century in India. The dhol drum is the signature sound of the band.

LEO: You made a very good album in a studio, then went back and put some of those same songs on a live album that does a better job of capturing the true live essence of the band. Now you’ve raised money through Kickstarter for a second studio album. Why did you decide to record again in a studio?

SJ: Recording live and in a studio are two different animals, and I think we’ll continue to do both. I enjoy recording in the studio because it allows us to experiment with a composition. It then also gives me that great opportunity to experiment with the music in post-production, which sometimes leads to new ways in approaching a song. Recording in the studio is much more of a project and process that requires more time and thought dedicated to what I want the “original” version to sound like.

A live recording is different in that we are much more focused on playing the show and, typically, we are playing songs that we have already learned, as opposed to experimenting with the arrangement, like in the studio … Now, that’s not to say that a live recording isn’t given proper attention or isn’t as important. That’s definitely not the case. It’s just that there are different focuses with either approach. Another key difference is that since improvisation is a key component to our music, we will typically stretch out our songs a bit more during a live show.