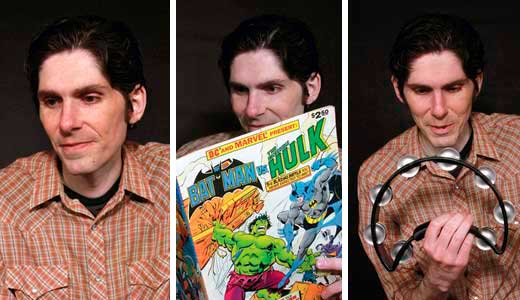 So fresh, and so clean

Radio is one medium that has continued to thrive despite the huge changes in our music-consumption habits. We’ve been very lucky to have DJ-driven shows on Louisville’s WFPK like “World Force Reggae,” “Roots ’N’ Boots,” “Woody’s Roadhouse,” “Relics,” and “The Weekly Feed.” Many of you already know DJ Matt Anthony, with his classic radio voice and gift for digging through record crates to assemble the perfect playlist. Matt hosts “The Friday Night Sound-Clash” Fridays at 8 p.m. and “Jazz Pulse” Sundays at 1 p.m.

“Sound-Clash” has presented major shows on the history of sampling, retrospectives of R&B and soul artists, and the music of the Civil Rights movement, plus guest spots with numerous local musicians. Matt also co-hosts the live “Meat on Mondays” (at Meat), “Girls vs. Boys” (bi-monthly at the Monkey Wrench) and “Rock Star DeeJays” (monthly at the Mag Bar).

LEO: How would you define the new “Jazz Pulse” show?

Matt Anthony: My major was in history, and I’ve heard jazz referenced as museum music. But I love museums — I travel great lengths for exhibits. There really isn’t anything that regularly showcases the last full century of recorded jazz. Great music is timeless — Billie Holiday and Charlie Parker will never sound passé. I like to play stuff from the ’20s and this millennium, or Africa and Brazil in the same show; interconnectedness is a running theme in both shows. It’s had me really explore jazz.

(Hip-hop) is the evolution of the jazz movement and explorations in rhythm, kind of reducing music. James Brown basically stripped Western music of its melody and concentrated fully on rhythm. That’s the heart of funk music. And rap got into stripping it down. You think about music — most lyrics rhyme, so rapping is basically just rhythmic singing. Plus, when you strip melody away from music, it gets real danceable.

MA: So funk is also dance music. That evolved into disco, which was too monotonous, so the rappers started to further explore funk, and rhythm, polyrhythms. Latin musicians know all this stuff. In the early ’80s, New York public school funding for instruments dropped, music programs got cut during the time of Reaganomics. These New York kids didn’t get horns at 10 years old, or saxophones at schools. So they just developed music with what was around them — turntables and a microphone. They were doing it with vinyl records, then they began to do it with keyboards and drum machines and utilizing all the new technology. That was what all brewed into early hip-hop. And this was done by primarily the children of Caribbean immigrants. I like to explore all this on “Sound-Clash.”

LEO: To be a good DJ, you have to be able to appreciate all kinds of things. So, a whole new generation of people discovers Ornette Coleman or something new to them. A lot of pop music culture likes to pretend like it has no background, but with hip-hop, there’s a level of respect, a knowledge of history.

MA: That’s why I go back to the exploration of rhythm. That’s what the DJs would do. They would take anything, whether it be rock, jazz, and find the tightest rhythm, the tightest hook in it, and then play it into the ground. What Grandmaster Flash and Afrika Bambaattaa were doing with early samples was stripping everything else out of the music to find something new. Run-D.M.C. probably spelled it out most succinctly … Everyone knew “Walk This Way,” but if you took that first riff and repeated it, it just got crazier, people got more amped. When the early digital samplers/keyboards were created, they found new rhythms everywhere. Look at the samples on LPs by A Tribe Called Quest and De La Soul. I mean, they found the funk in Hall and Oates! They could find the funk anywhere (laughs). Don’t leave any funk on the ground ’cause a hip-hop sampler will find it and make a song out of it!