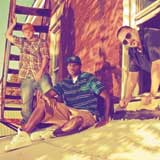 If only the disc lived up to its title. It’s difficult to pinpoint exactly what doesn’t work; it may be as simple as the effort showing so clearly. The production and topics are varied, but the seams are so evident, one can see the checklist on the wall. Sure, this is a flaw in many releases (Club track? Check. Reflective song? Yep. Girl song? Done. Feature? Of course.), but it’s still disappointing. Nearly half the record features R&B-flavored hooks, with only one working. “A Soldier’s Story” gives a glimpse into why Basement Up needs to keep making music; a hip-hop song about military deployment isn’t on anyone’s checklist, which is why it works so well. The emotion is palpable, the writing so honest. For one song, at least, they weren’t a “rap group” — they were Basement Up.