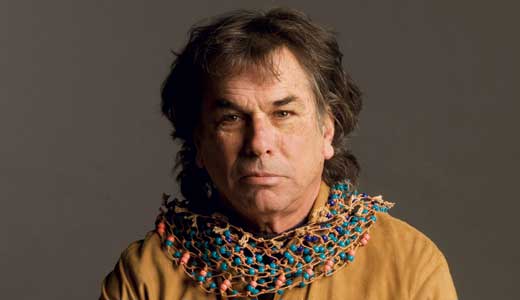 Forty-five years ago, drummer Mickey Hart sat in with the Grateful Dead, and the rest is history. Hart brought a second drum set to the Dead, and also an appreciation for Indian music and odd time signatures. In 1972, Hart began releasing diverse solo and collaborative projects, including 1991’s Planet Drum, which won the first “world music” Grammy. Smithsonian Folkways now handles his catalog; download a free, 10-song sampler at mickeyhart.net/download.

Hart’s new album, Mysterium Tremendum, will be released on April 10, the same day his “Above the Clouds Tour” begins in Louisville. LEO interviewed an ebullient Hart by phone. Hart began by asking where the interviewer was. When told “Louisville,” he recalled with pleasure the Dead’s 1990 Cardinal Stadium concert, commenting, “It’ll be nice to be back there.”

LEO: I know you’re anxious to talk about your new project —

Mickey Hart: (laughs) Let’s just talk of my past, I don’t want to do any current interview about my new stuff.

LEO: How do you adapt Mysterium Tremendum’s rich, multi-layered studio recording for the road?

MH: That was part of the challenge of being able to realize my vision in front of a lot of people and have fun doing it. I’m a studio rat — I just love the studio. That’s where I create all these complex and often hard-to-find ideas to play in performance. So I had to create an instrument, an interlocking system with the whole band, to be able to go out there and make it just like rock ’n’ roll — you know, easy. Just go out there and play … So we created RAMU (Random Access Musical Universe, a computer or “sound droid”), which has been in creation for 25 years.

RAMU is now smart enough and facile enough and fun enough to play with every night. RAMU allows me to access all these universes — a raging storm out at sea, or an elephant, or a gamelan, or any kind of instrument that would be impossible to put on stage, or any kind of sound that would not be able to exist in that environment, (by) punching a button. Also, I wanted to play drums. I like performing, I like hitting an instrument and getting a report over it, and I love the rush of that kind of environment, the sound and experience. So that’s what we were able to do, to create this soundscape every night … the concept of dancing with the sounds of the epic events of the universe, interacting with the celestial spheres and making music with it, meaningful music, to be able to enjoy yourself and be able to interact with these seed sounds, some 13 billion years old.

LEO: How did the new songs on the new CD come about?

MH: Some of the lyrics were mine, some by Robert Hunter. And this band is very fertile — the musicians are responsible for the beauty of this recording in many ways. I have files of songs, and when I come up with new ideas, I match them. Words, if not set in the right musical context, lose their power. With Hunter, normally I don’t give him subject matter; this time, he went away and wrote on the theme of man and the universe, which is what this is about, and I made this into some kind of space odyssey.

LEO: How do you handle expectations that you will integrate Grateful Dead music into your own performances?

MH: There are some parts of the Grateful Dead that are more appropriate for this band to play. I want to rediscover it and make it fresh, and that’s what this band is capable of doing. The whole night is a kind of sonic adventure, it’s part of a journey.

Hart closed by talking of his passion for “bringing music to the people,” saying, “We feel that the music is uplifting to the consciousness, that we have a service to perform, that it’s a responsibility to bring joy and pleasure and community to our audiences.”