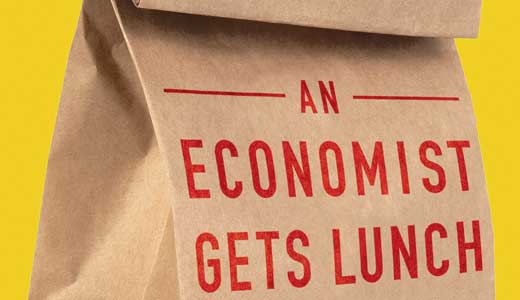 Tyler Cowen’s new book, “An Economist Gets Lunch: New Rules for Everyday Foodies,” is an easy read that takes us around the culinary world in 260 pages. We hit just about everything, from street food in Leon, Nicaragua, to three-star Michelin dining in Germany. Cowen, a self-described foodie, offers an outside-the-box take on how to sniff out the best eats wherever you land, with or without the benefit of a guidebook.

Although Cowen’s scope tends to sprawl, his Freakonomics-style pointers are often cleverly counter-intuitive, like: If a restaurant’s patrons are mostly beautiful and having a great time, “run the other way.”

Cowen reasons that buzzy establishments with thriving social scenes are probably concentrating less on cuisine. The reverse of that is also true: an arguing couple or family is a good sign. (If they feel comfortable enough to air things out in public, they have likely eaten here before and return for the food.)

Cowen offers city-specific tips worth testing for oneself, like: French food is comparable and more affordable in Tokyo than Paris; ethnic restaurants on narrow, Manhattan streets beat those found on wide avenues; fish-and-chip shops in New Zealand trump London’s; and, “If you can’t name a famous landmark in an Italian city, it is likely to have superb food at affordable prices,” (unlike busy tourist destinations, where restaurants make rent by feeding travelers unremarkable, high-volume meals).

The book’s stirring mantra, “make every meal count,” is also applied to grocery shopping and home cooking. But, for as likeably instructive as Cowan is, his tone turns on a dime about midway through, when he chooses to take on locavores.

Most of “An Economist Gets Lunch” is about delighting in local specialties while visiting all corners of the globe. But when it comes to eating at home, the expectation on the locavore suddenly shifts, unrealistically, to saving and feeding the entire planet. It is here that Cowen pits Big Ag and GMOs against locavores, often reading like a Monsanto apologist.

Cowen writes, “It is nature that is cruel and harsh, not Monsanto.”

This view of the Agent Orange producer is laughable — bordering on gag-worthy. Monsanto’s many controversial agriculture products include genetically modified organisms, the “terminator seed” that circumvents nature’s ability to replenish itself, and recombinant Bovine Growth Hormones, and for many Vietnamese and some U.S. servicemen, the words Monsanto and Agent Orange are the definition of harsh.

Cowen acknowledges that the corporation’s “extreme patent protection” may be unfair to indigenous farmers around the world who are now charged for seeds that have been part of nature’s bounty for centuries. But he adds that we shouldn’t “blame the wrong culprit” or continue to ignore the favorable numbers behind Monsanto’s products.

Math and the environment are what forges Cowen’s — and most other writers’ — critique of the local first movement, which does yield useful ideas that shouldn’t be ignored. For instance, Cowen is right about food miles: products transported on planes and boats should be viewed differently because their fossil fuel use is so different. (Ships are relatively efficient.) He is also correct when stating that agri-business has saved countless people from starvation and cannot be eliminated from the broader conversation on feeding the world — not that locavores are advocating this.

When Cowen writes about “outdoing the locavores,” he is promoting a healthy discussion about food. Locavores should try to outdo themselves as well. However, the economist seems overly dismissive of this group in the interest of sounding contrarian, using terms like “misguided,” “paternalistic,” “pessimistic” and “anti-innovative.” Worse, Cowen lumps all locavores in with “food snobs,” when, at times, he is guilty of his own coastal, big-city bias.

The Washington, D.C., native argues that produce shipped great distances by boat is environmentally preferable to that from local, small-scale purveyors who must truck two hours to market. He writes this as if it is always the case and as if the locavore is incapable of making these calculations for herself. Cowen also neglects cities like Louisville, situated much closer to its farms and nearly 800 miles from the Hunts Point Terminal in the Bronx. If you’re counting food miles at home, that’s probably a two-day journey by tractor-trailer after your veggies are unloaded from the ship.

Taking locavores to task has become something of a mini-genre, with op-ed titles like “It’s Time for Locavores to Shut Up,” by NPR’s Amy Stewart, and “Math Lessons for Locavores,” by Stephen Budiansky, becoming common. Writer James McWilliams has built a career on this practice, authoring the 2009 book “Just Food: Where Locavores Get it Wrong,” and related essays published regularly in The New York Times, Atlantic Monthly and on the Freakonomics website.

Wanting to adjust the naïve belief that eating local always reduces one’s carbon footprint is a good thing. It is also right to question this increasing level of backlash and highlight when it’s unfair. In one Freakonomics post, McWilliams questions the value of farmers markets on our communities, predicting that the “mystique of the local farmer” will diminish once locavores realize that what they’re engaged in is an economic experience. What seems naïve here is the idea that locavores don’t already understand that money changes hands during these transactions, or that the “economic experience” of patronizing a neighbor’s fruit stand doesn’t just keep dollars away from Big Ag, but closer to our communities.

Cowen makes similar presumptions about what locavores do and don’t get. He has fun pointing out that we will need to use our cotton shopping totes 171 times before they match the environmental benefit of one plastic bag. An eye-catching number, yes, but it’s Cowen who starts to sound paternalistic, adding “we can’t trust our intuitions,” because consumers can’t “see” the true environmental costs of their decisions. I wonder if the economist has ever “seen” a cloth shopping bag caught in a tree on a windy day. I haven’t, but I can’t say the same for the plastic variety he promotes.