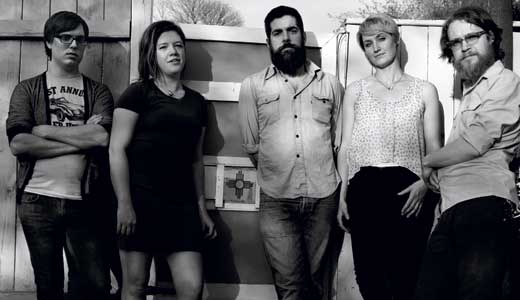 Having performed with singer-songwriters Ben Sollee and Daniel Martin Moore, and with vocal folkies Maiden Radio, and after starting a new relationship and a new band of her own, singer-songwriter and guitarist/banjoist Joan Shelley is in a much different space now than when she released her first solo album in 2010. Shelley welcomes the release of her second album, Ginko, a more experienced and assured follow-up, with her band, the June Brides, at the Rud on Saturday.

LEO: How have you grown from the first to second albums?

Joan Shelley: When I recorded the first record, I had only recently moved back to town and was just starting to meet the people I know now. While finishing up that record, I started playing the banjo more with the girls in Maiden Radio. I then met (guitarists) Joe Manning and Nathan Salsburg, and shared the stage a few times with Ben Sollee and Daniel Martin Moore. After two years, I’d gotten to marinate in some of the rich musical talent of this city, watching and listening to my friends and their music — original music and record collections.

When we recorded the second album, a lot of those friends came in to work on these songs with me. Their influence has been a crucial change in the sound of the albums. Then, my songwriting style is always changing alongside that.

LEO: This album was recorded more than a year ago. What took so long?

JS: The recording was completed over the course of two months. Once we finished it, there was the question of how to find enough support to release the record in a way we thought it deserved. The record labels I knew before were not biting. And it was jarring to leave the recording world, where we worked hard to make something graceful and beautiful, and then try to be the salesman for it. Some people are really good at that. I hope to improve. The happy ending to our story is that the record found a nice place on Daniel Martin Moore’s new label, Ol Kentuck. It’s small and new, but he’s sharp, and I trust him and like to work with him. I consider those the most crucial points in any arrangement like this, especially when the focus is creativity in music or any art form.

LEO: Do you still feel as connected to these songs?

JS: I am, very much so. Playing them with the June Brides has made these songs new creatures. Now we get to focus on the arrangements and instrumentation. Then I’ll stumble back upon the lyrics and their meanings. It’s interesting.

LEO: Your boyfriend (Joe Manning, a LEO columnist) is also a songwriter, singer and guitarist. How competitive, or cooperative, is that for you both?

JS: I can be competitive, but not so much with him. We don’t approach creative tasks the same way; his style is much different — his approach to songwriting, his guitar playing. We’re bound to have strong opinions about the same things. But, thankfully, we’re pretty adaptable and complementary to each other. He’s my No. 1 when I need a second opinion. Now he’s joined the June Brides once again, and it’s really filled out the band in just the perfect way — we’re all so glad to have him. We do group high-fives all the time. Or, at least, the sentiment is there.